Biblical Sites in Turkey and Greece in their Ancient Context

I don't remember when I realized that with a few exceptions the maps in the back of my NIV Bible only listed places mentioned in the Bible. Obviously there must have been other settlements, but for those who haven't studied ancient history, your average Study Bible map can convey the impression that Attalia and Perga were the only cities in ancient Lycia. That's why I try to set Biblical sites in the broader context of the ancient world by showing my students maps like this one (click on the map for a larger image):

The first map, however, only gives part of the picture. Here is a screen shot of Asia Minor, courtesy of the Pelagios Project that is hosted by the Ancient History Encylopedia: 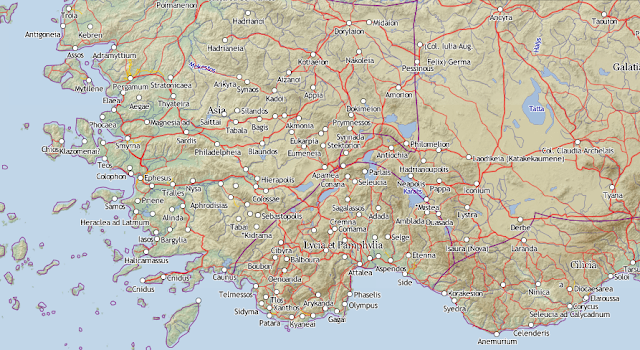 Whence comes my interest in Asia Minor? Two weeks from today, participants on Briercrest's "Following Paul in Turkey and Greece" Study Tour will arrive in Istanbul. We will fly from there to the modern-day counterpart to ancient Attalia, and visit the sites included on the map below: 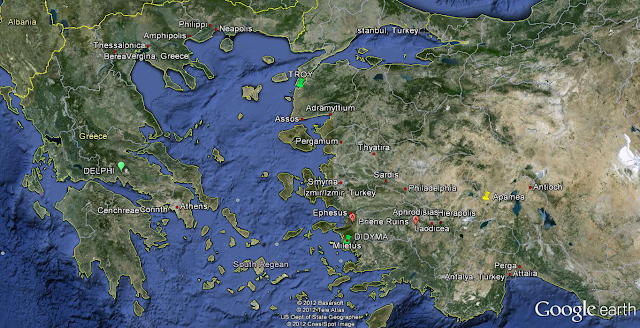 Concerning the "Gate to Hell" in Hierapolis

Slow news day today: Reports are circulating about the discovery of a "Gate to Hell" in connection with the Temple to Apollo in Hierapolis: CTV news gushes "The mythical -- and, let's face it, horrifying -- "gate to hell" has finally been discovered in a cave in Turkey."  The source is, apparently, this Discovery Channel report, which has been picked up by the Huffington Post among others. Let it be known that I was there first, and reported on it back in 2007:


We were especially interested in the temple because the Blue Guide reports that "During the excavation, work was impeded considerably by noxious gas which seeped from the foundations. It was found that this gas originated in the Plutonium...a sanctuary dedicated to Pluto, the god of the underworld." The poisonous gas emanating from the Plutonium was well-known in antiquity. In the late 2nd or early 3rd century the Roman historian, Dio Cassius, "tested its lethal properties on birds" and "remarked also on the apparent immunity enjoyed by eunuchs" (Blue Guide 277). After what the guide books had to say, I imagined the Plutonium would be quite the tourist attraction, but the site is now overgrown with grass and is not exactly well-marked. The Lonely Guide comments that the gas "is still deadly poisonous. Before the grate was installed there were several fatalities among those with more curiosity than sense." Suitably warned, I took this picture using my camera's telephoto lens.

For pictures, see the original post from my Turkey Travelogue.

Whether or not there is anything new to report, I'm really looking forward to returning to Hierapolis with the Briercrest Turkey/Greece study tour next month.
Posted by d. miller at 9:03 PM No comments: