The single most helpful book I have read on approaching the Bible honestly as a Christian is John Goldingay's Models for Scripture (Eerdmans / Paternoster, 1994). Although it left a lasting impression and I eventually acquired--and then lost and found--my own copy, I have seldom referred to it since I first read it in 2001 or 2002. At the time, however, Goldingay was a good Samaritan who stopped to help a broken-down stranger on a lonely road.

I don't have my copy of Models for Scripture with me to review, reassess, and excerpt. But the gist of Goldingay's nonpartisan approach to the Bible is incapsulated in this reflection on his students:

If there are no aspects of scripture that they do not like and do not have to wrestle with, then they are kidding themselves. It means that they have bracketed them out or reinterpreted them. That is what as evangelicals we have to do. We know we have to accept all of scripture, so we make it mean something else so we can accept it. As a Bible teacher one of my basic concerns has become simply to get people to read the Bible with open eyes. Some people learn to, others do not. I want people to read the Bible, to be open to finding there things that they had not realized were there, to be enthralled and dazzled and appalled and infuriated and puzzled and worried and stimulated and kept awake at night by these extraordinary words from God, to let their mind and heart and imagination and will be provoked and astonished by them. - John Goldingay, To the Usual Suspects: One Word Questions (Paternoster, 1998), 153-4.

Long-time readers of this blog may recall encountering the same quote back in 2008. My students may recognize the quote from class (where I usually add that I'm not anxious for them to be appalled or infuriated by the Bible). Other references to Goldingay on this blog are collected here.

"Nonpartisan," "evangelical," and "scholarship" are, it would seem, three words that do not belong together. In today's political climate when the term "evangelical" appears to be joined at the hip with the Republican party, Scot McKnight advocates abandoning the label, and even Tim Keller wonders if it may have no "ongoing usefulness." (If evangelical means support for Donald Trump, I want no part in it either.)

Evangelical biblical scholarship is alive and well, but it is often regarded as--and dismissed by outsiders for being--partisan. While there is a place for apologetics, I share a distaste for the variety of evangelicalism that reflects a siege mentality, an us-them divide between evangelicals and "secular" critical scholars, and a drive to defend the authenticity of Scripture and certain doctrinal positions that we know to be true.


Rather than being defined by a defensive ethos or by political affiliation, evangelicalism has historically been characterized by four commitments:


"[A]n evangelical is committed to these four elements: the Bible, the cross as the place of atonement, the necessity of personal conversion, and an active Christian life both in missions/evangelism as well as justice, peace and reconciliation." (Scot McKnight summarizing David Bebbington's quadrilateral)

It is probably safe to say that the term has always been contested by insiders, and viewed with suspicion, if not contempt, by outsiders. And it may be the case that "evangelical" should now be discarded because it no longer conveys anything like Bebbington's quadrilateral.

I begin with Frederick Fyvie Bruce, the doyen of an earlier generation of evangelical scholars, who adopted a scholarly posture marked not so much by vigilant defense as by attention—listening carefully to the text and to other people both inside and outside his tradition.


On being an (unqualified) evangelical:


"I am always happy to be called an evangelical, although I insist on being an unqualified evangelical. I do not willingly answer, for example, to such a designation as ‘conservative evangelical’. (Many of my positions are indeed conservative; but I hold them not because they are conservative – still less because I myself am conservative – but because I believe they are the positions to which the evidence leads.)” - F.F. Bruce, In Retrospect: Remembrance of Things Past (Grand Rapids: Eerdmans, 1980), 309.

On the posture of an evangelical scholar:


"A sense of security with regard to the foundations of faith and life encourages a spirit of relaxation with regard to many other matters. I am sure that an inner insecurity is often responsible for the dogmatism with which some people defend positions which are by their nature incapable of conclusive proof: there may be a feeling that, if those positions are given up, the foundations are in danger. I am sure, too, that a similar insecurity is responsible for the reluctance which some people show to acknowledge a change of mind on matters about which they once expressed themselves publicly: they may fear that their reputation for consistency is imperilled if they do . . . . Ultimately, the Christian’s faith is in a Person: his confession is ‘I know whom I have believed’, not ‘…what I have believed’ . . . . With this sense of liberty one can write freely – which is not the same thing as writing irresponsibly. A Christian will consider the probable effect of his words, whether spoken or written. (In Retrospect, 172-3)


“I suppose much depends on the cast of one’s mind, but I have never been bothered by ‘apparent discrepancies’, nor have I been greatly concerned to harmonize them. My faith can accommodate such ‘discrepancies’ much more easily than it could swallow harmonizations that place an unnatural sense on the text or give an impression of special pleading. If the ‘discrepancies’ are left unharmonized, they may help to a better appreciation of the progress of revelation or of the distinctive outlooks of individual writers” (In Retrospect, 312).


"No such conclusions [he is referring to pre-Vatican II Roman Catholic biblical scholarship] are prescribed for members of the Tyndale Fellowship. In such critical cruces, for example, as the codification of the Pentateuch, the composition of Isaiah, the date of Daniel, the sources of the Gospels, or the authenticity of the Pastoral Epistles, each of us is free to hold and proclaim the conclusion to which all the available evidence points. Any research worthy of the name, we take it for granted, must necessarily be unfettered." (F. F. Bruce, “The Tyndale Fellowship for Biblical Research,” The Evangelical Quarterly 19 (1947) 52-61) (HT: Michael Bird, who got it from Dan Reid)

I should note that I am not sure how representative Bruce was in his day, or how many of his fellow evangelicals supported his manifesto for the Tyndale Fellowship. (Some apparently did not.) But of Bruce's positive influence on evangelical scholarship there can be no doubt.

"John Baillie's own religious experience, as he spoke about it quite freely in lectures and private conversation, included at one time a profession of atheism--particularly during the heady willfulness of his university days. But in recalling that period of 'atheism' in his life, he always added:


'I never was, however, really an atheist. In fact, there were a number of things that I wanted to hear from God. And I wondered why he did not speak more plainly. But there were also a number of other things that I did not want to hear from God. And my deafness in the one area extended over into the other area, and so I proclaimed that I was an atheist'

Email ThisBlogThis!Share to TwitterShare to FacebookShare to Pinterest
Labels: Theology

Highlights from the British Museum

I made it out to the British Museum with my daughter last weekend, enjoying our first London Tube ride along the way. S., along with a crowd of other people, was excited at the prospect of seeing the archaeological discovery that enabled scholars to decode Egyptian hieroglyphs:
After visiting Athens in 2013, I wanted to see the Elgin Marbles that used to adorn the Parthenon. (At the beginning of the 19th century, Lord Elgin received permission from the Ottoman government to take away "pieces of stone with old inscriptions or figures thereon." The priceless rock he carted off surely exceeded what the Sultan had in mind.) 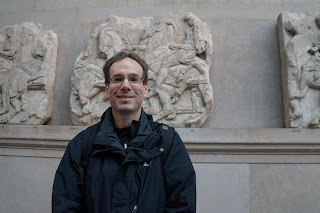 The Egyptian exhibits were stunning, as one would expect:

But I was most surprised and astounded by the Assyrian artifacts. Here, for instance, is a Lamassu from Khorsabad that apparently goes back to the reign of Sargon II in the late 8th century BCE:

More exciting still is a series of wall panels depicting Sennacherib's siege of Lachish in 701 BCE: 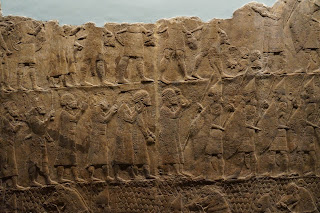 Sennacherib's capture of Lachish is mentioned in Isaiah 36:1-2; it is also described first-hand in a series of letters inscribed on ostraca that were discovered when Lachish was excavated in the 1930's.

On a final dash through the second floor, I snapped pictures of various 1st-century Roman emperors for use in class:

If it were not for the incentive of seeing real mummies... 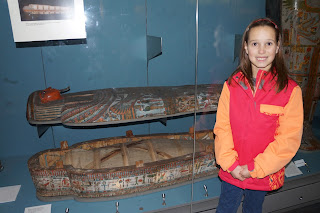 ... we would have missed the Cyrus Cylinder, which describes Cyrus's policy of repatriating subject peoples to their homelands:

Admission is free, so it is churlish to complain that the museum is simply too large to take in on a single visit. The contents could easily be divided into a half-dozen world-class museums. 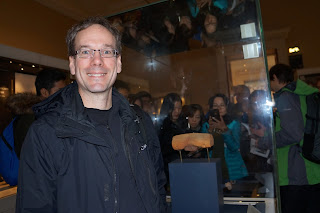 I guess that means I'll need to go back.
Posted by d. miller at 4:09 PM No comments:

Baker, Cynthia M. Jew. Key Words in Jewish Studies 8. Rutgers University Press, 2017. (See the Marginalia Forum on Baker's book here.)
Glinert, Lewis. The Story of Hebrew. Princeton University Press, 2017. (Positive "review" here.)
Goodman, Martin. A History of Judaism. Allen Lane, 2017. (Anything by Martin Goodman is worth reading. See Simon Rocker's review here.)
Mason, Steve. A History of the Jewish War: AD 66-74. Cambridge: Cambridge University Press, 2016. (I'm curious to read Mason and Goodman side-by-side.)
It's a reading wish list both because I'm living through a book-buying deep freeze, and because with such a long list of books on my "to read" list, I am not sure when these will make it to the top. Since when does a book get to jump the queue over all the other eligible volumes just because it has a 2017 publication date?
Posted by d. miller at 4:05 PM No comments: