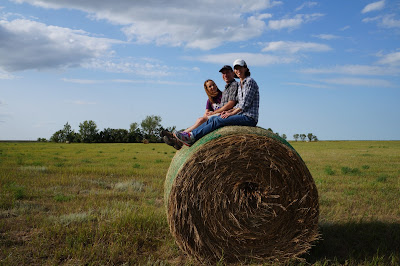 Two years ago we left the wilderness of southern Saskatchewan for the temperate climate and spectacular libraries of Cambridge.

The trip was a real growth experience. This photo was taken in mid-August 2017, shortly before we left: 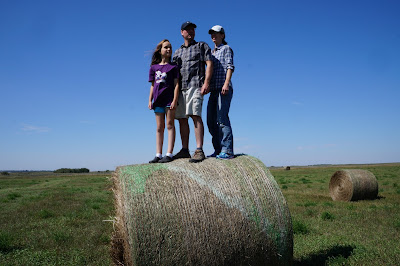 And here we are at the beginning of August 2019, a few days after we returned: 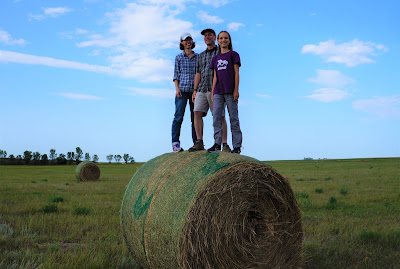 In other respects too, our trip was a success. (See this post for why we were there.) But even an academic’s paradise can seem arid and sterile after a while, and I confess to being glad to have left the Cambridge bubble behind for the real world of our isolated little prairie college town.

It’s nice of course to be back in our own comparatively large house with our own stuff, but I also missed the face-to-face interaction that teaching provides as well as the sense that what I was doing—aside from being a husband and father—mattered.

Call it late summer idealism, if you will. Classes begin next week and I know the thermometer will dip as low as -20 in November. At the moment, however, I am grateful to be back in “a community of learning that calls students to seek the kingdom of God, to be shaped profoundly by the scriptures, and to be formed spiritually and intellectually for lives of service.“
Posted by d. miller at 7:20 AM No comments:

Martin Luther: If you value the gospel, learn Greek and Hebrew

My clickbait title is admittedly a paraphrase, but I think it gets at (part of*) the substance of what Luther actually said:


"For though the Gospel has come and daily comes through the Holy Spirit alone, we cannot deny that it has come by means of the languages, by which it was also spread abroad, and by which it must be preserved. ... In proportion, then, as we prize the Gospel, let us guard the languages. For not in vain did God have His Scriptures set down in these two languages alone—the Old Testament in Hebrew, the New in Greek. The languages, therefore, that God did not despise but chose above all others for His Word, we too ought to honor above all others. ... And let us be sure of this: we shall not long preserve the Gospel without the languages. The languages are the sheath in which this sword of the Spirit is contained; they are the casket in which we carry this jewel; they are the vessel in which we hold this wine; they are the larder in which this food is stored; and as the Gospel itself says, they are the baskets in which we bear these loaves and fishes and fragments. If through our neglect we let the languages go (which may God forbid!), we shall not only lose the Gospel, but come at last to the point where we shall be unable either to speak or write a correct Latin or German. As proof and warning of this, let us take the wretched and woeful example of the universities and monasteries, in which men not only unlearned the Gospel, but corrupted the languages so that the miserable folk were fairly turned into beasts, unable to read or write a correct German or Latin and wellnigh losing their natural reason to boot. ... Hence it is certain that unless the languages remain the Gospel must finally perish." - Martin Luther, "To the Councilmen of All Cities in Germany That They Establish and Maintain Christian Schools" (1524) as quoted by Michael Gilleland.

* The other part could be paraphrased thus: If you value the gospel, encourage the study of the biblical languages by others if you are not able to study them yourself.