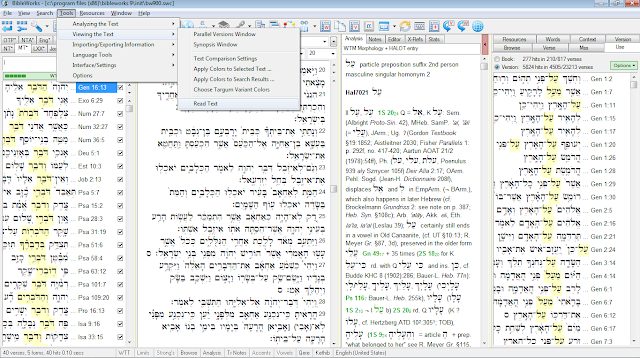 I was looking around in BibleWorks 9, and noticed a "Read Text" option, which sounded neat because I occasionally want to double check my Hebrew pronunciation. Evidently "Microsoft Anna" has yet to learn Hebrew:

(I'm really pleased with BibleWorks 9, by the way. A recording in the original languages was probably too much to hope for.)
Posted by d. miller at 9:05 PM 4 comments:

On Friday afternoon I decided to post something by C.K. Barrett. Before I got around to it, the news came that he passed away at the age of 94. Barrett was one of my academic heroes. He published his first book in 1947, his magisterial two-volume commentary on Acts 50 years later in 1994 and 1998. Barrett's The Gospel of John and Judaism was originally delivered as a series of lectures in German. The preface to his Romans commentary describes the "sustained enthusiasm and even excitement" he experienced reading Luther's 400 page Scholia on Romans...in Medieval Latin. Robert Morgan's tribute to Barrett at 90*, mentions Barrett's close familiarity with Barth's Dogmatics; his preface to Romans says of reading Barth's commentary: "If in those [undergraduate] days, and since, I remained and have continued to be a Christian, I owe the fact in large measure to that book, and to those in Cambridge who introduced it to me." One of "those in Cambridge" was Francis Noel Davey, about whom Barrett wrote:


This is the first book I have published with S.P.C.K. since the death of its former Director, Dr Francis Noel Davey, and I cannot send it out without recording a sense of obligation that I shall never lose. It was in 1936 that I carried my first New Testament essay along Trumpington Street from Pembroke to his rooms in Corpus, and began an association that grew steadily in depth and in warmth. Information about the New Testament I had to collect for myself, but he more than anyone else helped me to see that to collect it, however great the labour, and to understand it, and the book itself, was the most responsible and rewarding task any scholar could undertake. He published my first book; and through the years a letter from him, the rare opportunity of conversation, have never failed to rekindle the flame. I can no longer thank him; but I am thankful to God for him. - C. K. Barrett, The Gospel of John and Judaism (London: SPCK, 1975), ix.

Barrett was a fine writer and he wrote a lot, and what he wrote is still worth reading because it was backed by scholarly substance. He had unmatched scholarly chops.
______________
*Morgan's tribute to Barrett, published in The Expository Times 199.6 (2008): 226-228 is behind a pay wall, but it is well worth looking up a library copy.
**Also, I have reluctantly updated my list of nonagenarian NT scholars.

I'm looking for a little technical help: When James McGrath published Episode I of his September Biblioblog Carnival a couple weeks ago, I noticed that Jason Staples had responded to my first post on Jewish ethnocentrism with a post of his own. Blogger used to send out messages when someone linked to one of my posts, but the service 'broke', as I recall, when they started sending notifications every time a blogger who included my blog on their blogroll posted something.

I was sorry to overlook Jason's post, so I subscribed to his blog, tried signing up for Google alerts, and turned on Blogger's backlinks service. The trackback service seems to have the same problem as before, and Google alerts don't reliably inform me of my own blog posts, so I imagine they are equally useless in the event that someone else links to my blog.

So to my question: Is there a way to track pingbacks or trackbacks on Blogger or is the only solution to switch blogging platforms?
Posted by d. miller at 4:52 PM 1 comment:

Why Christianity is more ethnocentric than Judaism

This post tries (just as provocatively) to flesh out a bit of what I left unstated here...

A moment’s reflection will show that “Christianity” shares the six characteristics that Hutchinson and A. Smith claim ethnic groups ‘habitually exhibit’:


(1) ‘a common proper name’: Christian, etc.
(2) ‘a myth of common ancestry’: ‘in Christ’ – Christians are called “children of God” by their participation in Christ. Just as God created Israel from the barren seed of Abraham, the New Testament affirms that God created a people of God from the Messiah. Denise Kimber Buell argues that the language of kinship in early Christian texts was considered real rather than metaphorical.
(3) ‘shared historical memories’: The story of Israel and of Jesus.
(4) ‘one or more elements of common culture’: Check.
(5) ‘a link with a homeland’: ‘Our citizenship is in heaven.’
(6) ‘a sense of solidarity’: Check.

According to 1 Peter 2:9, Christians ‘are a chosen race . . . a holy nation’. As with other nations, membership in the Christian ‘people of God’ is exclusive. New believers have to abandon their previous ethnic culture and polytheistic way of life to join in, and, as a result, they are no longer Gentiles/ ‘nations’. The Gospel of John suggests that love for members exceeds love for outsiders. Indeed, Christianity is more exclusive, more particularistic, more ‘ethnocentric’ than Judaism because orthodox Christianity holds that final salvation is limited to insiders, while normative Judaism expects righteous Gentiles to have a place in the world to come without having to become Jews (see Sanders, Donaldson, Runesson).

Note: My observations here are exploratory. My main point is to critique the common Christian denigration of Judaism as nationalist/particularist. Whatever Christianity is, it is not universal.

I just had time to skim my former classmate Love Sechrest's published dissertation before returning it (late) to ILL. This excerpt seems to sum up Sechrest's thesis, more-or-less:


"Paul combines in himself both ascribed and voluntary elements of identity, as he things of himself as someone who was born a Jew but no longer considers himself one. That he privileges the voluntary without dismissing the ascribed is apparent from the way that he divides people into three distinct groups - Gentiles, Jews, and believers - while maintaining that the latter two collectives form separate groups of descendants from Abraham (Rom. 4.11-12, 16). Thus, in one sense Paul was both Jewish and Christian given that he was born Jewish and later chose to identify with Christ; but in another sense he was a former Jew, because he did not hold to both of those identities with equal loyalty when he considered the arc of his personal narrative (Phil. 3.3-11)." - Love Sechrest, A Former Jew: Paul and the Dialectics of Race (LNTS 410; London: T&amp;T Clark, 2009), 159.

It's a really interesting argument, one that addresses a clear puzzle in Paul. I especially like her distinction between insider (voluntary) and outsider (ascribed) perspectives on group identity. I look forward to reading the whole thing carefully when I can drum up some time, and either $90 or a review copy--preferably the latter.

Update: I should note Joel Willitts's helpful critical response. Willitts thinks Sechrest "too boldly draws lines between the categories of Religion, Geography and Customs, Lifestyles and Laws", which may well be correct; I will have to check. In response to Joel's second complaint--that "Sechrest engages a narrow swath of scholarly literature"--it's worth observing that she engages helpfully with a wide "swath" of scholarship on race and ethnicity, and her choice of Daniel Boyarin and Caroline Johnson Hodge as conversation partners in the conclusion seems entirely appropriate.
Posted by d. miller at 3:17 PM No comments: 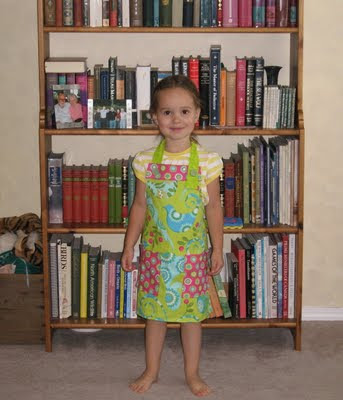 A recent lunch time conversation at the Millers:

d.: That was when Mommy was pregnant. Who was Mommy pregnant with, Shoshana?

Mommy (helpfully): You were in Mommy's tummy.

"...This anachronism is one of the many traces of an unusually clumsy forger, who may have had some genuine text to expand, but who expanded it with palpable absurdities." - Morton Smith, Palestinian Parties and Politics That Shaped the Old Testament (New York: Columbia University Press, 1971), 199.

Smith is referring to an alleged anachronism in a letter recorded in 1 Macc 10.26-45, but his description of forgery will be of interest to those familiar with Stephen Carlson's, The Gospel Hoax (Waco: Baylor, 2005), and the debate about Smith's discovery (?) of the Secret Gospel of Mark.
Posted by d. miller at 10:19 AM No comments:

Timothy Gombis's new book and excellent CT article on Paul seems to have stimulated a spate of positive posts on the "New Perspective on Paul" by evangelical bloggers. The "New Perspective" has taken on an ill-defined life of its own, but it originally referred to a reading of Paul from the fresh vantage point of a new understanding of Judaism instead of from the long tradition of Christian interpretation that--as John Barclay explains it--treated the Jews "in Paul's letters as symbols of something else, normally some negative trait in the human condition." For the sake of comparison, here are some prominent representatives of the old perspective:
(All quotations are from John M. G. Barclay's excellent essay, “Paul, Judaism, and the Jewish People,” in The Blackwell Companion to Paul [Stephen Westerholm, ed.; United Kingdom: Wiley-Blackwell, 2011], 188-201, here 190.)

I am very sympathetic to those who want a perspective for reading Paul that treats Judaism fairly. Perhaps I am prone to over-correction in this regard, since I find myself reacting to one common "New Perspective" construal of what Paul found wrong with Judaism. Consider the following examples:
It is curious that new perspective scholars in the Dunn / Wright tradition still create a negative picture of Judaism as a foil for early Christianity. It may just be me, but the sins Augustine and Luther identify seem more fundamental to the human condition than 'ethnocentrism'. The ideas preach better, and with greater power because they are centred in a big view of God (and in deep elements in Paul's thought) rather than on an admittedly grievous social ill. So if we have to stereotype Judaism, I'll take Augustine and Luther, thank you very much.

But of course, we can try not to stereotype ancient Judaism--which leads me to my next point: What was wrong with Jewish ethnocentrism? What is wrong about the people of God thinking they are the people of God? Isn't that what the Old Testament encourages? Was it even conceivable to think that Israel would be a light to the nations without being distinctive as a people? Would anyone have imagined that God would save all the nations of the earth without their joining the covenant of the people of God? And does Paul ever criticize non-believing Jews for being ethnocentric? (What am I missing?)

Finally, was early Christianity any different? Sure Gentiles were not required to become Jews, but they were required to join 'the people of God'. I submit that first century Judaism was not any more "ethnocentric" than normative Christianity is.