A Few of My Favourite Things: Hebrew Music 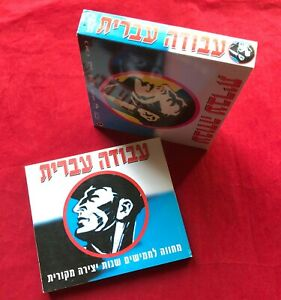 I have been listening to Israeli music for two decades now, starting with the first four-disc Avodah Ivrit collection--picked up in 2001 from a vendor in Tel Aviv's old bus terminal--and moving on to Ahinoam Nini, Shlomo Artzi, David Broza, Ofra Haza, and the fabulous Idan Raichel Project.
Although I seldom sit down to try to make out the meaning of an entire song, bits and pieces of familiar words and phrases have helped me retain more Modern Hebrew than I otherwise would have.
I often play Israeli music in class, normally as unintelligible ambient noise during small group discussions--though in Hebrew language classes it contributes more directly to an immersive environment and I actually hope my students will be distracted by what they hear. But my aims are not simply utilitarian: I enjoy listening to Israeli music, and I hope my students do too.
Here are a few favourite artists and songs, arranged more-or-less in chronological order:
Ofra Haza, the "Israeli Madonna," recorded מישהו הולך תמיד איתי ("Someone always walks with me") in 1985:
(hebrewsongs.com has a transliteration and English translation.)

David Broza also made it big in the 1980's, but my favourite David Broza recording is his 1998 cover of אצלך כמו תמיד on Avodah Ivrit:

Shlomo Artzi has been performing since the 1970's too. Like David Broza, he is still at it. This duet is from Artzi's 2000 album, אהבתיהם:

Ahinoam Nini performs internationally as Noa, often in collaboration with Gil Dor. Here is a live recording of בואי כלה, a Leah Goldberg poem that Noa and Dor put to music and recorded in 1993 on their first studio album:

Last but not least, Idan Raichel and the Idan Raichel Project have received the most airtime since I first discovered Idan Raichel's music ten or twelve years ago. Check out last year's socially-distanced Independence Day concert to see why:

My latest favourite Israeli singer is Etti Ankri, but her biblically-inflected music deserves a post of its own.