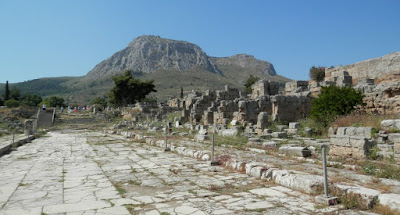 As I mentioned back in October, I will be teaching a 300-level course on Paul's first letter to the Corinthians this semester. In the syllabus, I make a case for studying the letter this way:

Paul’s first letter to the Corinthians is a valuable resource for readers who wish to recover evidence for day-to-day church life in the mid-first-century CE, but the relative abundance of historical data in 1 Corinthians also poses a challenge. Of all Paul’s letters, 1 Corinthians may strike modern readers as the most firmly embedded in an alien historical setting. Reading 1 Corinthians well as a historical document demands more than tracing Paul’s argument; readers must also learn about the archaeology of ancient Corinth, the social and religious beliefs and practices of first-century Jews, Greeks and Romans, and the conventions of ancient rhetoric.

The challenge of reconstructing the letter’s context is matched by the demands of its contents. Paul’s instructions are sometimes challenging because they seem obviously and uncomfortably relevant. They address issues—like church unity, sexual morality and the practice of spiritual gifts—with which the twenty-first-century church continues to struggle. Sometimes they are challenging because the topics, such as head coverings and food sacrificed to idols, seem foreign to contemporary concerns and cultural norms; sometimes they seem equally familiar and foreign at the same time.

Readers who seek to read 1 Corinthians faithfully as Christian Scripture must be alert to the ways in which their own horizons of experience and their own preferences shape and constrain their interpretations. They must also face the hermeneutical challenge of applying what Paul says to their own twenty-first-century contexts. These challenges make 1 Corinthians a fascinating and rewarding subject of study.

In this class we will draw on all the interpretive resources at our disposal to read 1 Corinthians carefully in its historical context, and to consider its implications for contemporary readers.

By the end of this course, students will be able to articulate an understanding of the letter’s purpose, summarize its content, trace its flow of thought, and explain how Paul responds theologically to practical questions. They will be familiar with a range of options in the interpretation of key texts and be able to illustrate how knowledge of the socio-historical context of the letter affects its interpretation. They will also be able to describe hermeneutical challenges posed by the text, and be better prepared to engage it seriously as Christian Scripture.

A copy of the full syllabus is available online here.
Posted by d. miller at 10:38 PM 1 comment: 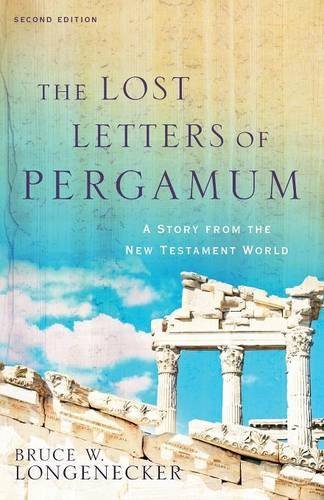 Bruce Longenecker made my job a little easier last semester, by writing a great little book that students enjoy reading. I assigned the second edition of Longenecker's Lost Letters of Pergamum (Baker Academic, 2016) as a textbook for "Introduction to the New Testament," and students loved it.

Perhaps Baker Academic will consider adding these student blurbs to the back of the third edition:

"Really enjoying The Lost Letters of Pergamum book so far!"


A few students apparently neglected to read the preface, which explains that the letters are fictional:


"The Lost Letters I found pretty cool how I'm able to read letters from a very old historical event."

"I am really enjoying Longenecker's book because it includes actual letters of Luke, Antipas, Calpurnius. It gives a glimpse at life in the New Testament times and is extremely interesting."


But how often do you find a textbook that prompts this sort of student response?


"Longenecker is by far my favourite thing I've read this whole semester. I was interested from page one. It's the best."


Based on student feedback I decided to switch out the other two very short introductions I had assigned, but Lost Letters is a keeper - It succeeds in conveying a lot of information about the first-century Roman world, it paints a compelling and attractive picture of early Christian community practices, and--did I mention?--students enjoy reading it.

If I were still maintaining my rather-too-morbid list of Nonagenarian New Testament Scholars, Joseph Fitzmyer would have been on it. He died on December 24, at the age of 96.

I only knew Fitzmyer through his scholarship. I first encountered his classic two-volume Anchor Bible commentary on the Gospel of Luke in grad school. Published in 1981 and 1985 when Fitzmyer was in his 60's, I still regard it as one of the top three or four English-language commentaries on Luke.

I read Fitzmyer's Spiritual Exercises Based on Paul's Epistle to the Romans (Grand Rapids: Eerdmans, 1995), in 2006 as I was preparing to teach Romans for the first time, and found it very helpful. Fitzmyer's major Romans commentary (AB, 1993) created a stir when it came out because the Roman Catholic scholar's exposition of justification by faith sounded so Protestant.

There followed the Anchor Bible commentary on Acts (1998), a disappointment to the seventy-eight-year-old Fitzmyer, who had wanted to publish a major two-volume treatment to match his commentary on Luke, but was forced by the publisher to limit the commentary to a single volume.

I confess that I find Fitzmyer's Acts commentary a bit thin, and I typically turn to other commentaries on Romans first, so I was surprised and delighted when I recently acquired Fitzmyer's 2008 Anchor Yale Bible commentary on First Corinthians and discovered that it is a gem. My initial impression is that it is one of the best recent treatments of the letter--thorough, up-to-date and incisive. I expect to consult it regularly as I prepare to teach 1 Corinthians this semester. As far as I can tell, First Corinthians was Fitzmyer's last major work. Not bad for an 88-year-old.

Perhaps as remarkable as Fitzmyer's longevity and scholarly productivity during the final four decades of his life is the fact that his doctorate was not in New Testament at all. Fitzmyer earned his Ph.D. in Semitics from Brown University in 1956, and made major contributions to scholarship in Aramaic, early Judaism, and the Dead Sea Scrolls.

For more on Fitzmyer's life and work, see the collection of remembrances at America Magazine: "Remembering Joseph Fitzmyer, S.J." as well as this fine tribute by Lawrence Schiffman, delivered in 2001; the wikipedia entry on Fitzmyer is also very good.
Posted by d. miller at 9:19 PM No comments: