Taxonomies of Deity: Do Christians and Muslims worship the same Allah? 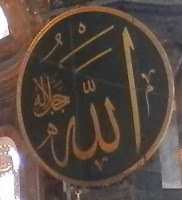 In this post, I will try to explain why for the last 20 years or so I have taken it for granted that--at a level of abstraction required by discussion of religions as a whole--it is correct to say that Christians and Muslims do worship the same God.

(1) Terminology: On Facebook, I wrote: "Do Christians and Muslims worship the same Allah? Of course they do. If this conversation were being conducted in Arabic, there would be no debate." The point of this provocative over-simplification--aside from registering my astonishment--was to observe that the two different names (Allah, God) may lead English-speakers to assume that the names refer to two different deities. I suspect this is what has happened on a popular level in North America. Ignorance and post-9/11 political realities, more than anything else, are why many evangelicals assume that Christians and Muslims worship different gods. But Allah, in Arabic, is the generic name for God. It was used by Christians before Islam began, it appears as the name for God in standard Arabic translations of the Bible, and it is still used by Arabic-speaking Christians today. If, as I will argue, it is correct to say that, despite their fundamental differences in theology, Christians and Muslims worship the same God, it is also true that they worship the same Allah.

(2) Similarities: Muslims and Christians agree that there is one God, and both Christians and Muslims describe the one God in many of the same ways: God, according to the Qur'an, is the creator, "the Mighty one, the All-knowing" (6.96); God is "the Lord of the Universe, the Compassionate, the Merciful" (1.2-3); God alone is "the Forgiving One" (15.49), etc. Muslim theology presents Islam as the correct continuation of God's revelation to Abraham, Jesus and the biblical prophets. As a result, when Muslims and Christians talk about God, they share a common starting point in a way that a Christian and a Hindu devotee of Krishna do not.

(3) Differences: To be sure, there are also significant differences. Built into Islam is a rejection of the deity of Jesus. From a Muslim perspective, Christians have fallen away from the true religion into tri-theism. For their part, Christians insist that any conception of God's oneness that denies God's self-revelation in Jesus is fundamentally distorted. These different conceptions of God must not be minimized. I would happily sign off on Wheaton's College's "Statement Regarding Christian Engagement with Muslim Neighbors":


While Islam and Christianity are both monotheistic, we believe there are fundamental differences between the two faiths, including what they teach about God’s revelation to humanity, the nature of God, the path to salvation, and the life of prayer.


(4) Different Conceptions vs. Different Gods: Nevertheless, the fact that Christians and Muslims have different ideas about the nature of God does not mean that they worship different gods. In this context, "different conceptions" is a meaningful statement; "different gods" is not:


Because, according to the classical theist, there can only in principle be one God, Christians, Jews, and Muslims who embrace classical theism must be worshipping the same God. It simply cannot be otherwise.

Instead of denying or minimizing the broad overlap in Christian and Muslim views about God, it is far better, in my view, to follow the example of Jesus in John 4, and Paul in Acts 17, and say "What you worship as unknown (or, in this case, partially known) I proclaim to you" (Acts 17:23; cf. John 4:22).

If you are interested in further reading on the subject, I recommend the following short articles written by Christians with years of experience working with Muslims: