I wish to report that, despite the load I carried back with me in my carry-on luggage, I am still "on the wagon", more or less:


As I wandered the bookstalls deciding what not to purchase, and sat in 2.5 hour book review sessions, I also considered how I want my book-buying and reading habits to change over the long term once this year is through. Some initial thoughts:

"But Faith, like a jackal, feeds among the tombs, and even from these dead doubts she gathers her most vital hope." - Herman Melville, Moby Dick.
Posted by d. miller at 9:02 AM No comments:

"Everything is not okay, people" announced the street-preacher through a megaphone at the corner of Decatur and Canal Street. I had to smile. Many of the well-dressed academics jay-walking between the New Orleans Marriott and Sheraton were Christians. No doubt some on this Friday afternoon were themselves of the "evangelical" persuasion, and were making the transition between the ETS meetings that had just concluded and the IBR meetings that were about to begin.

But everything is not okay, people: Where else but at SBL and its affiliated societies, is the study of Christianity's sacred text combined so thoroughly with pride, envy, greed, and rank ambition--to the point where we can no longer tell the difference between soli deo gloria and self-promotion?

This, of course, is a distortion of the ideal, which for the SBL is "to foster biblical scholarship." In theory, we connect with other scholars and put our best work forward in academic publications and conference presentations not to make a name for ourselves or get noticed, but to serve the discipline, hone our craft, improve our teaching--in short, to honour our subject. For Christian scholars of everything from biology to biblical studies, careful disciplined study of God's world is, finally, a way of serving its creator.

But the temptations are real, a distorted "rat race" mentality all too common. I remind myself of them here because they are temptations to which I am prone. Κύριε ἐλέησον.
__________________
P.S. One of my roommates bought the street preacher lunch at Arby's. I walked by on the other side.
Posted by d. miller at 1:55 PM 3 comments:

I'm heading down to the "Big Easy" tomorrow morning, and I confess I'm concerned about falling off the wagon. So far this year, I've been pretty good at sticking to my new year's resolution, but I always knew the hardest test would come in New Orleans . . . at the Society of Biblical Literature's massive book display: How can you resist row on row of book displays featuring the major publishers in Biblical Studies, with discounts at 40-50% (or more)?

Since I know I am going to purchase books again next year it is easy to rationalize starting now, when the prices are good. But then I glance at all the books on my shelf from previous years that I still haven't read, and renew my resolve. Still, it can't hurt to browse a little...

My other concern is finishing my paper: The way things are going, I may spend Friday afternoon and all day Saturday confined to my hotel room working away on Sunday morning's presentation.
Posted by d. miller at 8:03 PM No comments: 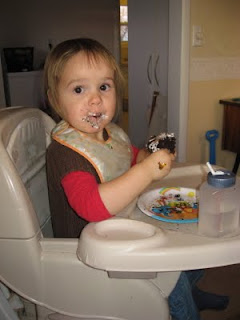 (For the sake of comparison, consider last year's photo.) 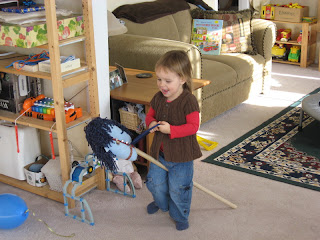 (At first she thought it was a mop.)

In other news, some folks came by a few weeks ago and drove off with our wind-damaged garage: 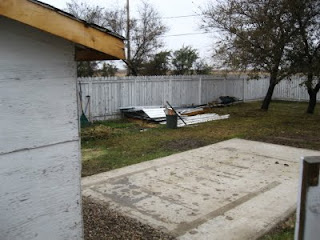 The new, improved, and larger version is coming along nicely: 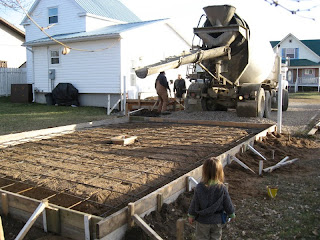 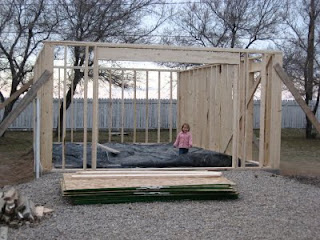 "Any effort that has self-glorification as its final endpoint is bound to end in disaster. . . . When you try to climb a mountain to prove how big you are, you almost never make it. And even if you do it's a hollow victory. In order to sustain the victory you have to prove yourself again and again in some other way, and again and again and again, driven forever to fill a false image, haunted by the fear that the image is not true and someone will find out. That's never the way" (189).

"Mountains should be climbed with as little effort as possible and without desire. The reality of your own nature should determine the speed. If you become restless, speed up. If you become winded, slow down. You climb the mountain in an equilibrium between restlessness and exhaustion. Then, when you're no longer thinking ahead, each footstep isn't just a means to an end but a unique event in itself. This leaf has jagged edges. This rock looks loose. From this place the snow is less visible, even though closer. These are things you should notice anyway. To live only for some future goal is shallow. It's the sides of the mountain which sustain life, not the top. Here's where things grow. But of course, without the top you can't have any sides. It's the top that defines the sides" (183).

Robert M. Pirsig, Zen And The Art Of Motorcycle Maintenance

Tomorrow afternoon at 12:30 p.m. (in S113) I will be presenting a paper on Josephus's interpretation of Deuteronomy 18 as part of Briercrest's Bible and Theology Colloquium series.

A week from Sunday (Nov 22) I will present a revised version to SBL's Josephus group in New Orleans. Here is an abstract:


In his summary of the Mosaic constitution (A.J. 4.196-302), Josephus omits Deuteronomy's legislation about prophets, but inserts an enigmatic reference to a “prophet” in his paraphrase of Deut 17:8-13. The “prophet” who, according to A.J. 4.218, participates in the Jerusalem high court along with the high priest and gerousia, has been variously regarded as another term for the high priest, or as representing the scribes or the Pharisees. This paper builds on Sarah Pearce’s argument that the “prophet” is to be understood in the first place as Joshua, and that the passage presents this system of government as an ideal. A review of the use of “prophet” (προφήτης) in Josephus demonstrates that the historian consistently distinguished prophets such as Joshua from priests and kings; it also suggests that Josephus understood Deuteronomy 18 as a prediction of a succession of prophets, and, finally, that he intended A.J. 4.218 as a summary of Deuteronomy 18:15-22 as well as 17:8-13.

If you can make it out (in either location), I'll be glad for your feedback.
Posted by d. miller at 11:29 AM No comments:

Is it true that Deuteronomy 18 is the only passage in the Pentateuch that speaks abstractly about a successor to Moses?
What am I missing?
Posted by d. miller at 12:08 PM No comments:

Email ThisBlogThis!Share to TwitterShare to FacebookShare to Pinterest
Labels: Teaching

One of my seminary mentors, the late Don Verseput, observed how many students come to college or seminary wanting to be youth pastors under the influence of their own youth pastors, and leave wanting to be teachers, under the influence of their college or seminary professors. Something is wrong, Verseput suggested, if Christian college and seminary professors groom their best students to be scholars like them. The result may be flattering, but it is also misdirected: The job of a pastor may not be as high status, and it does not require as much education, but from the perspective of the church, it is more important, more valuable, more urgent.

I was reminded of Verseput's comments a few weeks ago when I read Justin Taylor's account of John Piper's transition from college professor to pastor. This excerpt is from a sermon Piper preached as a pastoral candidate:

Right now in my own life, I stand on the brink of a professional change. I really love my job at Bethel College. It is very rewarding. When I see students out there who are in my 1 Corinthians class, it makes me very glad. One of the ways God has said to me “Move Piper,” is this: when I read Philippians 1:19-26, there is in me a tremendous longing. Last October it became an irresistible longing to be an instrument in God’s hands to fulfill these goals in a local church. At this point in my life I say, and I believe God is saying to me, “The potential, Piper, for magnifying me is greater now in the pastorate than in the professorship.”

We don't just need more pastors, we need pastor-scholars. According to Kevin Vanhoozer,

"Seminary faculties need the courage to be evangelically Protestant for the sake of forming theological interpreters of Scripture able to preach and minister the word. The preacher is a “man on a wire,” whose sermons must walk the tightrope between Scripture and the contemporary situation. I believe that we should preparing our best students for this gospel ministry. The pastor-theologian, I submit, should be evangelicalism’s default public intellectual, with preaching the preferred public mode of theological interpretation of Scripture." (HT: Mike Bird)

The point of my job, I remind myself from time to time, is not to encourage my students to imitate my career choices, but to help prepare them to do something more important with their lives.
Posted by d. miller at 12:33 PM 1 comment:

Email ThisBlogThis!Share to TwitterShare to FacebookShare to Pinterest
Labels: Teaching

The Epistemology of the Natural

"The epistemology of the natural opens a space for the discourse of power/knowledge."

The above sentence comes to you courtesy of the University of Chicago Writing Program's "Make Your Own Academic Sentence" creator. Visit The Virtual Academic yourself, "and let Professor Pootwattle design an academic sentence just for you."

...I could use a "Make Your Own Academic Paper" creator right about now.
Posted by d. miller at 11:19 AM No comments: