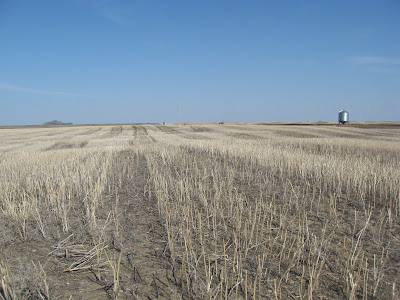 One of the things I like most about גֵּר־וְתוֹשָׁב as a blog name is that it gets at my experience as a child of missionary parents: In a small way I know what it means to be "an alien and a stranger." Before graduating from high school, I lived in a dozen or so different places in Ethiopia, Kenya, the USA and Canada. I have always found it hard to say where I am from.

In a surprising twist I now live not far from the land along the South Saskatchewan River that my great-grandfather homesteaded in 1905. My grandfather farmed the same property until his retirement, at the age of 72, in 1962. He sold the farm shortly before his only son departed for Africa. I never saw the place.

This afternoon we drove out to see the homestead with my daughter and visiting parents. We stopped first at the old farmhouse which was sold and moved a few miles down the road in 1973: 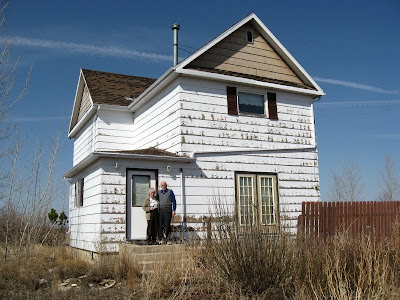 The house had obviously been kept up well...until it was sealed and abandoned several years ago: 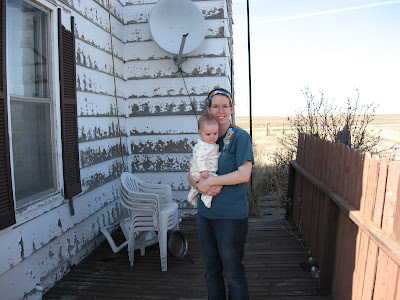 Next, we stopped at the site of my dad's old one-room school house: 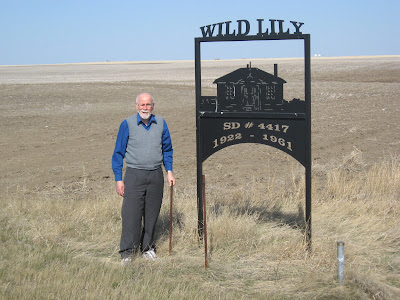 We eventually located the homestead too, though there is nothing to show for the barn, the shed, the trees my grandfather planted, and the carefully tended yard, except a ploughed field and my dad resting his cane on the soil saying "This is where I was born." 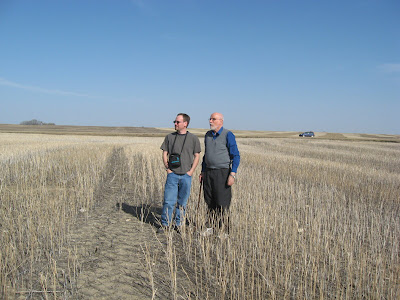 Craig Bartholemew gave a paper earlier this year at one of our Bible-Theology colloquiums on "The Theology of Place in the Gospels." Craig was speaking out of the Christian Reformed tradition and, I suspect, reacting (rightly) to evangelical neglect of this world in anticipation of the next. Still, I think there is more to be said for a Christian theology of exile. To be sure, we are to "build houses and live in them, plant gardens and eat their fruit" (Jer 29:5), but we remain aliens and strangers.
Posted by d. miller at 12:10 AM 2 comments:

"[T]hat epithet would not have described her to circles in whose more precise vocabulary cleverness implies mere aptitude for knowing and doing, apart from character....She did not want to deck herself with knowledge - to wear it loose from the nerves and blood that fed her action; and if she had written a book she must have done it as Saint Theresa did, under the command of an authority that constrained her conscience." - George Eliot, Middlemarch (Penguin Classics), 86.

...There are a couple substantive posts in the works, but they must wait until marking is done.
Posted by d. miller at 1:45 PM No comments:

Email ThisBlogThis!Share to TwitterShare to FacebookShare to Pinterest
Labels: Middlemarch

"Sundays" are for Volf - Chapter 7: Violence and Peace

My thesis that the practice of nonviolence requires a belief in divine vengeance will be unpopular with many Christians, especially theologians in the West. To the person who is inclined to dismiss it, I suggest imagining that you are delivering a lecture in a war zone....Among your listeners are people whose cities and villages have been first plundered, then burned and leveled to the ground, whose daughters and sisters have been raped, whose fathers and brothers have had their throats slit. The topic of the lecture: a Christian attitude toward violence. The thesis: we should not retaliate since God is perfect noncoercive love. Soon you would discover that it takes the quiet of a suburban home for the birth of the thesis that human nonviolence corresponds to God's refusal to judge. In a scorched land, soaked in the blood of the innocent [take Darfur, for instance], it will invariably die. And as one watches it die, one will do well to reflect about many other pleasant captivities of the liberal mind. (Exclusion and Embrace, 304)

And that's it for the book and this blog series. To quote my colleague, Don Taylor, who began the book well after I did, and finished before me: "That's one of the best books I've read in a lot of years."

Email ThisBlogThis!Share to TwitterShare to FacebookShare to Pinterest
Labels: Volf

The "end" of another semester!

Well, not quite the end: I still have a pile of marking to do and, contrary to popular belief, academics do not commence vacation when classes stop. After grades are in, I have syllabi to prepare for the fall, a paper to write for a conference at the beginning of June, an article that I am supposed to complete this fall, and two or three new courses to get ready for the next school year. Did I mention the book that didn't get written on my sabbatical?

Still, God has been faithful through a busy semester, and it is nice to have a change of pace.
Posted by d. miller at 12:20 AM No comments:

Ulrich Wilckens on the Role of the OT in NT Theology

Here's another quote from Christoph Stenschke's review of Ulrich Wilcken's NT Theology because I can't get it out of my head:

I suspect Wilckens expects his readers to notice the contrast with an earlier German NT theologian--Rudolf Bultmann:

To the Christian faith the Old Testament is no longer revelation as it has been, and still is, for the Jews. For the person who stands within the Church the history of Israel is a closed chapter. . . . Israel's history is not our history, and in so far as God has shown his grace in that history, such grace is not meant for us. . . . The events which meant something for Israel, which were God's word, mean nothing more to us. . . . To the Christian faith the Old Testament is not in the true sense God's Word. (Bultmann, "The Significance of the Old Testament for Christian Faith," as quoted in Richard Hays, Echoes of Scripture in the Letters of Paul [Yale, 1989], 7-8)

"Sundays" are for Volf - Chapter 6: Deception and Truth

Once classes began this semester, my desire to post something intelligent on each chapter of Exclusion and Embrace slowed down my reading. So I'll content myself with a couple brief quotations from Volf's excellent penultimate chapter on a chastened epistemology:

"The argument that there is a single truth about some important matters and that one should strive to find it should be plausible to Christians. After all, do we not believe that the day will come when the secrets of the hearts will be revealed and when God will say out loud the way things really were--who did what to whom and by what means?...Trying is not the same as succeeding, however. Though God knows the way things were and will one day say it out aloud, human beings know only partially and can say it only inadequately. There is now way to climb up to God's judgment seat to make infallible pronouncements, so to speak, in God's stead as God's vicars on earth" (242-3).

"To be a witness means to strive to do the self-effacing and noncreative work of--telling the truth. That does not mean that a witness will have to situate herself 'nowhere' and in sublime disinterestedness make perspectiveless pronouncements about what everyone and anyone must have seen or heard. No, standing at one place or another she will tell in her own words what she has seen or heard. But though a good witness cannot and need not abstract from her particular situatedness, she will seek to renounce the clandestine imperialism of her own self-enclosed self which refuses to make space for the other as other in its cognition. That a witness will rarely fully succeed and sometimes not even try, goes without saying. Hence we keep suspicion close at hand even when listening to those whom we take to be good witnesses. But neither our suspicion nor witnesses' frequent failure alters the obligation and the ability of the witness to respect the otherness of the other--by seeking to tell the truth" (268).
Posted by d. miller at 7:55 PM No comments:

Email ThisBlogThis!Share to TwitterShare to FacebookShare to Pinterest
Labels: Volf

"It seems to me that solitary study tends to seek meaning, while study be-havruta (in fellowship) tends to look for implications. When we read by ourselves, and we are satisfied that we have understood, we naturally move on. But when 'learning' is a kind of conversation, then there is always more to be said. The rate of progress is more leisurely, the depth of analysis more penetrating. The modern way of 'study' and traditional Jewish 'learning' are more different, and are different in more ways, than might at first seem the case."

Doug Chaplin is "Blogger of the Month" over at Biblioblogs.com. Here's a snippet from the interview that describes my own experience all too well:

One of the problems that has continued to dog my spiritual life is that while intellectually I have no problems integrating critical study of the Bible with a doctrinal view of it as scripture, in practice I do find I’m much more likely to wander off on a critical question than actually try to hear what God might have to say. Though it’s surprising how often God can be there in the answering of a critical question, waiting to ambush you. But I’ve stayed passionate about insisting that mind and heart ought not to be divorced.

The whole interview is worth reading. You might even decide to subscribe to Doug's blog as I did when I was done.
Posted by d. miller at 10:45 AM No comments: