Could ancient Jews eat with Gentiles without violating the law?


Could ancient Jews eat with Gentiles without violating the law?

It is safe to say that most readers of the New Testament (and many New Testament scholars) assume the answer is no. After all, (1) in Acts, when Peter returns from visiting Cornelius he is criticized for staying with uncircumcized men and "eating with them" (Acts 11:3). (2) In Galatians, Paul equates eating with Gentiles to living "like a Gentile (ethnikôs) and not like a Jew (ioudaikôs)" (Gal 2:12-14). These two passages seem parallel. (3) Since Peter responds to his critics by telling a story about clean and unclean food that concludes with the declaration, “what God has cleansed, do not regard as defiled” (11:9), readers of Acts routinely conclude that, from Luke's perspective at least, accepting Gentiles into the church meant doing away with the food laws.

I am not so sure. For one thing, Luke never explicitly draws the conclusion from Peter's vision or his encounter with Cornelius that the food laws were set aside. To the contrary, in the latter chapters of Acts Paul insists on his own continued fidelity to the Jewish way of life: Paul participates in temple worship to show that he “guards the law” (21:24); he also denies that he has done anything against the law (25:8) or his people’s ancestral customs (28:17).

Outside the New Testament, passages that emphasize the strictness with which some Jews observed the food laws also demonstrate that it was possible to "keep Kosher" in Gentile contexts: (1) Daniel and friends refuse the king's food and wine, requesting a diet of vegetables and water, but it was still the king's vegetables and water that they ate (Dan 1:8, 12). (2) Josephus describes a group of priests imprisoned in Rome who survived on a diet of figs and almonds out of piety toward God (Life 14). Martin Goodman concludes: "For pious Jews to eat with non-Jews, sharing a convivial table, was possible, but difficult" (Rome and Jerusalem 119).

Moreover, the food laws were interpreted differently by different Jews:


"It is important to remember that--notwithstanding many wide areas of absolute conformity--evolving Jewish law, even within the normative Orthodox wing alone, has never been monolithic. As a result, it is usual for all popular guides to the practice of kashruth (including cookbooks) to contain strong disclaimers and exhortations to the reader to consult local competent rabbinic authority at all times." - Gene Schram, "Meal customs (Jewish)" Anchor Bible Dictionary 4.649.

If this is true for Orthodox Judaism today, how much more may we suppose that there was room for variety in the first century?

E.P. Sanders explains that in addition to the avoidance of pork, food sacrificed to idols and food containing blood posed "potential problems" for observant Jews. "There are possible problems with other foods, especially the main liquids, oil and wine. A libation to a pagan deity might have been offered from wine before it was sold; oil also might have an idolatrous connection." Aside from these restrictions, Gentile food could be fair game, although "some Jews were generally unwilling to eat pagan food, even when there might be no legal objection to it." On the other hand, Sanders suggests that Paul was not the only first-century Jew who advised eating whatever was set before them without asking questions of conscience: "In 1 Cor. 10.27, Paul advises Christians not to ask about the source of food when in someone else's house, and it is most likely that in the Diaspora some Jewish families followed the same practice" (E.P. Sanders, Judaism: Practice and Belief: 63 BCE – 66 CE. [Philadelphia: Trinity Press International, 1992], 216).

To this evidence, we may add a passage from the Mishnah about Gentile wine and its use in idolatrous libations, which takes for granted that Jews could in some contexts eat with Gentiles:

However we understand NT passages such as Acts 10-11 and Galatians 2, we need to set aside once and for all the idea that Jews believed eating with Gentiles meant violating the law. That simplistic assumption rests on a failure to engage early Jewish sources--and a failure of historical imagination.
Posted by d. miller at 2:09 PM No comments: 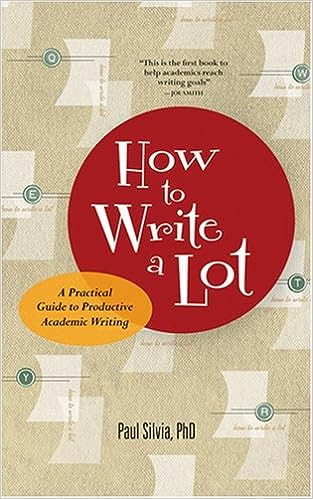 In retrospect, it might have been more helpful for me to read Paul J. Silvia's How to Write a Lot before my sabbatical instead of just after it has ended, but I am excited about applying his recommendations to my regular teaching life now that a new school year is about to begin.

Silvia's basic idea is to schedule time for distraction-free writing each week (he recommends starting with 4 hours), maintain the schedule religiously, set goals, and track your progress. Writing time may include research. If you do this, Silvia promises, you will write a lot.

Rather than expanding on the method--I'm sure Silvia would rather you purchased your own copy--I quote from the salutory reminder in the book's conclusion:


"Writing isn't a race. Don't publish a paper just for the sake of having one more published paper. Don't count your publications. Be proud of the euthanized manuscripts--papers that could be published somewhere but shouldn't be published anywhere--lurking in your file cabinet. If you find yourself counting notches on your academic bedpost, spend a writing period thinking about your motives and goals" (131).


On a related note, Seumus MacDonald is right that the academic guild is susceptible to ancient Roman cultural norms:


It’s blindingly obvious that Academia runs as a microcosmic honour/shame society because the one thing that ranks just below actual scholarship in scholars’ concern is prestige or honour as accorded them by their peers. This is what drives almost all academic endeavours (beyond the actual desire to study): conference papers, journal and monograph publishing, etc.. Every act of publishing is an attempt to gain the symbolic capital of prestige among academic peers, via an act of heroism, which is the public display of scholarly prowess.

If you are looking to fill a history elective at Briercrest College this fall, may I recommend HIS312: Ideas and Society in Early Modern Europe? Like the history course I recommended last year--which turned out very well, by the way--I can't help but be a tiny bit biased, but I have read the syllabus and talked a lot with the professor about things Early Modern over the past several months, and I think it will be a great course. Curent Briercrest students can check out the syllabus on Briercrest Live; everyone else can find it here (scroll down to the bottom of the page).

For bonus marks, identify Erasmus and Thomas More in the painting, and explain the significance of the colours.

Nine years ago, as I prepared to teach Paul's letter to the Romans for the first time, I recorded the Greek text so that I could listen to it on the weekly commute I was doing that year to and from Saskatoon. I found I could make it through the entire letter on the two and a half hour drive, and the experience of listening to the whole thing more-or-less each week did a lot to give me a sense for thematic connections within the letter, as well as the flow of thought in the letter as a whole. But the quality of the recording (and of my newly-adopted Reconstructed Koine pronunciation) was so bad that I could not in good conscience share it with anyone else.

I recently finished recording Romans again, and this time I am not as embarrassed by the result. As far as I know, it is the only recording of the Greek text of Romans that uses the "Reconstructed" or "Imperial" Koine pronunciation system that most closely approximates how Greek was spoken in the first century.


"Students are free to add aspiration as they wish, though one may imagine that such would have been thought stuffy or snobbish in the first century. There may still have been some features of a classical Greek that were consciously learned by the upper classes and in which [h] would be learned and heard." (Buth, footnote 24)

My current practice, reflected in these recordings, is to omit the rough breathing when it sounds particularly odd, is difficult to pronounce, or makes little difference in sound (e.g., οἷς, ὁμοθυμαδόν); but to retain it in other instances because the 'h' sound frequently distinguishes between two different forms that would otherwise sound alike.

You can listen to individual chapters below or download all the files here (wav) or here (mp3).

These Romans in Reconstructed Koine recordings by David M. Miller are licensed under a Creative Commons Attribution-NonCommercial-NoDerivatives 4.0 International License. This means you are welcome to download, copy and use the recordings with attribution, but you may not modify them without my permission, or sell them.
Posted by d. miller at 3:07 PM 4 comments: