As I was completing the final section of my article (very rough) draft last night, I returned to some remarks I gave at Briercrest's faculty retreat last fall--and I thought they were worth posting here:
________________________________________________________________________________
On the surface, the hot topic in Biblical Studies that I am trying to describe, evaluate and contribute to comes down to the question, Should the Greek word, Ioudaios, be translated ‘Jew’ or ‘Judaean’? This appears to be the kind of hair-splitting about minutiae that typifies scholarship at its “best” (like an academic conference on The Finer Points of Sausage Dogs). But if you are studying ancient ‘Judaism’ the question has a certain urgency to it because you have to call Jesus’ contemporaries something, and you don’t want to embarrass yourself by using a discredited label. The scholars themselves would protest that the debate is much more important than terminology. According to Philip Esler,


[T]ranslating Ἰουδαῖοι [Ioudaioi] as ‘Jews’ is not only intellectually indefensible . . . but also morally questionable. To honor the memory of these first-century people it is necessary to call them by a name that accords with their own sense of identity. (Esler 2003: 68).

By contrast, Amy-Jill Levine claims that switching from ‘Jew’ to ‘Judaean’ will do more harm than good:


The Jew is replaced with the Judean, and thus we have a …a text purified of Jews. Complementing this erasure, scholars then proclaim that Jesus is neither Jew nor even Judean, but Galilean. . . . Once Jesus is not a Jew or a Judean, but a Galilean, it is also an easy step to make him an Aryan. So much for the elimination of anti-Semitism by means of changing vocabulary (Levine 2006: 160, 165).

The reference to anti-Semitism points to a deeper issue. Last week I had my Gospels students brainstorm answers to the questions: Why did Jesus die? What is the significance of his life? What is the connection between the two? When I asked, “humanly speaking, what got Jesus killed?”, the Pharisees kept coming up: They were jealous. They were bad. I was doing my best to smile and nod. Now I wish I had recorded the answers because I can’t remember whether the student who said that Jesus was sent to earth to show how “they” were wrong was speaking about the Pharisees or “the Jews”. But one gets the impression that they amount to the same thing. And who can blame them?


For you, brothers, became imitators of the churches of God in Christ Jesus that are in Judea. For you suffered the same things from your own countrymen as they did from the Jews, who killed both the Lord Jesus and the prophets, and drove us out, and displease God and oppose all mankind …But wrath has come upon them at last! (1 Thess 2.14-16)

These passages trouble me not* because I think the New Testament is anti-Semitic, but because of the role they have played in the tragic history of Christian anti-Semitism: Gentle St. Bernard of Clairvaux calling the Jews “a race who had not God for their father, but were of the devil” (source); Martin Luther who—if Wikipedia is to be believed—wrote, “"[w]e are at fault in not slaying them” ; Easter pogroms against the Jews in 19th century Europe, the holocaust, and my memory from junior high school of someone telling a Jewish classmate, “you killed Jesus.”

This is one place where the translation question comes in. According to the NET, Jesus is talking with “Judeans” not “Jews” when he says “your father” is “the devil” (John 8:31). In the NLT, where the truth is “made clear,” the Jews disappear altogether and are replaced with the benign “people.” The NLT and NET are following the advice of the standard lexicon of New Testament Greek, which says:


Incalculable harm has been caused by simply glossing Ἰουδαῖος with ‘Jew’, for many readers or auditors of Bible translations do not practice the historical judgment necessary to distinguish between circumstances and events of an ancient time and contemporary ethnic-religious-social realities, with the result that anti-Judaism in the modern sense of the term is needlessly fostered through biblical texts.

I am with Amy-Jill Levine on this one: Leaving “Jews” out of our translations may make unsuspecting readings think Jesus was not a “Jew,” and deny to contemporary “Jews” their ancient heritage. I am also not convinced that the best way to atone for a troubling past is to sweep the issue under the carpet.

Herding Cats and the Meaning of Ioudaios

"Determining the meaning of Ioudaios [Jew/Judaean] is a lot like ‘herding cats or participating in a greased pig contest.’"* So goes the first sentence of the conclusion to my final article on the meaning of Ioudaios. I still need to figure out what I will say in the rest of the conclusion, draft an appendix on how the term should be translated, and revise the whole thing. Meanwhile I leave you with this:

*The 'herding cats' quote is borrowed from George Nickelsburg's description of scholarship on Joseph and Aseneth in Jewish Literature Between the Bible and the Mishnah (2nd ed.; Minneapolis: Fortress Press, 2005), 337.
Posted by d. miller at 1:50 PM No comments:

Update (18 July): It turns out that OneNote already does what I wanted VUE and Freeplane to do. Oops. Back to my FreePlane & OneNote combination; still waiting for Scapple...

In my last post I said that I had settled on Freeplane as a stop-gap measure until Scapple becomes available for Windows. This afternoon I switched to VUE because Freeplane is just not up to the job.

Like Freeplane, VUE is a free open-source program, but it is geared toward concept mapping instead of mind-mapping (see here and here for a comparison). I might care about the difference eventually, but right now I am looking for something that neither program was designed for, but that VUE allows me to do: to type text anywhere on a limitless canvas and then move the bits and pieces around as I puzzle out the order in which my thoughts should go together. Freeplane supports multiple nodes, but it doesn't let you move them around; VUE supports text boxes that you can move around. The export options in VUE aren't great, but it does the job for now. Here is what I was working on this afternoon: 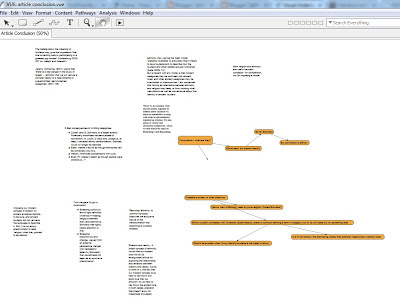 Samir Kurdi had this to say about an earlier version of VUE:

VUE offers a good balance between complexity and ease of use, and between offering the simple building blocks needed to create mind maps of all kinds, on the one hand, and sophisticated tagging, analytical, and presentation tools on the other.

Now back to the job that VUE is supposed to be helping me complete!
Posted by d. miller at 8:07 PM No comments:

I had a productivity software episode a couple weeks ago, brought on by disappointment that Scapple is not available for Windows (yet). You see, I draft most everything I write--including this blog post--on scrap paper before entering it on the dreadfully blank, linear, and permanently ephemeral screen. As my thoughts don't come out in sequence, and I'm always afraid I'll lose something important, I end up brainstorming all over the page (like this).

Among the several disadvantages of this pack rat writing style are that I write slowly, my internal hamster tends to fall off its wheel when I run out of room on the page, and I eventually have to enter the bits and pieces worth saving into permanent storage on my computer. (I also go through a lot of scrap paper. I once accidentally printed 400 pp. from a colleague's book manuscript, which kept me supplied for a while. Since that stock ran out, I've taken to dumpster diving recycle bins around the school.)

Sometimes fountain pen and paper aren't good enough. Sometimes I want to keep my random thoughts in the more-or-less random form in which they emerge. I also wondered about saving time by brainstorming on screen rather than on paper. Enter Scapple: 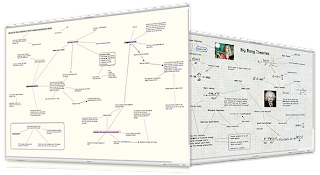 "Scapple is an easy-to-use tool for getting ideas down as quickly as possible and making connections between them. It isn’t exactly mind-mapping software—it’s more like a freeform text editor that allows you to make notes anywhere on the page and to connect them using straight dotted lines or arrows. If you’ve ever scribbled down ideas all over a piece of paper and drawn lines between related thoughts, then you already know what Scapple does."

Alas, Scapple is not currently available for Windows, so I looked around for alternatives. The short answer is that there are none. After reading about Blumind, TheBrain, and connectedtext, and trying xmind, Freemind, Coggle, CompendiumNG, I settled on Freeplane as a workable stop-gap with VUE as a runner-up [Update: I've switched to VUE; see below]: 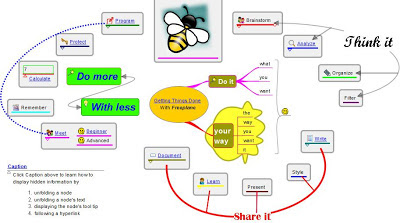 Freeplane is a free, open source, powerful mind-mapping program that allows you--somewhat awkwardly--to click and type in different areas of the "page" (which, as far as I can tell, is limitless). [Update: Freeplane doesn't really work for unconnected notes because, as far as I can tell, you can't move text around freely. If you are stuck with Windows and it is a free-form text editor you are looking for, try VUE. (See this post for more detail.)] If  Perhaps because it is a mind-mapping program geared toward brainstorming related thoughts, it has not eliminated my perpetual need for scrap paper when I am working on a writing project, but I have begun to use it to store stray thoughts, and it works quite well for that purpose. One neat feature, which sets it apart from Vue, is that you can copy your mind-map and paste it into OneNote as an outline.