Some interesting thoughts (by a blogger) about why young students and scholars should avoid blogging:

Academic Blogging: Some Reservations and Lessons

It's good advice for those who do blog too. In its immediacy, blogging can inhibit reflection.

Since I am obviously not following Blum's advice to avoid blogging altogether, I may as well mention that (1) Blum doesn't address the public service aspect of scholarship and (2) while I agree that peer review is important,  I am more inclined to put whatever "new" ideas I have out there because I think that there is something fundamentally broken about the way the academic publishing system works (more on this, hopefully, another time). Or maybe it's because I see myself as a גֵּר־וְתוֹשָׁב.

Here is another perspective mentioned in the comments to Blum's post: The Common School.
Posted by d. miller at 9:34 AM 2 comments:

The quotation demands a hearing precisely because Bonhoeffer was no supporter of the status quo. It reflects Bonhoeffer's experience running an underground seminary--actually an experiment in communal living--during the years leading up to World War II.
Posted by d. miller at 11:03 PM No comments:

The Meaning of Ioudaios in Ancient Judaism

Since it began as a series of posts on this blog--and since publishing events are still rare enough in my case--I thought I'd mention that my article, "The Meaning of Ioudaios and its Relationship to Other Group Labels in Ancient 'Judaism'" Currents in Biblical Research 9.1 (October 2010): 98-126 has now been published.

SAGE is offering free access to its journals until October 15, so if you'd like to peruse a free electronic copy, now is your chance. Click on this link for instructions.

I originally pitched the article as a revision and expansion of my December 2007 "What's in a Name?" blog series on the meaning and translation of the Greek term Ioudaios (normally translated 'Jew' or 'Judaean'). What emerged was something of a prequel. Here is the abstract:


This article, the first in a two-part series, describes and critically evaluates major contributions in the last seventy years of scholarship on the relationship between Ioudaios (‘Jew’ or ‘Judaean’) and other group labels. The first section examines the common suggestion that Ioudaios was an outsider label, and ‘Israel’ an insider label. The second section surveys explanations of the relationship between Ioudaios and other terms such as ‘Galilaean’, ‘Idumaean’ and ‘Ituraean’, evaluating them in light of the evidence from Josephus. The conclusion sketches the decline of religion and rise of ethnicity as interpretive categories in scholarship on Ioudaios, and raises questions about the meaning of the term that require further discussion. The second article in this series will analyse the use of religion and ethnicity in scholarship on the meaning of Ioudaios, and evaluate the debate over the term’s English translation.

My conclusions run counter to the positions of Richard Horsley and John H. Elliott, in particular:


(1) Elliott (2007: 153) has recently argued that since ancient Jews normally referred to themselves as ‘Israelites’ not Ioudaioi, modern scholarship should follow suit, adopting ‘Israelite’ as the normal scholarly designation for Jesus and his Second Temple ‘Israelite’ contemporaries. (2) Horsley (1995: 13) argues that since Ioudaios was closely associated with the region of Judaea and typically opposed to ‘Galilaean’, it should be translated as ‘Judaean’ rather than ‘Jew’. I will argue against Elliott that Ioudaios, like ‘Israelite’, was in use as an insider self-designation, and against Horsley that Josephus, at least, regarded Galilaeans as Ioudaioi. (100)

Part 2, which will interact more directly with the work of Shaye Cohen, Philip Esler, Steve Mason and others, is still in production, but you can get a sense for what I expect to say here.
Posted by d. miller at 10:54 AM 2 comments:

I was reading Mark 14 this morning and noticed that the standard Greek editions (NA27 and UBS4) do not punctuate Jesus' final comment about the disciples' sleep with a question, as the translations I grew up with do.

According to the NIV, NRSV, NET, ESV, NKJV, and NASB, Jesus returns the third time and asks a variation on the question he addressed to Peter in verse 37: "Are you still sleeping and resting? Enough! The hour has come. Look, the Son of Man is betrayed into the hands of sinners." (NIV)

The sentence could also be a command, however, since in Greek 2nd person plural indicative and imperative verb forms are identical, and the original text would not have indicated the difference between a question and a command by punctuation. A (sarcastic) command fits the context well. This was the interpretation that the KJV adopted, and that the NLT returns to:


And he cometh the third time, and saith unto them, Sleep on now, and take your rest: it is enough, the hour is come; behold, the Son of man is betrayed into the hands of sinners. (KJV)

When he returned to them the third time, he said, "Go ahead and sleep. Have your rest. But no -- the time has come. The Son of Man is betrayed into the hands of sinners. (NLT)

He came back a third time and said to them, 'You can sleep on now and have your rest. It is all over. The hour has come. Now the Son of man is to be betrayed into the hands of sinners. (NJB)

On this interpretation, the disciples have missed their chance to watch and pray; they may as well sleep. It fits the context and is consistent with Mark's portrayal of Jesus. What do you think?
Posted by d. miller at 10:08 AM 4 comments:

Reflections on Keck and Carson on Reading the Bible as Scripture

This posts reflects on the quotations by Leander Keck and D.A. Carson that I posted back in August here and here, and continues a conversation that Nick Meyer started in the comments.

The quotes from Keck and Carson share a lot in common. Carson speaks of a "questing obedience"; Keck is concerned about genuinely "reading the Bible as Scripture" in a way that leads to "serious questions about what we read" and, ultimately, an obedient response.

Readers of this blog may know that my tendency is to emphasize questions. I prefer to refer to my approach as a hermeneutic of wonder rather than a hermeneutic of suspicion, but the distinction can get blurred. For this reason, Carson's challenge to approach Scripture with "reverence, a certain fear, a holy joy" comes as an important reminder.

Yet there's something that niggles at me. Carson is concerned about the dangers of an approach that by its very nature leads to a godless resistance to the text, while Keck is concerned to guard against a pious subversion of it. The one emphasizes reverence, obedience over questing, the other the genuine questioning required for questing obedience to be authentic. It seems to me that Keck fingers the fundamental problem in the evangelical conviction that the Bible is true: Because it all has to be true, there is a tendency to tame the text instead of wrestling with it. It is more honest to disagree (as an immediate, not a final response)--more honest and more dangerous because serious wrestling runs the risk of being mastered by the text (or rather, being mastered by the God who speaks through the text).

I resonate more with Keck not only because I think it is a bigger problem in my context, but also because it gets at the struggle that is involved in genuine interpretation. I am happy to affirm, with Carson, that the Bible is God's Word and that when "God speaks to us through his Word, those who profess to know him must respond in an appropriate way." But the sense of struggle is missing here, and I wonder if it is because Carson's formulation of the authority of Scripture conflates text and interpretation.

(See also Nick's independent post, as well as Larry Hurtado's thoughts on approaching the Bible as Scripture.)
Posted by d. miller at 3:08 PM No comments:

Dallas Willard on the Word of Jesus

On living in a "God-permeated world": "Until our thoughts of God have found every visible thing and event glorious with his presence, the word of Jesus has not yet fully seized us" (61-62).

On teaching outcomes: "Does the gospel I preach and teach have a natural tendency to cause people who hear it to become full-time students of Jesus?" (58)

Email ThisBlogThis!Share to TwitterShare to FacebookShare to Pinterest
Labels: Devotional

"When you are actually writing, and working as hard as you should be if you want to succeed, you will feel inadequate, stupid, and tired. If you don't feel like that, then you aren't working hard enough." - Michael C. Munger

I've got a few more substantive posts in the works, pending time.
Posted by d. miller at 9:39 AM 4 comments:

Email ThisBlogThis!Share to TwitterShare to FacebookShare to Pinterest
Labels: Writing

Letters and Papers from Prison, the Overwhelming Edition 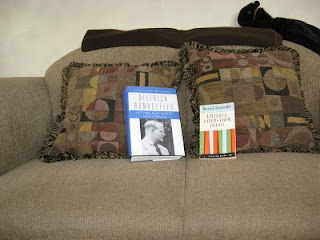 My birthday present, the new English translation of the critical edition of Dietrich Bonhoeffer's Letters and Papers from Prison

(Dietrich Bonhoeffer Works, Vol. 8; Minneapolis: Fortress, 2010), arrived yesterday. As you can see, it is considerably larger than the edition I read and quoted from earlier this year (here, here, here, here, here, and here).
I'm looking forward to adding it to the long list of books I started this summer but did not finish before the fall semester with its other, more urgent, reading demands intervened. 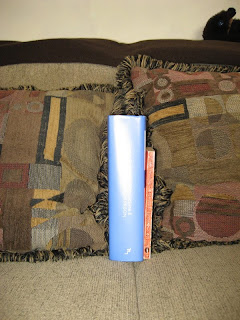 There's always next summer.
Posted by d. miller at 5:24 PM No comments:

Email ThisBlogThis!Share to TwitterShare to FacebookShare to Pinterest
Labels: Bonhoeffer

I switched on the radio to CBC's "As It Happens" last Friday and caught the last few minutes of an interview with Chris McGreal about atrocities in Congo. I was just thinking I should ask my colleague, Tim Stabell, what he thought, when Craig Norris began reading an email Tim submitted to the talk-back line. I quote Tim's email here, as it appears on the Program Log:


I was once again horrified by the news out of Congo last night, a country where we lived for about fourteen years, and where we still have many close friends.

The news of the mass rapes that took place in North Kivu was dismaying, but is nothing new, except perhaps the scale of this particular incident. Tens of thousands of women and children, and even some men, have been traumatized and victimized by this 'tactic' of war. The international community has known about this for a long time.

The CBC, along with other media outlets, are challenging the efficacy of the U.N. mission to Congo.

There is certainly good reason for a full investigation of this case, but only if it leads to a heightened, rather than a lowered, commitment on the part of the international community to work toward both prevention of further such attacks in the short-term, and a long-term political resolution that addresses the roots of the problem. The latter is closely bound up with illegal mining activity for minerals used in the electronic devices we have all come to rely on so heavily. We are now emailing one another on 'blood computers' and talking to each other on 'blood cellphones'. Until this set of realities is addressed effectively, we will continue to hear stories of horrible violence destroying the lives of our Congolese sisters and brothers."

So we are implicated. What is there to be done? Tim recommends the following:

Enough! The project to end genocide and crimes against humanity
and
Raise Hope for Congo