The Message of Romans in a Paragraph

I asked my Romans students to read the letter and summarize its message in a paragraph. As this is the first time I assigned the exercise, I decided I should try my hand at it. Here is the result:

Paul writes to introduce himself to the Roman church and to prepare for his planned trip to Spain. He does this by demonstrating why the Good News is the solution to humanity’s problem. According to Paul, the Gospel is power for the salvation of believers because it reveals God’s right action in putting the world to rights in the death and resurrection of Jesus. Chapters 1:18-3:20 demonstrate, by a ‘shoe fits’ argument, that everyone without exception is under sin, and can do nothing to deliver themselves. Chapters 3:21-5:21 describe the solution: God is shown to be righteous by paradoxically acquitting the guilty. This acquittal is secured solely by trust not by anything we do. The results of this gift of acquittal is life—present and future—through participation in the Messiah. Romans 6:1-8:16 works out the implications of this transfer of realms, demonstrating in response to objections that right action or “righteousness” paradoxically comes as a result of freedom from the law. According to Paul, participation in the Messiah necessarily results in a new Spirit-empowered life of freedom from law, sin and death, on the one hand, and "freedom" (i.e., slavery) to righteousness, on the other. The rest of chapter 8 unfolds the cosmic implications of the Christ-event, and reflects on what it means to hope in the ‘not-yet’. Chapters 9-11 defend God’s freedom and faithfulness in light of the majority of Israel’s lack of faith, and explore the implications for Gentiles. Chapters 12-15, finally, describe what it means to live as righteous people in the new age, with special reference to problems affecting the church in Rome.
Posted by d. miller at 4:42 PM No comments:

Greek Tense in a Teapot 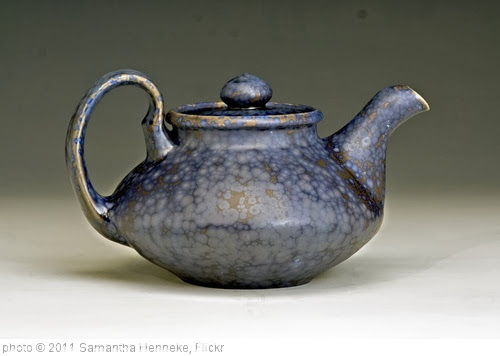 Semi-technical post alert: Since the publication of Stanley Porter's gargantuan dissertation almost 25 years ago, scholars of biblical Greek have debated whether Greek tenses convey time in the indicative mood. Porter's claim that the Greek tense system conveys aspect* and never time has found a following in Rodney Decker, Constantine R. Campbell, and D.A. Carson, with support from K.L. McKay. But, to my mind, Buist Fanning (who is followed by Daniel Wallace), Albert Rijksbaron--and just about everyone else--have the better part of the argument: In the indicative mood, Greek tenses, as a rule, convey time as well as aspect.

When the dust settles, that leaves us more-or-less where we were almost a century ago, when H.P.V. Nunn published the following:


It is somewhat unfortunate that we are compelled to use the name tense in connection with the forms of the Greek verb. It directs our attention too much to the time of the action of the verb, whereas it was the state of the action, rather than the time, that was most prominently before the mind of a Greek. The time of the action of the verb is often left to be inferred from the context, and cannot always be certainly told from the form of the verb. This is almost invariably the case with the moods other than the Indicative, and is sometimes the case in the Indicative mood itself.
To the Greek mind the forms to which we give the names "Present" and "Imperfect" denoted duration, or repeated action. The forms to which we give the name "Perfect" or "Pluperfect" denoted action complete at the time of speaking, the results of which were regarded as still existing. The forms to which we give the name "Aorist" denoted a simple, indefinite action, and were always used where no stress was laid on the continuity, completion, or incompletion of the action denoted by the verb.
As a rule the Indicative mood of the Aorist refers to an action in past time. The idea of time is however quite secondary, and does not enter at all into the meaning of the moods of the Aorist other than the Indicative, except in reported speech. With this exception the idea of Past time is only to be found in the forms of the verb which have an Augment, that is to say the Imperfect, the Pluperfect, and the Aorist Indicative.
The Future tense in Greek, as in English, refers to future time in all its moods, and is thus an exception to the principle that the tenses of the moods other than the Indicative do not denote time in Greek.
... The use of the Aorist Indicative denotes that the action is regarded simply as an event without any account being taken of its progress or of the existence of its result. Even its time is not always distinctly contemplated; but, generally speaking, it is regarded as taking place in past time. The name Aorist means without boundaries or indefinite, and denotes that the action expressed by the verb is not defined with regard to its time, progress, or result. The Aorist Indicative is most frequently used to describe a past event or series of events, viewed as a whole, without any reference to the progress of the action, or the existence of its result.
- Henry Preston Vaughan Nunn, A Short Syntax of New Testament Greek (3rd ed. Cambridge University Press: Cambridge, 1920), 66, 68.

To be sure, we would use different terminology today, but Nunn's summary still stands as an accurate thumb-nail sketch of the relationship between the Greek tense system, time, and what we now call aspect. While aspect theory has contributed significantly to our understanding of the Greek verbal system, the debate about time in the indicative mood has generated more heat than light. Time to move on.

For more along the same lines, see these excellent posts by Stephen Runge (here) and Mike Aubrey (here, here and here).

__________________
*A definition of aspect: The author or speaker’s decision to portray an action from a particular perspective or point of view—either as a process or as a whole
Posted by d. miller at 4:34 PM 2 comments: