Here's one you won't find listed at the SBL Career Center: I received the following email this morning from a certain Kumar Ali of Dubai:

we have found a suitable job for you in the Gulf area which matches your interests and your qulifications, to apply kindly log on to http://opportunityknock.net/ and submit your C.V as soon as possible

Who knew universities in the Persian Gulf were hiring in New Testament studies?
Posted by d. miller at 2:54 PM 1 comment:

The Sacred Bridge - A Recommendation for the Second Edition 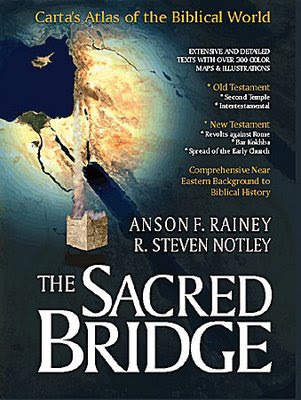 I purchased a copy of Anson F. Rainey and R. Steven Notley's The Sacred Bridge: Carta's Atlas of the Biblical World (Jerusalem: Carta, 2006), a couple years ago when I still trusted publishers' blurbs. Though it is nothing in comparison to the Barrington Atlas, The Sacred Bridge is in many ways a tremendous achievement, with fabulous maps, a first-rate critical academic discussion of everything related to the historical geography of the Bible, and extensive primary sources presented in their original languages. (See the positive RBL review here.)

I read through several chapters as bed-time reading to justify the investment, and learned a lot, but I found it hard, at times, to relate the text to the accompanying maps and illustrations.

Even more frustrating, the atlas has no dedicated map index. Earlier this week I was looking for a map with the places mentioned in Acts 2:9-11:

Parthians, Medes and Elamites, and residents of Mesopotamia, Judea and Cappadocia, Pontus and Asia, Phrygia and Pamphylia, Egypt and the parts of Libya near Cyrene, and Roman visitors, both Ioudaioi and proselytes, Cretans and Arabs...

I found one easily enough in the chapter on "The Early Days of the Church" (page 371), but the map did not include Elam. Turning to the index I found 15 page references after the entry for Elam, only 5 of which contain a map with Elam on it. What kind of atlas lacks a map index?

Hopefully, someday I will be able to announce on this blog that this problem has been rectified in the second edition of The Sacred Bridge and its abridgement, Carta's New Century Handbook and Atlas of the Bible, and that Carta has sent me a free copy...
Posted by d. miller at 8:56 PM No comments:

I once dreamed I was trying to explain the difference between the historical Jesus and the Christ of faith to a close relative. It was a nightmare really, brought on, I suspect, by reading Albert Schweitzer's brilliant Quest of the Historical Jesus. In his introduction Schweitzer explains that "hate as well as love can write a life of Jesus, and the greatest of them are written with hate" (4). He was thinking of Reimarus, and perhaps also of himself, for unlike many of his contemporaries whose Jesus was "only the reflection of Liberal Protestant face, seen at the bottom of a deep well" (George Tyrrell), Schweitzer did not like the deluded apocalyptic Jew he discovered. In an unforgettable passage, Schweitzer describes 'his' Jesus, who

"comes...and in the knowledge that he is the coming Son of Man lays hold of the wheel of the world to set it moving on that last revolution which is to bring all ordinary history to a close. It refuses to turn, and he throws himself upon it and is crushed" (370).

Schweitzer began with what he regarded as three assured results of scholarship: Markan priority, an apocalyptic Jesus, and naturalism--God may exist, but miracles do not. His review of the quest is a fascinating tale of conflict between confessional and secular scholarship in 19th century Germany. Sound familiar?

This brings me, in a roundabout way, to Nick's comment on my post (from back at the beginning of August) on Bill Arnal: "So what do you make of his [Bill's] charge that confessional scholars must necessarily find affirmative results in their investigation of the historical beginnings of their faith? It seems a fair question to ask."

I think he has a point. Conservative scholarship on the historical Jesus all too often unfolds like a Hollywood movie: You can enjoy the action because you know that everything will turn out in the end and that the ‘right’ answers you had at the beginning will be confirmed. Whatever the intentions of those involved, it seems like some scholars treat history as a game of lining up criteria and evaluating the evidence in order to confirm what they thought all along. The result tends to be predictable and rather dull.

Of course, we bring our past knowledge and experiences, our presuppositions, to everything we do. I am not advocating methodological doubt. It is fine to begin with a hypothesis that the narrative of Acts, for example, is reliable, and then test it as Colin Hemer and William Ramsay apparently did. But to study a historical question is to enter into the possibility of being wrong. It is not a safe enterprise.

The same goes for study of the Bible. Often this functions positively: Because the Bible is not safe, those who approach it as Scripture are challenged and shaped by studying it. Sometimes, however, a careful reading will lead--for some people on some occasions--to questions that deal with issues which are central to faith. For this reason too, honest study of the Bible is not a safe enterprise.

The biggest downside to Reconstructed Koine so far is that, like Modern Greek, the short 'o' vowel, omicron (ο), and the long 'o' vowel, omega (ω), are pronounced the same. Both letters are common and the similarity in sound means that it is easier to confuse the spelling of words.

Another downside is that I can't encourage my students to take advantage of oral resources designed for Erasmian, such as Danny Zacharias's excellent NT Greek Vocabulary Expansion Packs (the pictures are still nice), Jonathan Pennington's vocab and NT recordings, or Ken Berding's Sing and Learn New Testament Greek.

On the other hand, to my ear Reconstructed Koine sounds much more like a real language than the pronunciation system commonly used in North America, and I think the students can already appreciate that.
Posted by d. miller at 12:43 PM No comments:

The limits of historical study of religion

I find the comments of Israeli scholar, Daniel R. Schwartz, on the limits of a historical study of religion an interesting contrast with the secular approach I described last month (here):

[A]ny historical study of religion has its bounds: there are data, at times very important ones for a religion, which historians must leave untouched. Christianity is based upon one such datum: the perceived resurrection of Jesus, without which the movement would certainly have disappeared along with the movements following other charismatic figures in first-century Judaism. But resurrection is not susceptible to historical verification, analysis or explanation. Similarly, calls from heaven, such as that to Paul on the way to Damascus, are not susceptible to historical verification, analysis or explanation. Resurrection, calls from heaven and the like can figure in historical studies only as perceptions which, as such, functioned and entered into chains of causation. The sincerity of these perceptions needs no more proof than the numerous martyrdoms which literally testified to them.

The Myth of a Continuing Exile 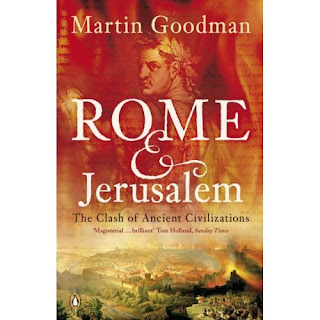 "The notion that Jews in the late Second Temple period saw themselves as sinners permanently punished by God and in need of salvation from the sufferings of exile and Roman domination is a myth expressed particularly by New Testament scholars in order to provide a theological grounding for the mission of Jesus to Israel. The most that can be said is that some wicked actions, like the internecine struggles and other sins of the Hasmonaeans in the 60s BCE, could be interpreted...as having brought about specific national disasters such as the capture of Jerusalem by Pompey in 63 BCE."

So says Martin Goodman in Rome and Jerusalem: The Clash of Ancient Civilizations (London: Penguin, 2007), 194, and I agree. Although it is more nuanced than Goodman's summary suggests, N.T. Wright's view that most Jews still saw themselves as being in exile (in some sense) is wrong.

On the other hand, after teaching Mark 1 in class this afternoon, I am reminded again how well Wright's model explains the introduction to Mark's Gospel. Mark certainly uses the imagery of exile and return metaphorically to describe the activity of John--the voice calling in the wilderness (Isa 40:3)--and Jesus, whose Gospel ministry John prepared.

This is the first of three posts on this topic. Here are the other two:
N.T. Wright on the Continuing Exile
Why N.T. Wright is Not Totally Right
Posted by d. miller at 8:51 AM 4 comments:

My faculty assistant, a Briercrest College grad and future biblical scholar, Luke Johnson, was kind enough to compose and teach my students a catchy Greek alphabet song using the reconstructed Koine pronunciation. They loved it! With Luke's permission, I have uploaded his recording here. Luke also sent me a pdf with the chords for anyone with the requisite guitar skills. (The recording may seem a bit fast, but the song can be played slower, and is suited to a call-and-response format.)
Posted by d. miller at 9:55 PM No comments:

On Saturday afternoon, at the end of our 9 hours of "language camp," one of my students described how her Spanish teacher in South America spent a lot of time just talking to them in Spanish. In retrospect, I wish I had done a lot more talking or reading in Greek, and a bit less time up front trying to get them to talk.

So while I can hear the question, "is it really worth it?", I am more convinced than ever of the importance of extended exposure to the sound of the language. I'm pretty sure that confidence pronouncing the language fluidly, if not fluently, goes a long way toward easing the challenge of facing and translating unfamiliar texts.
Posted by d. miller at 9:30 PM 3 comments:

It has been a very busy two and a half weeks. We were in Indiana over the long weekend for my sister's wedding: "We have folks who came from as far away as . . . Say-sketch-ee-wan. Did I say that right?" The next day in church I had this awkward conversation:

Lady: Where are you from?
d.: Saskatchewan
Lady: My geography is a little weak. Is that near where your brother lives?
(Long pause, as I ponder whether she thinks Saskatchewan is near the South Asian country where my brother normally resides, or merely near Ontario where he is on leave. I decide on the latter option.)
d.: Um...Saskatchewan is north of North Dakota. My brother lives in Ontario, which is north of Michigan.
Lady: Oh.

The conversation went down-hill from there, as much because of my stunted small-talk skills as anything else. But it was great to be at the wedding and to catch up with family!

Before our Indiana trip I tried unsuccessfully to complete second semester syllabi by our August 31 deadline. This evening I am putting the finishing touches on class prep for Introductory Greek language camp, which begins tomorrow afternoon and runs all day Saturday. Once that is done, I need to prepare for my first Monday evening Greek Exegesis II class. Then, perhaps, I will have time to polish off one of the dozen or so posts fermenting in my draft folder.

Oh, and I'm also trying to teach my daughter how to say upsilon in Reconstructed Koine: 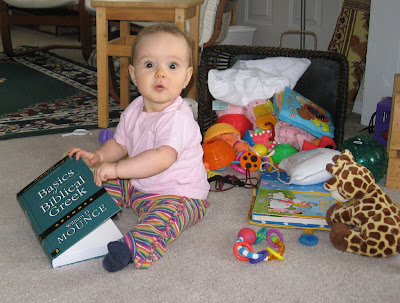