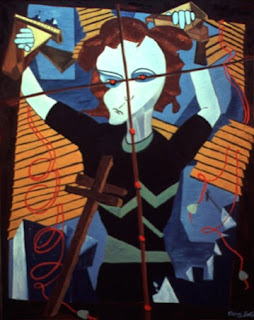 "The painting did not say fully what I had wanted to say; it did not reflect fully the anguish and torment I had wanted to put into it. Within myself, a warning voice spoke soundlessly of fraud. I had brought something incomplete into the world. Now I felt its incompleteness. . . . Only I would have known. But it would have made me a whore to leave it incomplete. It would have made it easier to leave future work incomplete. It would have made it more and more difficult to draw upon that additional aching surge of effort that is always the difference between integrity and deceit in a created work. I would not be the whore to my own existence. Can you understand that?" - Chaim Potok, My Name is Asher Lev (New York: Fawcett, 1972), 328.
Posted by d. miller at 10:17 PM 1 comment:

I break my blogging silence to mention Robert Morgan's must-read obituary of C.K. Barrett, who--says Morgan--tied with C.H. Dodd as "the greatest British New Testament scholar of the 20th century":


Barrett's natural gifts were reinforced by a robust constitution and formidable capacity for hard work. ... Each night [during his time as a pastor], the hours from 10pm to 2am were set aside for research. The lectureship at Durham in 1945, and chair in 1958, allowed him to settle into a more reasonable 14-hour day, which he carried into retirement.

Here is another obituary in the Telegraph, whose author obviously missed Barrett's sense of humour.

My own reflections on Barrett are here.
Posted by d. miller at 7:15 AM No comments: