"Then are ye bastards and not sons": The Bible, Translations and Profane Speech

One of my acquaintances from seminary days wrote his Ph.D. dissertation on The Ethics of Obscene Speech in Early Christianity and Its Environment

. The cost of the published monograph is itself obscene, but my recollection from looking at a copy at SBL a couple years ago is that the book deals with instructions about profanity in the NT.

Also worthy of study is the way modern translations handle biblical profanity. Why, for example, do most modern translations tone down the language of Heb 12:8, which was meant to be shocking, by rendering νόθος as 'illegitimate' instead of 'bastard'? Is it merely because language has changed--"illegitimate" is today's equivalent to King James's "bastard"--or because NT translations have toned down the force of the original out of deference to modern sensibilities? I suspect the latter.

Here's how the KJV renders the whole verse: "But if ye be without chastisement, whereof all are partakers, then are ye bastards, and not sons."


The RSV, NRSV, ESV, NET, NLT, NIV, NASB and even the NKJV all read "illegitimate."

Only the NAB and NJB get it "right":

Email ThisBlogThis!Share to TwitterShare to FacebookShare to Pinterest
Labels: Translation

I thought our 7 foot snow drifts would take the prize for biggest drift in town... 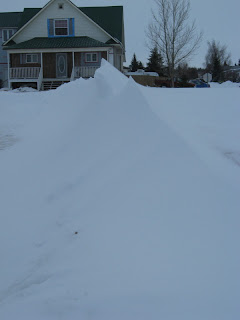 ...until one of my students mentioned the 7 foot drift in their neighbour's driveway. (Ours, fortunately, were mostly to one side of our driveway.) 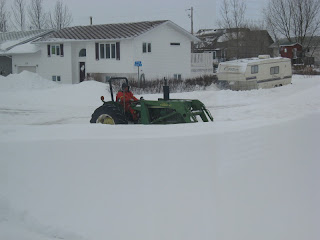 The back yard, with drifts above our back fence: 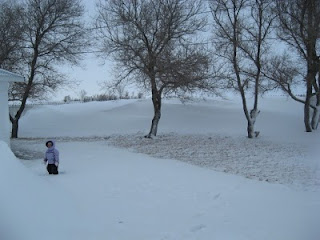 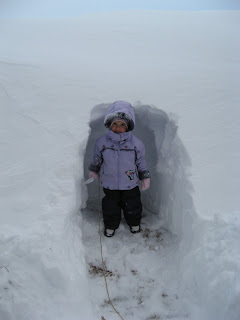 Update: 7 feet may be a slight exaggeration, but they were taller than me before the neighbour kids got to them. It's official: Our village constable confirmed ours as the biggest drift.
Posted by d. miller at 8:22 PM 1 comment:

Yesterday I skimmed through the 200+ blog posts that accumulated in my Blog reader over the last week, and highlighted a few links for subsequent, more detailed perusal.

The highlight is this excellent interview with Richard B. Hays.

to Enns's book, Inspiration and Incarnation: Evangelicals and the Problem of the Old Testament

, makes interesting reading. No surprise, Enns doesn't like the book. Here's his conclusion:


"Beale laments that the doctrine of inerrancy is eroding. In my opinion, the reason for this is not the insidious influence of a new breed of evangelical scholars, but the very thinking displayed in this book. If Erosion represents the kind of work necessary to defend the model of inerrancy Beale fancies, the erosion he fears may quickly become a landslide."

My mom was hospitalized a week ago today. Initial diagnosis was a brain tumor. After looking at the CT scan the dr. suggested a brain infection. We're still waiting for a definitive diagnosis. Mom is still in the hospital.

This is what the AmTrak website has to say about the train we were scheduled to depart on this afternoon:

Information Unavailable: Sorry, due to a service disruption, we are unable to provide estimated departure and arrival times. For additional assistance, please contact us at 1-800-USA-RAIL (1-800-872-7245)

When translated (and 'targumed' by an AmTrak representative) this means our train is not running until Jan 12 at the earliest. I am supposed to start teaching on the 11th, so the plan is to rent a car and drive to remote Montana where our car is parked. My father-in-law will come along and drive the car back to Portland; we will drive the rest of the way in our own car back to Caronport. Good thing my first classes are more-or-less prepared.
Posted by d. miller at 9:18 AM 1 comment:

As a Driven Leaf

Update: I wrote this yesterday and scheduled it to be posted today when I expected to be on the train from Portland to Montana. We found out when we showed up at the train station yesterday afternoon that our train was canceled due to extreme winter weather conditions in North Dakota; trains are not running today either. Hopefully, service will resume on Saturday so that I can make it back in time to begin teaching on Monday.

On the Emperor Builder today, I may well finish Milton Steinberg's excellent novel, As a Driven Leaf. First published in 1939, the novel is about Rabbi Elisha ben Abuyah, a historical figure who, according to rabbinic sources, was excommunicated for heresy. The novel is a well-written, compelling story, but it is also fascinating on several additional levels:

I am happy to dub Windows Booksellers the new best Christian used book store in Portland. Although Windows has been operating in Portland since 2002, I only found out about them on this visit when I began to look for an alternative to the now-defunct Pilgrim Discount. I came away with cheap copies of several classics:

But I am especially excited about the following two by the late C.F.D. Moule:
Moule, C. F. D. The Epistles of Paul the Apostle to the Colossians and to Philemon. Cambridge: Cambridge University Press, 1962.
Moule, C. F. D. The Birth of the New Testament. 3rd ed. San Francisco: Harper & Row, 1982.

The first I plan to read as I teach Greek Exegesis this semester, the second I recall being mentioned in several Moule obituaries.


Windows Booksellers also has a very large store in Eugene, OR.
Posted by d. miller at 11:29 AM 1 comment:

Grace alone treats sin with full seriousness.
Posted by d. miller at 8:58 AM No comments: