"The New Testament is written in first-century Greek: diction, grammar, and syntax are not subject to the whim of readers. Writings can say only what the Koine of that time allows them to say. The only truly responsible reading of the New Testament, consequently, is one based on the Greek text in its historical specificity." - Luke Timothy Johnson, The New Testament: A Very Short Introduction (Oxford: 2010), 5.

One could say the same thing, of course, about the Old Testament and Hebrew.

This summer--before the Melania Trump and Peter T. O'Brien plagiarism cases made news headlines--I was asked to contribute to an academic honesty mini-course designed for incoming Briercrest College students.

You can click on the video if you want to hear what I said, though I should note that the best thing about it is the short talk at the beginning by recent Briercrest graduate, Breanna Bowker, on the importance of reading.

At the risk of subverting the point I was trying to make in the video, what I'd like to do here is add a little nuance:

(1) Plagiarism in biblical (and related) scholarship: Plagiarism, unfortunately, is not limited to college papers. Two examples:
(2) Accidental quotation: The page-proofs of an article I wrote failed to type-set a lengthy quotation in block quotes. If I had not proof-read carefully, the quotation would have appeared in print as if it were my own. It would have been a mistake of the type-setter, entirely unintentional, but still--according to the definition I'm using--plagiarism. I hope my readers would have granted me grace.

(3) Forgotten Influences:  In the abstract for a paper that I am currently completing I referred to "a perceived threat to Jewish identity." When I composed the abstract, I'm sure I thought my formulation was original, but I recently came across Robert Tannehill's comment that "the cry of the accusers in the temple [in Acts 21:28] is the cry of a people trying to maintain itself against a perceived threat to its identity" (1990: 272), and I expect it influenced me when I first began work on the topic. Then again, F. Scott Spencer's 1997 commentary on Acts says almost the same thing without any reference to Tannehill:


Throughout the Greco-Roman world, scores of Gentile converts ignorant of the Mosaic law, at best, or prejudiced against it, at worst, have been incorporated into believing communities alongside Jews, thus creating a perceived threat to Jewish identity. (Spencer 1997; repr. 2004: 209)


Is this the independent identical formulation of a commonplace observation or a sign of the pervasive--but unacknowledged and possibly forgotten--influence of Robert Tannehill?


(3) Unmarked quotations and oral presentations: Conventions are less-defined for oral presentations, and it can be difficult to know what is appropriate documentation. In the script that I composed and basically memorized for the video, I included quotation marks when I defined plagiarism as "a failure to acknowledge sources," but I did not indicate where I got the phrase. (I reasoned that a popular talk of this sort would be distracting if I added a footnote.) Does this mean my definition of plagiarism is itself plagiarized? Just to be on the safe side, I hereby acknowledge my colleague, Rhoda Cairns, as my source. (For the ethics of documentation in sermons, see this post.)

All this does not change how I will deal with clear cases of plagiarism that I encounter in the classroom. No one will get away by appealing to the examples in this blog post.

When I do chat with students, however, I always emphasize that plagiarism is a major sin in an academic context, and I try to keep matters in perspective. There are far greater moral issues than this particular kind of theft, including the deadly sins of pride, envy, and greed, to which academics are perhaps especially prone. Still, I hope my students learn assiduously to avoid the minor sin of plagiarism in any academic and other writing and speaking that they do.
Posted by d. miller at 4:27 PM No comments: 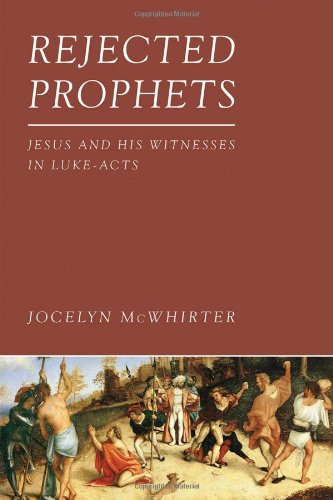 I rang in the new year--just about--by hitting "submit" on my RBL review of Jocelyn McWhirter's Rejected Prophets: Jesus and His Witnesses in Luke-Acts (Minneapolis: Fortress, 2014).

Nine months later, the review has now appeared. (For the record, I don't recommend binge writing over the Christmas holidays.)

Here is the final paragraph:

"Although readers will doubtless quibble over specific aspects of her argument, Rejected Prophets is a valuable contribution to scholarship on prophecy in Luke-Acts, and to the study of Luke-Acts in general. Specialists who are not persuaded by an approach that views Luke as a Jewish author writing within a Jewish context will still benefit from her careful attention to Luke’s use of the Jewish Scriptures, and to her explication of an important Lukan theme. Because it relates the theme of prophecy to other major themes in Luke-Acts, Rejected Prophets would work well as an introduction to Luke-Acts as a whole. The volume is accessible to beginning students who lack the original languages and who are unfamiliar with the historical context. More important still, McWhirter introduces Luke to her readers as a consummate story-teller and skillful reader of Scripture, illustrating at the same time how Luke’s own work may be read with profit."