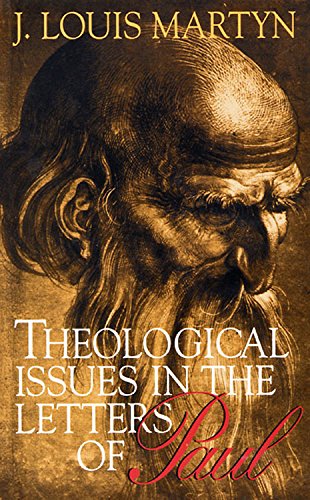 In the better-late-than-never, the-classics-are-still-worth-reading category, I am slowly working my way through J. Louis Martyn's Theological Issues in the Letters of Paul. The chapter on "Leo Baeck's Reading of Paul" is the best in the bunch (so far). Martyn shows that Baeck gets Paul wrong, but observes that Baeck's critique of Paul is a tragically accurate description of too much of modern Christianity:


"[S]everance from the Old Testament has always thrown the church into some form of ethical chaos, dangerous both to itself and to others. Baeck's ethical challenge is extraordinarily perceptive. He sees that what is commonly called ethics has had a very hard time finding a recognized and stable home in Christianity. Indeed, over the span of centuries, the dominant picture ... is the one in which ethics is excluded from the sphere considered proper to Christianity, either by being banned to live in a sort of shabby lean-to, having no organic relation to the main house of faith, or by being handed over entirely to the state. Not infrequently ethics has thus become, at worst, the sanctification of a tyrannical government and, at best, 'a message that is perceived dimly, as if from a vast distance, a message that can mean everything while demanding nothing ...' From such ethics one learns to be prudent, to find the modus vivendi; and thus, in the end, one falls into the kind of casuistry that can be comfortable with the neighbor's suffering. About this part of Baeck's charge there can be no argument. Christian history provides more examples than one wishes to enumerate.

"The full profundity of Baeck's analysis of Christian ethics ensues, however, from his recognition that the organic relationship between faith and ethics is equally compromised when ethics moves in from the lean-to and takes over the house, pretending to be the whole of Christianity, thus rendering unnecessary and, in fact, useless, everything having to do with the mystery of God's transcendent and prevenient activity. Here we have the pattern Baeck identifies as 'the commandment without the mystery.'"

One is tempted to identify the first problem--a shabby-lean-to ethics that emphasizes faith to the neglect of obedience--with the American Evangelical 81%, and the second with progressive Christianity, but a preoccupation with what we should do to the neglect of God's saving intervention, is not the preserve of progressives alone.

Incidentally, exploring the relationship between faith and ethics was, in a way, the premise behind the book Susan Wendel and I co-edited.
Posted by d. miller at 2:33 PM No comments: