The Holy Kiss as Family Practice among Christian Brothers 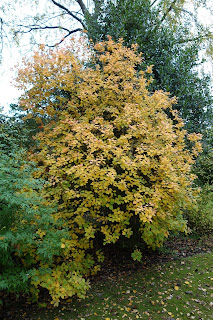 Among the biblical imperatives almost universally ignored by modern western Christians is Paul’s repeated injunction to “greet one another with a holy kiss” (Rom 16:16; 1 Cor 16:20; 2 Cor 13:12; 1 Thess 5:26). In an effort to live up to its Truth Made Clear™ motto, the New Living Translation replaces the concrete kiss with the abstraction of “Christian love.” This attempt to retain a timeless meaning while discarding the cultural husk obscures the real—and really challenging—point of the command, which has less to do with the heartiness of the handshake than with the embodiment of family.

In the Bible we encounter kissing between rulers and subjects (2 Sam 15:5; Ps 2:12), between a host and his guest (Luke 7:45), and between close friends (1 Sam 20:41), but in both the Bible and Greco-Roman society kissing was most commonly practiced between relatives (see Song of Solomon 8:1). In its first-century context, then, the “holy kiss” was a transgressive act:

When slaves and their owners, gentiles and Jews, and males and females in Paul’s churches kissed each other, they enacted family unity, demonstrating to themselves and others that they really were brothers and sisters in Christ, members of one body. If the goal of translation is to convey the—in this case shocking—effect of the original, NLT’s “Greet each other with Christian love” fails miserably. I am not proposing that churches today should add a literal “holy kiss” into their order of service, but they should probably have the chance to be exposed to what Paul actually said so that they can reflect on what an analogous contemporary practice might look like. (If you are like me, such reflection is unsettling.)

Alongside the kiss was the early Christian practice of addressing fellow believers as “brothers.” Unfortunately, readers of the NIV, NLT and other dynamic equivalence translations will sometimes miss the import of this speech act. I have no objection to replacing the Greek word for “brothers” with the gender neutral “brothers and sisters,” but when translators substitute the less cumbersome “believers,” the family connotations of the underlying Greek expression are lost—and these connotations are hugely significant both for the meaning of the term and its effect on those among whom it was used.

In the early Jewish book of Tobit, for example, marriage makes husband and wife “brother” and “sister” (7:12)—if, that is, marriage is kept in the family. Tobias addresses his new bride Sarah as “sister” (8:4) after he dutifully followed his father’s instruction to choose a wife from among his brothers, just like Abraham and the patriarchs (4:12; 6:16). In Tobit, the family ultimately includes all Israelites, who as descendants from Abraham are “brothers” (e.g., 1:3, 10, 16). The marriage between Sarah and her close relative, Tobias, is emblematic of a concern in the book to promote endogamy within the larger family of Israel and prohibit intermarriage with gentiles.

In 1 Maccabees, “brothers” frequently denotes those faithful Israelites who stood with Judas and his literal brothers (e.g., 1 Macc 2:40-41; 5:32). It is true that later in the book, Jonathan and the “assembly of the Jews” address the Spartans as “brothers,” but this exceptional usage proves the rule, for the Spartans explain in their reply that they had discovered that both Jews and Spartans were descendants of Abraham (1 Macc 12:21). (With Christopher Jones**, I take it that the assertion of kinship was believed to be genuine, not just a rhetorical device.)

Despite differences in where they draw the boundaries, Tobit and 1 Maccabees illustrate a wider Jewish pattern of usage drawn from the Hebrew Bible, which can use “brother” to refer to any descendant of Israel (e.g., Deut 17:15).

Much like giving a kiss, then, Christians in Paul’s churches who addressed each other as “brother” or “sister” were signaling that they were family, insiders as opposed to outsiders. (I should add that even though the new Christian family reflected in Paul’s letters crossed ethnic boundaries, it was just as exclusive in its own way as the Jewish pattern from which it was derived.)

In the next post, I want to explore how “brother” is used as a form of address in Acts. There is, I think, a consistent pattern that is intentional, but also rather puzzling. 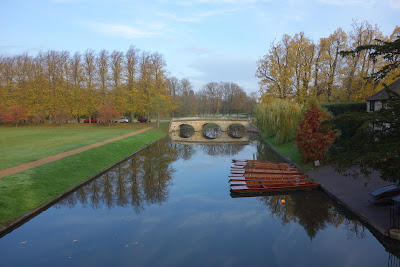 Both trips were a treat. In Dublin we got to see biblical manuscripts in the Chester Beatty Library ... 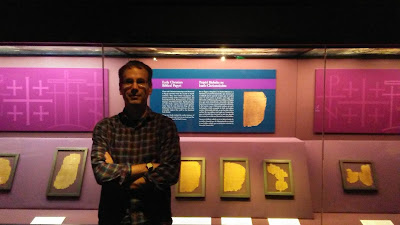 ... and to marvel at Trinity College Dublin's Old Library: 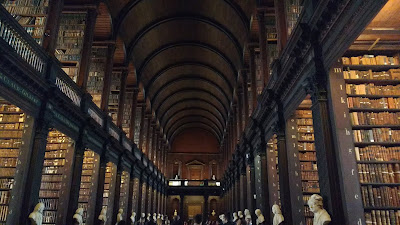 Saskatchewan in October calls for a more refined palate that can appreciate different shades of brown, but the interaction with students, friends, and colleagues was rich, and the week of teaching "Jewish Backgrounds to Early Christianity" was very satisfying. I also had a few conversations that make me excited about the prospect of returning to full-time teaching next fall (see #4 below).

Real life takes precedence over the virtual, but I want to mention a few things quickly:

(1) Ambiguities in Acts: I hope to resume my blog series on the Law (and related topics) in the book of Acts shortly.

(2) The soundtrack to my daily commute right now is the audiobook version of Charles Marsh's superb Strange Glory: A Life of Dietrich Bonhoeffer (Vintage, 2015). This is no hagiography of Bonhoeffer, and all the better for that. Perhaps most remarkable from my middle-aged vantage point is that by age 25 Bonhoeffer had two doctorates, and by the age of 30 he was one of Germany's most vocal opponents to Hitler. What might the 20-somethings of today accomplish?

(3) One of the best available Bible programs--one that also happens to be free--has decided to make its accurate tagged databases of the Hebrew Bible, Septuagint, and Greek New Testament freely available for others to use and develop. Kudos to David Instone-Brewer and STEP Bible.

(4) Learn Ancient Greek as a Living Language in 2019: I am delighted to announce that Briercrest College and Seminary plans to offer an intensive sequence of 5 Greek courses next fall, all in one semester. Instead of the traditional grammar-translation approach, the courses will be team-taught in Koiné Greek, drawing on best practices in second language acquisition. I will have more to say about the program later on. In the meantime, you can read a selection of my earlier posts about teaching and learning Greek and Hebrew as living languages here, here, here, and here.
Posted by d. miller at 2:15 PM No comments: