"[A]ll our good works are the works of God himself, the works for which he has prepared us beforehand. Good works then are ordained for the sake of salvation, but they are in the end those which God himself works within us. They are his gift, but it is our task to walk in them at every moment of our lives, knowing all the time that any good works of our own could never help us to abide before the judgement of God. . . . From this it follows that we can never be conscious of our good works. Our sanctification is veiled from our eyes until the last day, when all secrets will be disclosed. If we want to see some results here and assess our own spiritual state, and have not the patience to wait, we have our reward. The moment we begin to feel satisfied that we are making some progress along the road of sanctification, it is all the more necessary to repent and confess that all our righteousnesses are as filthy rags." - Dietrich Bonhoeffer, The Cost of Discipleship

Pursuing grades and chasing after wind

It's no secret that most academics' least favorite task is grading assignments. That's not to say we blow off the job, grading essays by throwing them down the stairs and marking where they land. I tell my students that learning how to think clearly and to express themselves well is one of the most important things they can learn, and I endeavour to provide constructive feedback along the way. Much more onerous is the task of actually assigning a grade, but I do my best to be fair here as well. (I typically assign all my students a preliminary mark and then review the bunch to check for consistency. After all, I tend to be more cheerful after supper than before it...and, who knows, my mood may affect my judgement.)

My complaint, though, is not with the urgent pile of marking on my desk, but with the whole system of marking, and the orientation it encourages. The problem is that competition for marks misses the main thing. Though top marks might help a student get into grad school, in all likelihood once they have a job, nobody will care. Pursue learning, strive to do your personal best, and the marks will follow. Pursue marks, and you run the risk of missing an education.

The spirit of competition that a misguided focus on grades can foster is the dark side of the force. It may lead to better results on your transcripts, but it does so by feeding on your soul. (If I seem unusually passionate about this it is because I struggle with the same problem, and need to be reminded periodically that the life of an academic--in any Christian sense--is not about status, publishing the most books or articles, or being--egad!--popular.) Christians are called to outdo one another in showing honour and to leave no debt outstanding except the continued debt to love one another.

The only positive kind of competition, then, is with yourself. Back in December I listened to an interview with Richard Carnegie (scroll down to page 8 in this pdf), a double bass player whose Youtube video won him a trip to play in the 2011 YouTube Symphony Orchestra at the Sydney Opera House in Australia. Toward the end of the interview, Carnegie was asked what he thought of his chances of winning. He replied by saying something like, "I don't really know. All I'm really concerned about is improving my own performance, not ranking myself in comparison with others."

I can't find the interview online, but here is Richard's winning audition video: 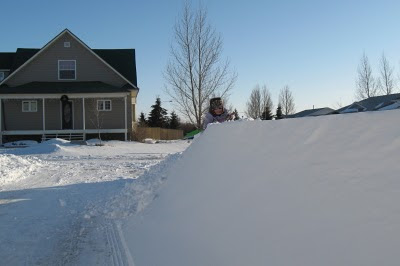 I laughed outright when someone told me--before we moved--that Saskatchewan winters last six months. But sure enough, we've had snow on the ground since the beginning of November, if my memory serves, which means we are now well into month five.

I took the photos of our driveway this afternoon. The temperature: - 10 celsius.


We're supposed to have highs above freezing starting tomorrow, but I'll be surprised if the snow is all gone before April. 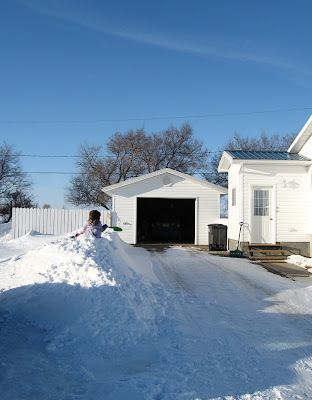 To be fair, this has been a long and cold winter even by Saskatchewan standards, and we've never had this much snow in the seven years we've lived here. 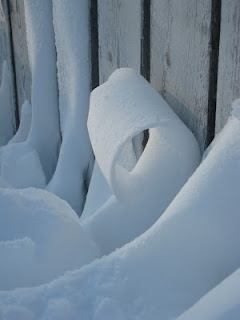 I purchased Nuance Software's Dragon Naturally Speaking speech recognition program last month in an effort to streamline the process of creating course content for a new Distance Learning course on the book of Acts. I began recording my in-class lectures during the fall when I abandoned the idea of preparing full written notes while the course was in session. In theory, the recordings will help me get back into the moment of teaching and think about how to fill out my terse lecture notes. But who wants to listen to themselves talk for hours on end? Why not let today's technology transcribe the lectures for me? Answer: Today's technology is not up to the task. Here are the results from an experiment on a recording of a class on Acts 20:

First, my lecture notes:
Second, my own transcription of the first two minutes of the recording (where it is obvious why I don't like to listen to myself talk):


And what we’ve got in uh this section—So the first slide is trying to capture what what Gaventa said about this section that here is a concentrated section punctuated with travel narratives that talks about life in the church. So there’s not a lot of evangelism going on. Paul is spending time with churches. Um. And that I think is significant. Gaventa—this is interesting—suggests that the itineraries uh may be significant in that they consolidate the believers in a variety of different places. And there’s this really emotional meeting with churches in places where we haven’t even seen Paul spend time. And um so a sense of unity in the church and then right in the middle of the section you have the only pastoral speech in Acts where uh there’s an extended speech addressed to a Christian audience. This is uh important for me because as we’ve been going through Acts this time one of the main things that I’ve been interested in is trying to reflect on the question, “What what is Luke presenting that he thinks is maybe an ideal for the earliest church and what does he think is a model or what does he think is typical uh for the church in his own day? And I’m guessing, I guess, uh that this section is one of the the clearest windows, the most transparent windows onto the church in uh Luke’s own days, and and so what Paul is saying to the church, to the Ephesian elders, is presumably the types of things that that would be straightforward what Luke thinks church leaders in his own day should grab onto. And and so the types of things that he says can be maybe an interpretive key, a hermeneutical key...

And here is what Nuance came up with (notice the references to juice, a "policy research zone", Windows and zombies):


What we've got in this section so the first that talks about life church as it is unlikely with your juice and that I think is significant event. It is interesting suggests that the itineraries may be significant in that they consolidate the believers in a variety of different places in this is really emotional eating with churches and places were not and is a unity in the church and in right in the middle of the section you have the only pastoral speech in acts where it is an extended speech addressed to a Christian audience. This is important for me because as remain going through this on the meaning is done? Let us was median. I feel further policy research zone and I'm guessing I guess that this section is one of the the there is Windows the most transfer windows onto the church and the zombies and someone the types of things that that would be straightforward. What do things try to capture ...

For the record, the program worked great when I tried dictating clearly and deliberately into a microphone headset, but $100 is a lot to spend for a dictation program that I will seldom use. The idea sounds (and looks) nice:

...but unfortunately, I generally need to write down what I want to say before I say it. The thought of composing orally in complete sentences is as big a mental block as a blank screen. So here's hoping Nuance's 30 day money-back guarantee works as promised!

On the positive side, having to listen to my lectures again may help me improve my public speaking.
Posted by d. miller at 11:16 AM 2 comments: