A Short Reflection on Theology and Biblical Studies 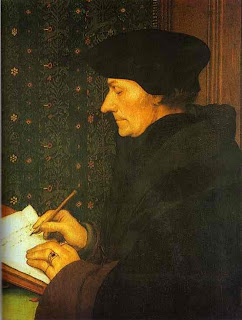 As I make my way through J. Christiaan Beker's excellent Paul the Apostle: The Triumph of God in Life and Thought (Philadelphia: Fortress, 1980), I've been wondering how anyone can be a New Testament scholar and disdain theology. Much as I dislike theology of the Erickson/Ryrie variety--the kind that tries to tie all the loose end together into a logical system--reactions against "theology" by Biblical Studies people (including myself), has impoverished the discipline.

The converse is also true, of course. Here is one of the quotes by Erasmus that I keep on hand for biblical language pep talks:

"Therefore, dear Martin, out of my good will toward you, I will not stop encouraging you, as I have done before, at least to add the knowledge of Greek letters to your studies. . . . Believe me, if you add the summit of Greek letters to your very distinguished undertakings, I would dare to predict both to myself and others a great future for you and accomplishments not as yet equaled by any of the modern theologians. But if you hold the view that all human learning should be despised out of love for true piety, and that one arrives at this wisdom much more quickly through a certain transformation in Christ, and if it is your judgment that everything else worth learning can be seen more fully in the light of faith than in the books of men, I would gladly agree with your opinion. But if, as matters now stand, you promise yourself a true understanding of theology without a knowledge of languages and especially of that language in which the majority of the Divine Writings have been handed down, you have strayed far off the path." - From Erasmus's "Letter to Martin Dorp, May 1515." In Erasmus, Christian Humanism and the Reformation: Selected Writings of Erasmus with the Life of Erasmus by Beatus Rhenanus (Edited by John C. Olin. Rev. ed. 1965. Repr. New York: Fordham University Press, 1975), pp. 80-81.

Update: See the addition below.

I get to teach an upper-level elective on the book of Romans every second year. Since my primary research focus is elsewhere, staying abreast of all the recent important scholarship on Romans is out of the question. My compromise is to try to read a few important books on Romans or Paul each time I ramp up to teach the course. (See this post for an earlier list.)

On my list this time are a couple seminal books on Paul from my bookshelf--which I acquired because they are important but never got around to reading--and a couple newish finds on Romans from the Archibald Library.

I will comment on the list below, but first let me say that I am interested in recommendations: What are some recent Romans and/or Paul 'must-reads' that I should not overlook?

Note: If I could get my hands on an advance copy of N.T. Wright's Paul and the Faithfulness of God, it would be on my list.

I will be teaching second year Hebrew for the first time beginning this fall, and second year Greek for the first time in four years. I will also be teaching Romans as a combined college and seminar modular course (Oct 21-25). Although I have taught Romans several three times, I have never taught a mod before, so that will be another new experience. To fill out my seven course / year teaching assignment, I will be teaching Gospels and Jewish Backgrounds, along with the fourth semester of Hebrew and Greek next winter.

I mention this now because I am spending the day working on course design before the textbook order deadline at the end of this month, and I may post a question or two here presently.
Posted by d. miller at 2:42 PM No comments: