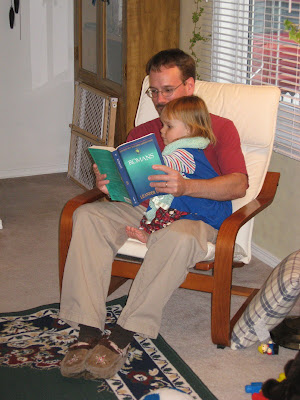 Keck is a very careful reader of Paul, and a fine (and witty) writer. He appears to have thought about nearly every question, and his answers are succinct and clear. I dare say his commentary ranks with the major commentaries of Jewett, Dunn, Fitzmyer, Moo and Cranfield in its attention to the interpretive issues in Romans, but he addresses them in much smaller compass. As an added bonus, Keck writes as if what Paul says has life-changing significance. Paul J. Achtemeier, author of another short commentary on Romans says "This is as good a commentary on Romans as is likely to come down the pike."

The only downside of the commentary is that it is, perhaps, a little too compact. (I suppose transliterated Greek can be off-putting too for readers who don't have Greek.) This is the second time I have assigned Keck as a textbook in a 3rd year undergraduate Romans course. This time through my students are letting me know that Keck, like Paul, is a challenging read.
Posted by d. miller at 7:52 PM

Email ThisBlogThis!Share to TwitterShare to FacebookShare to Pinterest
Labels: Romans

She is so cute! Is that the blanket Grandma made her?

It is. Much loved and well-worn.