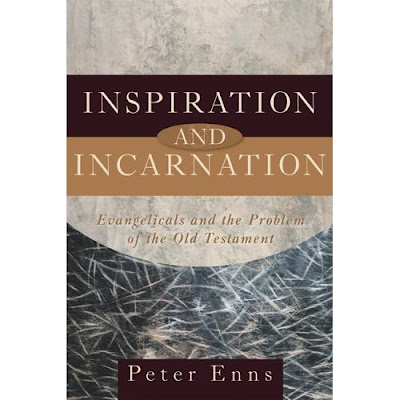 Three years ago Baker Books gave away free copies of Inspiration and Incarnation at the reception they hosted for the Institute for Biblical Research in Philadelphia. The book looked interesting--the Baker representative said it was important--but I didn't do more than peruse its contents before it was shelved with the other books acquired at SBL that I hoped to read sometime. As a New Testament scholar, books on the "problem of the Old Testament," however worthy, tend to get superseded by others closer to my primary areas of research.

The news that controversy surrounding the book resulted in a decision yesterday to suspend Peter Enns from his position as Associate Professor of Old Testament at Westminster Theological Seminary, has catapulted the book to (near) the top of my "to read" list. I even brought the book home this afternoon and read the preface, where Enns thanks his colleagues at Westminster for their openness to dealing with difficult questions. I quote:

Also influential has been my own theological tradition, represented by my colleagues at Westminster Theological Seminary, past and present, and the wider tradition of which that institution is a part. This is not to imply that I speak for that institution or tradition. Nevertheless, I am thankful for being part of such a solidly faithful group that does not shy away from some difficult yet basic questions and with whom I am able to have frank and open discussions. This does not happen at every institution, and I do not take that privilege for granted....I believe with all my heart that honesty with oneself is a central component to spiritual growth. God honors our honest questions. He is not surprised by them, nor is he ashamed to be our God when we pose them. He is our God, not because of the questions we ask (or refrain from asking), but because he has united us to the risen Christ. And being a part of God's family is ultimately a gift to us, not something to be obtained by us. God has freed us in Christ and made us his children. And, as all children do, we ask a lot of questions.

I heard about Enns' suspension. I haven't read the book, but now I am quite curious about it.