Wow, thanks for all the responses! I'll have to try something more challenging next time. But first a couple more thoughts on the Romans 13:3 inscription from Caesarea: 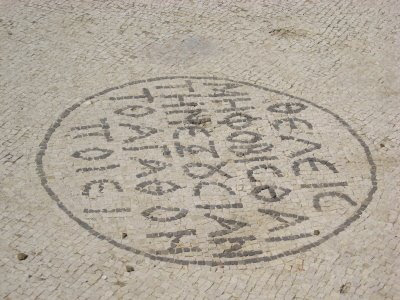 The inscription dates from the Byzantine era, and as Randall Buth explained "It was in the government office for public accounts and taxes and was an encouragement to pay in full." ..... Here's what Jerome Murphy-O'Connor has to say:

"The frequent repairs of the mosaic sidewalk [along the Cardo] are evident outside the Byzantine Archive Building. . . . The identification of the edifice is based on an inscription found in the doorway . . . . It read, 'Christ help Ampelios, the keeper of the archives, and Musonius, the financial secretary, and the other archivists of the same depository.' The circular inscriptions in the centre of the rooms on either side of the entrance use religion to encourage payment of taxes. Both are a quotation from Paul's letter to the Romans, 'If you would not fear authority, do good'. The inscription in the room to the left also contains the next clause 'and you will have praise from it' (13: 3)." - Jerome Murphy-O'Connor, The Holy Land: An Oxford Archaeological Guide

In the inscription displayed above, the only lexical difference from our standard Greek text of Rom 13:3b is the omission of δέ after θέλεις, which makes sense because the inscription stands on its own instead of continuing the thought of Rom 13:1-3a. There are also two spelling variations:
Isaac inquired about the use of the "lunate" C-shaped sigma. All I knew was that it was common, but Wikipedia says it was more common in "Eastern forms of Greek writing." (More information here and here.) Evidently it was common enough to be used in architecture. Our guide explained that this C-shaped row of shops in Scythopolis/Beit Shan) was known as a Sigma: 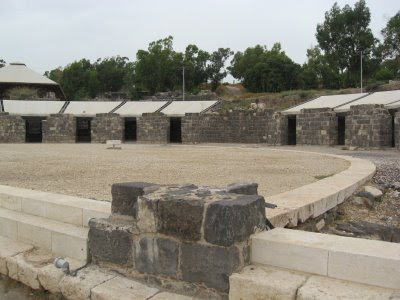