The Lord's Prayer in Hebrew 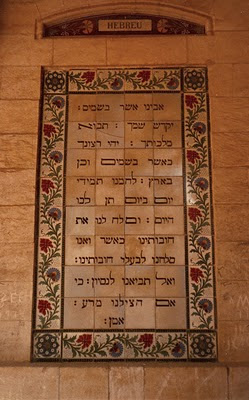 (Update:Hagop Karakashian informs me that he will be producing a tile with the Lord's Prayer in Hebrew in 2011.)

When I was in Jerusalem last year I wondered again why I could walk into shop after shop in the Old City and find identical "Armenian" "handpainted" ceramic plate renditions of the Lord's Prayer in Greek, Arabic and Syriac, but not Hebrew. So I made my way to the Karakashian Bros' Jerusalem Pottery shop--famous for its original, genuinely Armenian work--and asked the proprietor if he knew of any Hebrew versions of the Lord's Prayer on ceramic pottery. "No," he replied. But before I left he mentioned he would be interested in producing one--if I could provide the Hebrew text. I said I would email a Hebrew version on my return to Canada. Now more than a year later, it is time for me to keep my word.

The obvious answer to the question why no Hebrew versions of the Lord's Prayer are available for sale on ceramic tile is that most Hebrew speakers are not interested, and that the Lord's Prayer was preserved by Christians in Greek, Arabic and Syriac translation. Since Jesus is commonly thought to have taught exclusively in Aramaic, few scholars interested in the ipsissima verba of Jesus have tried to reconstruct a Hebrew version of the Lord's prayer. As I have already explained, my working assumption--based on recent scholarship as well as my experience growing up in Kenya, a country where bilingualism, at least, is the norm--is that Jesus could well have taught in Aramaic or Hebrew, and could probably converse in Greek. A Hebrew original of the Lord's prayer is not out of the question.

The problem is choosing the best Hebrew version. Because there is no centuries-old tradition of reciting the Lord's prayer in Hebrew, there is no standard liturgical version. The three Hebrew translations of the Lord's Prayer that I have consulted all differ, and I am, unfortunately, not qualified to arbitrate between them, much less to improve on them. Hence this post. Below the jump break, I present the English (KJV), Greek (NA27), and Hebrew versions of the Lord's prayer in parallel. I invite your feedback on which translation to recommend.


The three Hebrew translations of the New Testament that I consulted are as follows:

Del: Franz Delitzsch's Hebrew translation of the New Testament was first published in 1877. The text is in the public domain, and is available online here. I used the edition included in Bibleworks. More information on Delitzsch may be found here and here.

S-G: Isaac Salkinson's translation of the New Testament into Hebrew was completed by Louis Ginsberg in 1886. Both scholars were Jewish converts to Christianity (more information here and here). The text is in the public domain and available online here.


Comments and suggestions are welcome.

(The wikimedia commons photo at the beginning of the post is of a plaque in the Pater Noster Chapel in Jerusalem, which presumably dates from around 1920. I would recommend it as a model, but it presents the Lord's prayer as it appears in the textus receptus of Luke 11:2-4, not Matthew 6:9-13--so the text is somewhat different from the standard liturgical version. It is also independent from the Delitzsch and Salkinson-Ginsburg versions. More information on the chapel may be found here and here.)
Posted by d. miller at 9:00 AM

A reader in Israel points to this chanted recording of the Lord's prayer in Hebrew: http://www.catholic.co.il/index.php?option=com_content&view=article&id=451%3Aour-father-in-hebrew&catid=33%3Akehila-music&Itemid=45&lang=en

If the goal is retroverting the Greek into what Jesus might have prayed in Hebrew, I would favour Delitzsch's translation.

As a native Hebrew speaker I agree with Ken that hte Del' translation is closest, except for one sentence that has the grammar structured backwards.

RE: my previous comment: However, for modern Hebrew speakers, neither translation is 100% correct. To prepare The Lord's Prayer in Hebrew for my students, I drew on different sentences from the ones you offered so that it would sound grammatically correct. Also note that in some churches, the format used is "forgive us our tresspasses as we forgive those who tresspass against us" in which case your third translation works better.
Below is the translation I came up with from your translations, not as the one Jesus might have used, but one to use today. For an ancient translation, see Bruce Chilton's book "Rabbi Jesus."
אָבִינוּ שֶׁבַּשָׁמַיִם
יִתְקַדַּשׁ שִׁמְךָ
תָּבוֹא מַלְכוּתֶךָ
יֵעָשֶׂה רְצוֹנְךָ
כְּבַשָּׁמַיִם כֵּן בָּאָרֶץ
אֶת לֶחֶם חֻקֵּנוּ תֵּן לָנוּ הַיּוֹם
וּמְחַל־לָנוּ עַל־חֹבוֹתֵינוּ
כְּפִי שֶׁסּוֹלְחִים גַּם אֲנַחְנוּ לַחוֹטְאִים לָנוּ
וְאַל־תְּבִיאֵנוּ לִידֵי נִסָּיוֹן
כִּי אִם־תְּחַלְּצֵנוּ מִן־הָרָע
כִּי לְךָ הַמַּמְלָכָה וְהַגְּבוּרָה וְהַתִּפְאֶרֶת
לְעוֹלְמֵי עוֹלָמִים אָמֵן

Thanks for your input, Tsel. Which sentence in Del has the grammar structured backwards?