I am looking for a secondary text to complement Beverly Roberts Gaventa's excellent, readable Acts

commentary (Abingdon, 2003). The text needs to be well-written and accessible--something suited to a 300-level college course on the book of Acts--and should either introduce issues related to the study of Acts or stimulate reflection on the relevance of the book for Christians today. In the past, I have assigned Mark Allan Powell's What Are They Saying About Acts?

(Paulist, 1991), which is a fine introduction to scholarship on Acts, except that it needs to be retitled What Were They Saying about Acts 20 Years Ago? 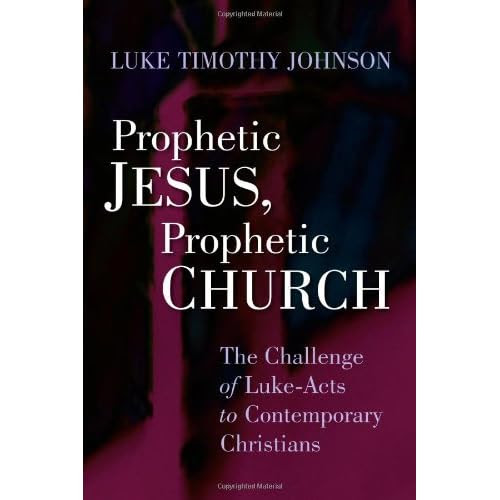 Luke Timothy Johnson's new Prophetic Jesus, Prophetic Church (Eerdmans, 2011), has lots of potential: It is organized around a major motif in Luke-Acts, Johnson does an excellent job connecting themes in Luke to Acts, and every chapter concludes with a "Challenge to the Contemporary Church." I may end up using it.

My main hesitation at this point--aside from the fact that Johnson interacts not at all with other scholars and that I disagree with his model of prophecy at some points--is that Johnson tends to set Jesus and the church over against Second Temple Judaism in a way that I find unhelpful. Take the following two quotes, for example:

(1) "Luke's description of Jesus' mission of embrace stands in starkest contrast to what might be considered two alternate prophetic programs within contemporary Judaism, each of which sought to secure a holy people, a restored people, on the basis of a strict observance of Torah and a sharp distinction between insiders and outsiders" (131).

Read on and it becomes clear that one of the main problems with the Essenes and Pharisees is their strict "observance of purity regulations." What, I wonder, was the problem with purity regulations, which had their origin in God's law?

I am tempted to use this quote as a negative illustration next time I teach "Jewish Backgrounds to Early Christianity":


(2) "Luke also shows Jesus reversing conventional standards in the way he pays attention to and invites into fellowship those who, in the ancient world, were regarded as little deserving of attention and of little worth on the scale of social prestige....[T]he progressive silencing of women as agents in the Hebrew Bible--see above all 1 and 2 Chronicles, Ezra, and Nehemiah--is continued in the earliest protorabbinic writings, in which women appear mainly as distractions from the male work of studying Torah." (137-8)

What does Johnson do with early Jewish books like Tobit, Judith, and Susanna?

To be sure, I am happy to assign textbooks with which I disagree. The problem is that I would not ordinarily take time to deal with these issues in a course on Acts, but I would not want to leave comments like these unaddressed.

So my question is this: What else would you recommend?
Posted by d. miller at 11:00 PM

I would recommend something like C. Kevin Rowe's, 'World Upside Down: Reading Acts in the Graeco-Roman Age' (Oxford, 2009) as a useful resource.

You may also want to consider:

Robert W. Wall and Anthony B. Robinson, 'Called to Be Church: The Book of Acts for a New Day' (Eerdmans, 2006).
F. Scott Spencer, 'Journeying through Acts: A Literary-Cultural Reading' (Baker Academic, 2004).

you say that he sets Jesus and the church over against "second temple judaism" but the quotes you provide do not seem so totalisitc to me. read as statements of Jesus and the church (a part of 2tj?) in contrast to elements within 2tj (or in the latter, dominate attitudes in the ancient world in general), what's the problem here? (other than perhaps that the lack of a wider perspective might fail to make points of critique in the emerging Jesus movement itself--think of its own ambivalent relationship with the position of women in the church)

Thanks for the recommendations, Paul. I think Rowe is great, but his use of untranslated Greek may be off-putting. I'm afraid I reacted negatively to Robinson and Wall the first time I looked at it. I'm also wondering about Graham Twelftree's People of the Spirit. I'll take another look at Rowe.

Nick: I am probably over-reacting and I may not have been paying enough attention to Luke-Acts on these issues. Off-hand, however, I am not sure that Luke is anti-purity, and a knee-jerk reaction against the purity system by Christians is something I try to teach my students not to do.

Thanks for your feedback on my recommendations.

I have just read your review of Wall's and Robinson's 'Called to be Church' and largely agree with you that Wall's chapters are much stronger.

Wall himself contributes on Acts in the New Interpreter's Bible. This gives him a chance to join up the exegesis and application himself. I haven't read any of his contribution myself, but if you have, do you feel he is more successful than the Wall/Robinson pairing?

Have you thought of using Darrell Bock's newly released 'A Theology of Luke and Acts: God’s Promised Program, Realized for All Nations' as a secondary text?

Paul: I've dabbled in Wall's commentary and like it, though I think Gaventa's is better (or just less idiosyncratic)--which may just mean that I'm not fully persuaded by Wall's canonical approach.

Thanks for the tip on Bock's theology. It's a bit big for a secondary text, I think, but bound to be a useful resource.