Stephen Westerholm on (not) reading the Bible like any other book 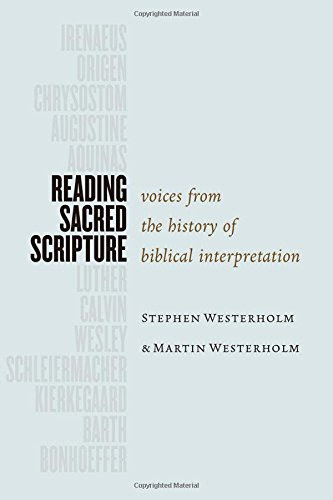 Stephen Westerholm's new book arrived in the mail a couple weeks ago, just in time for my Hermeneutics class discussion on the question, "Should we read the Bible like any other book?"

Stephen begins the volume with his own answer:


"Among the slogans that set the agenda for much modern study of the Bible, the prescription that it should be read 'like any other book' seems to me singularly unhelpful. We do not read Stiff Upper Lip, Jeeves or Have It Your Way, Charlie Brown the same way we read Hamlet or King Lear. Critique of Pure Reason and The House at Pooh Corner are both, I believe, eminently worth reading (though, in the one instance, I am relying on others' assurances), but they call for rather different approaches. Textbook of Medical Oncology requires yet another. To cut short a game becoming more fun by the minute, we may well ask: Like which other book are we supposed to read the Bible?

"To be sure, these and other books can all be read the same way if we approach each with a particular question in mind: How frequently does the author split infinitives, dangle participles, or quote Russian proverbs? Or, what do Romeo and Juliet, Concluding Unscientific Postscript, and Pippi Longstocking tell us about eating habits at the time of their composition? (This game, too, could be fun.) These are, I suppose, legitimate questions--doctoral dissertations have certainly been written on stranger topics--but they seem somewhat limiting. Classic literature--William Shakespeare, Søren Kierkegaard, Astrid Lindgren--has more to offer its readers; those open to experiencing the 'more' soon learn that different books make different demands on their readers.

"Unless, then, we are reading the Bible merely to carry out our own limiting agendas, the notion that it should be read 'like any other book' will be true only in the sense that the Bible, like any other book, calls for a particular kind of reading. Sensitive readers of the Bible, like sensitive readers of any text, will be alert to what is being asked of them, given the nature of the text before them." (pp. 1-2)

The first chapter takes soundings in New and Old Testaments to establish that the kind of reading the biblical writings call for is one that responds to the text as the word of God:


"[T]he New Testament documents were written by people who believed that ... their writings ... were vehicles by which the word of God, uniquely and climactically spoken through Jesus Christ, could now address those who never encountered him in the flesh." (23)

In the same way, the words of the prophets were collected because they transcended their historical contexts:


"The 'word of the Lord' was thus seen, not simply as divinely given knowledge-before-the-fact of some future event, but as a divine force that, once spoken by the prophet, was 'released' into the world where it might shape any number of events: as the word of God, it remained living and active and could not fail to have effect." (24).

This means that "the actual force of the requirement to read the Bible 'like any other book' is to deny--at the outset, and as a matter of principle--the Bible a reading in tune with its peculiar nature, to close one's ears to its call, and to preclude for oneself the possibility of experiencing the transformative impact that the biblical texts have always had within communities of faith" (27).

After a chapter on the formation of the Christian canon of Scripture, successive chapters explore the reading of Scripture by Irenaeus, Origen, Chrysostom, Augustine, Aquinas, Luther, Calvin, Wesley, Schleiermacher, Kierkegaard, Barth and Bonhoeffer. (The chapters on Schleiermacher and Barth were written by Stephen's son, Martin.)

Instead of trying to justify this choice of authors--why no women writers, for example--Stephen acknowledges frankly that his is not an exclusive canon:


"No dozen figures, however significant, can adequately represent the history of biblical interpretation or exhaust the approaches that have been taken to reading the sacred text; nor would any two informed readers think the same twelve figures most worthy of consideration. But selections have to be made, and no informed reader will doubt the importance of each of the interpreters treated here." (ix)

This post is more understanding to mere mortals (us) than most of yours.