One of t.'s favorite Turkey experiences was Turkish breakfast every morning. Turkish breakfast typically include a hard boiled egg, olives, sliced tomatoes, cucumbers and a selection of fruit, along with loads of fresh Turkish bread and a cup of tea (çay). Instead of a hard-boiled egg, the Apricot Hotel offers scrambled eggs; instead of fruit, freshly squeezed orange juice. We aren't in a position to evaluate the hotel's claim that they offer the best Turkish breakfast in Istanbul, but it was the best we had in Turkey! 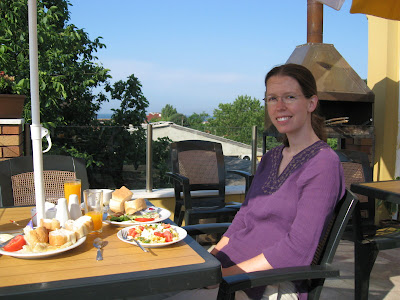 Breakfast is served on the Hotel's rooftop terrace overlooking the Mamara Sea: 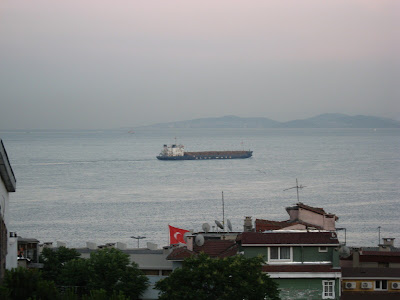 After enjoying our first Turkish breakfast, we struck out for Eminonu, where we had been instructed to catch a ferry across the Bosphorus to Uskudar, a suburb on the Asian side of the city. The ferry we were on looked a lot like the boat on the left side of the next picture: 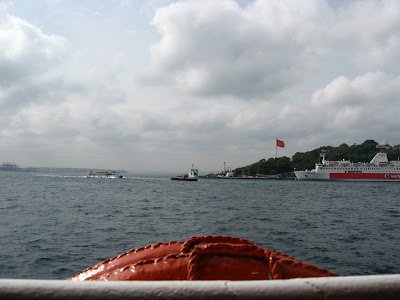 The old building in the next picture is Kiz Kulesi (Maiden's Tower). According to the Lonely Planet guide, "In ancient times a predecessor of the current 18th-century structure functioned as a tollbooth and defence point; the Bosphorus could be closed off by means of a chain stretching from here to Seraglio Point [the peninsula visible in the previous picture]." 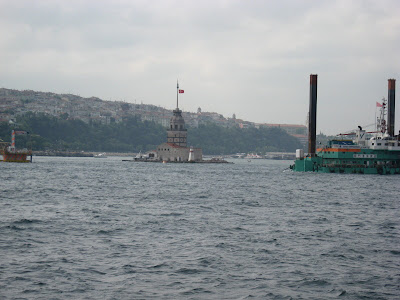 On our return to Istanbul we found part of the chain on display at the Istanbul Archeaological Museum: 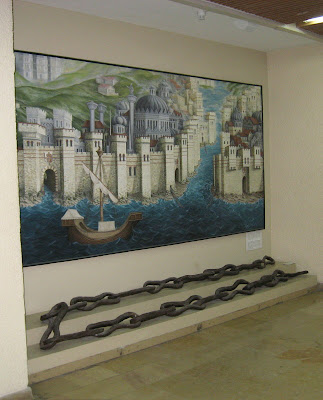 In Uskudar, we met up with our two traveling companions, and after a short wait, boarded our (very nice!) bus bound for Bergama. Bus travel appears to be a big (and competitive) industry in Turkey and the service on this trip was impressive: There were three staff people on the bus--a driver, a baggage manager, and a very friendly beverage and snack attendant who tried to teach me Turkish.

About 9 hours later we arrived in Bergama and, after some exploration, found a Pension (something like a B&B in North America) for the night. There's a story to tell about this particular pension--the chain-smoking elderly gentleman who greeted us when we arrived should have been a clue--but I'll leave that for another time.
Posted by d. miller at 8:37 PM