Pergumum came to prominence after the death of Alexander the Great as the capital of a region ruled by one of Alexander's successors. The kingdom reached the height of its power during the reign of Eumenes II (197-160 BC), who, with Roman help, defeated the Seleucid armies of Antiochus the Great and extended his realm across much of Western Turkey. This territory was lost less than 30 years later, when Eumenes' nephew, Attalus III, bequeathed the kingdom (but not the city) to Rome.

Though the Romans chose Ephesus rather than Pergamum as the capital of the province of Asia, Pergamum was still a major city during the first century A.D. Most of the populace apparently lived in the Lower City around the Asclepion and under the modern city of Bergama. We gladly rented a taxi for the 15 min drive up to the now uninhabited Upper City, where archaeologists have uncovered several temples, Hellenistic palaces and other monumental buildings: 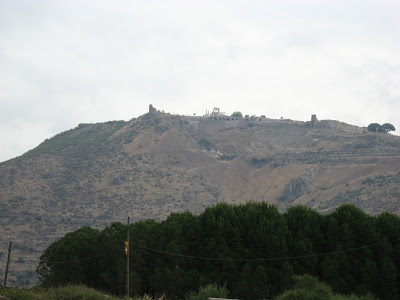 The site's mountain top location makes it confusing for beginners to navigate. 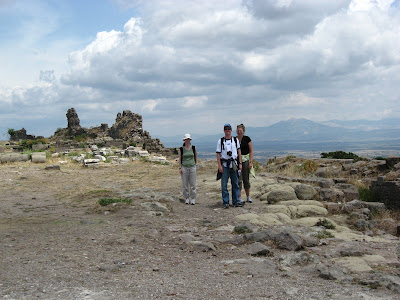 For one thing, the guide book map did not clearly indicate that the precinct of Athena (tree at top left of next picture) was considerably higher than the great altar to Zeus (two trees in the top center), or that the "Upper Agora" was lower still--at the bottom of the magnificent and steep 10,000 person theatre. 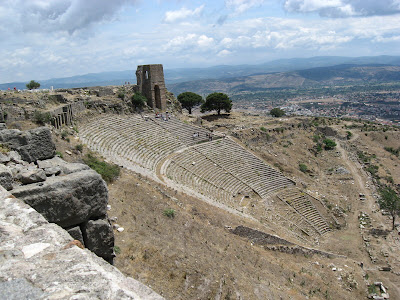 For another, to the untrained eye, the older remains such as Hellenistic Palace I, II, III, IV and V, look a lot like heaps of ruins. I was especially disappointed not to be able to identify with confidence the famous library of Eumenes II, that is said to have rivaled the library of Alexandria. I'm now pretty sure this was it, however: 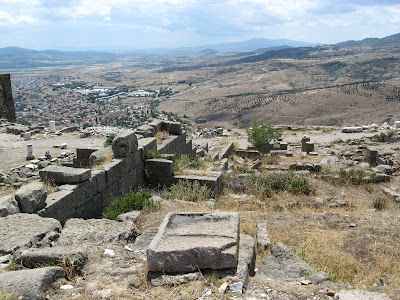 Tired of nondescript rubble? Take a look beyond the Hellenistic palaces off the northern edge of the acropolis, where there is a fabulous view of the recently dammed Caicus river: 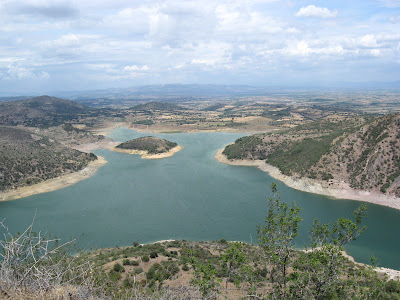