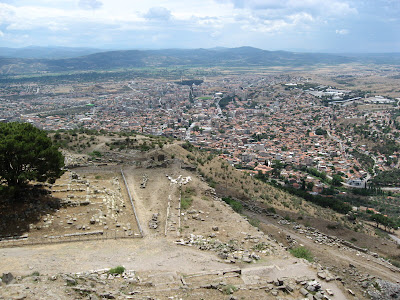 One of the most surprising things about Turkey was all the people (and their apartment buildings). My mental image of Bergama, derived from the tiny map in the Lonely Planet guide and my preoccupation with historical sites, was of a small flat town dwarfed by the soaring ruins of ancient Pergamum. Instead, the bus deposited us in the middle of a city of some 50,000 people, with ruins nowhere to be seen. The main ruins are, in fact, on a mountain to the northwest of the modern city, but it was dusk, we were surrounded by apartment buildings, I didn't know which direction to look, and our immediate concern was finding a place to stay for the night.

The picture of modern Bergama (above) was taken from the acropolis, but our first stop in the morning--after the rain let up--was the Asclepion. (Imagine a medical centre-temple-spa combination, with dream treatment thrown in for good measure.) The complex is located a couple kilometers up a hill to the west of the city (near the big white buildings near the right side of the first picture). Pergamum's Asclepion was a large complex with a theatre of its own: 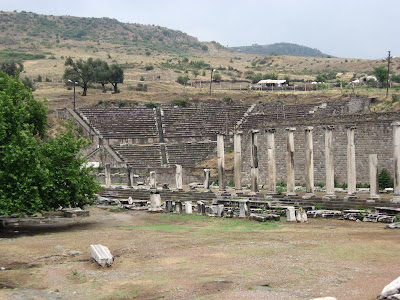 It is worth seeing now for its well-preserved ruins, which you can admire in relative tranquility: 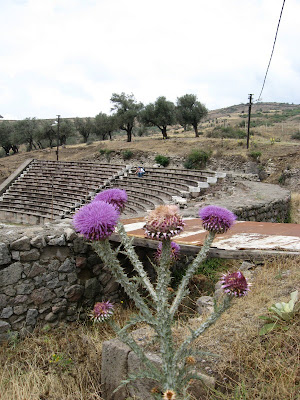 In antiquity, it was a popular centre, famous for its size and, eventually, because the physician Galen (AD 129- ca. 200) spent time there.

In addition to a theatre, it had a library with a gap between the walls, presumably (?) to protect against moisture damage. After posing for the next picture, t. looked down and noticed she was standing over a wet and bedraggled mama dog, lying between the walls, nursing her progeny. 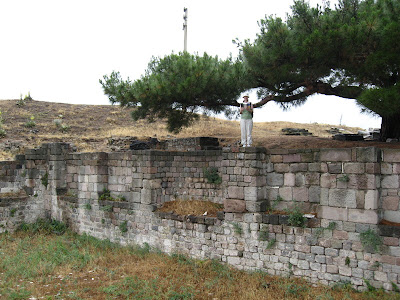 Archaeologists have uncovered remains of two circular buildings, one of which is thought to be a temple to Asclepius. The other, pictured below, is sometimes identified as the temple of Telesphorus, sometimes as the treatment centre, and sometimes--with greater caution--as "Circular Building." 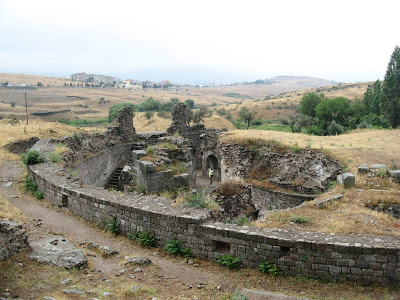 That the circular building functioned in some way as a treatment centre is indicated by the bath-like structures inside... 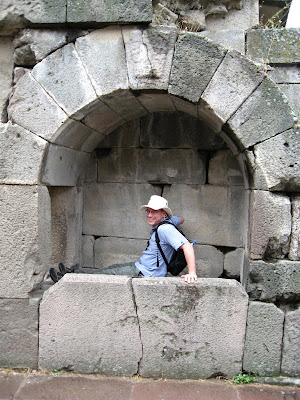 ...as well as a tunnel leading from the circular building to the courtyard of the Asclepion: 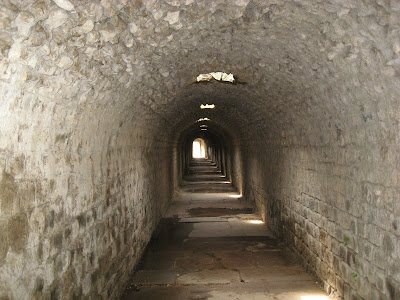