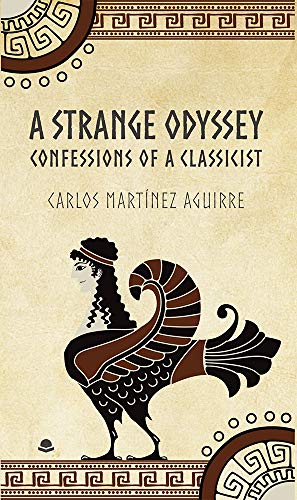 The English translation of Carlos Martínez Aguirre’s fascinating language-learning memoir, A Strange Odyssey: Confessions of a Classicist, is now out on Kindle. The book is a short narrative diagnosis of problems with traditional “dead” language pedagogy, a compelling demonstration that there is a viable alternative, a sobering description of what is required to develop competence in the “communicative method,” and a whirlwind introduction to some of the resources that are now available. A few excerpts:

From the introduction, on language-learning standards:

“For those outside the range of our subjects, it is normal to think that every Latin or Greek teacher has a mastery of their specialised languages, as would be expected of a German, English or Chinese teacher. That is, anyone not related to the world of Classical Languages would assume that a good teacher of Classical Studies of Secondary School level (and even more so at University level) would be able to speak Classical Latin or Greek with a measure of fluency, write correctly these languages, and of course, be able to comfortably read any text in the original language. However, this is very far from being the case. … [I]f any Russian teacher admitted that he couldn’t improvise the translation a page of Dostoyevsky in situ, nobody would take him seriously. I also see no reason why learning Russian should be easier to learn for any Spaniard than Classical Greek, and even less so Latin.”

On the traditional grammar-translation approach:


“[A]fter eight years of studying Latin and Greek (two in secondary school and six at university), I … not only remained incapable of being able to speak Latin or Greek ... but also of being able to write two lines correctly in these languages, or to translate a page without suffering like a condemned man at the gallows.”

On the possibility of true fluency:


“The most effective way I have discovered to show the cave dwellers [“of classical philology”] the error of their ways is by presenting them with some adolescents speaking Latin and Greek fluently, making comments and even jokes about the texts of the classic authors in that same language, and also explaining that they learnt Latin and Classical Greek without too much difficulty and with the same methodology as they learnt English or French.”


“At no point have I presumed that it is not possible to master Latin and Greek by the grammar and translation method. What I do attest to is that in my case that system was a failure and that many teachers of Classics … have shared with me of having experienced the same frustration and the feeling of being defrauded when they completed their studies. … [A]lthough all roads lead to Rome, it is evident that some are more tortuous than others.”

The book is self-published, and I’m afraid it shows. The English translation and proofing could have used another round of edits, and the structure and content of the memoir itself would benefit, I think, from additional revision. But for anyone interested in teaching or learning ancient languages, it is more than worth the $3.36 USD list price. Tolle lege!
Posted by d. miller at 2:42 PM