Seeing the Glory, Hearing the Son 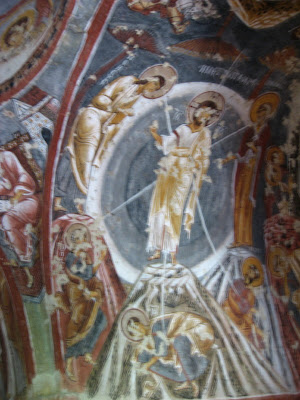 Most of my research time this month has been taken up with work on a paper that I am scheduled to give at Briercrest's Bible and Theology colloquium next Friday. The full title is "Seeing the Glory, Hearing the Son: The Function of the Wilderness Theophany Narratives in Luke 9:28-36."

The paper comes out of work I did this summer on connections between the transfiguration of Jesus and passages in Exodus that talk about Moses' and the Israelites' meetings with God at Mount Sinai. Most scholars who notice the connections--for example, the mountain, Jesus' transfigured appearance, glory (in Luke), an overshadowing cloud, a voice that speaks from the cloud, a response of fear--imagine the Gospel writers are setting up some sort of comparison between Moses and Jesus. I suggest up front that the web of connections is spun between events rather than people. Instead of dwelling only on similarities between Moses and Jesus, Luke (along with the other Gospel writers) wraps the entire transfiguration narrative in a complex of allusions to the wilderness theophany narratives that are associated, in the first place, with .

I plan to argue that memories of the covenant at Mount Sinai evoked by Luke in his transfiguration account contribute to his story of Jesus in at least two ways:
I'm looking forward to some good constructive feedback at the colloquium--if not already in the comments to this post. Hopefully, a revised version of the paper will eventually appear in print somewhere. But for now I need to finish the paper!

(The blurry picture at the top is of a painting of the transfiguration in one of Cappadocia's abandoned cave churches [now part of a popular open-air museum].)

Sounds good! Funny thing, today I am translating Acts 7 and it strikes me that the emphases there are much as you describe here. Take for instance verses 39-42ff, where the text emphasizes the Israelites' refusal to obey Moses, their desire to go back to Egypt, and the connection with sacrifices and temples (I'm not sure what to make of this last point; I could speculate but I'm too uncertain to do so here). Of course, the text makes the connection between Moses and Jesus explicit (v. 37), but it is a connection that is also implied with Joseph. The point of comparison is the response of the nation (or its representatives) to these characters, which would support your argument that the connection draws out the obedience that is necessary to render to Jesus. In both cases, the disobedience is related to Egypt (which figures prominetly in the whole sermom).

I knew I needed to draw in the description of the exodus and the Sinai revelation in Acts 7, but hadn't got there yet. You are quite right, I think, about the parallel emphasis in Acts 7 even though the verb "to hear" does not appear in the climactic verses toward the end of the chapter.

I'm not sure what to do about Luke and the Temple either. In Luke 1-2 the Temple is presented very positively. Acts 7 is, of course, a different story.

Your right, of course, about the verb "to hear" not appearing in the climactic verses.

But--and I just got out of bed to write this, having only thought of it now--the emphasis on hearing does occur. You are familiar, of course, with the many ways that Luke sets up Stephen as a sort of "post-type" of Christ. The narratives in Stephen's sermon are also clearly structured to resemble the story of Jesus. The pattern within the sermon is played out in the surface structure of the narrative. And here we do find an emphasis on hearing: Stephen calls them "uncircumcised in heart and ears" (51), they become enraged when they "hear" his indictment (54), and, finally, "they covered their ears" (57). So there is an emphasis in this narrative episode on (not) hearing the Son (i.e., Stephen)!

Or should I have stayed in bed?

Excellent observation! You can expect to be footnoted if I manage to work this in.

I would say Stephen is more the Son's representative, but the Son, standing at the right hand of God, does make an appearance in verse 56! The hearing motif may explain this unusual appearance of "son of man" outside the Gospels.