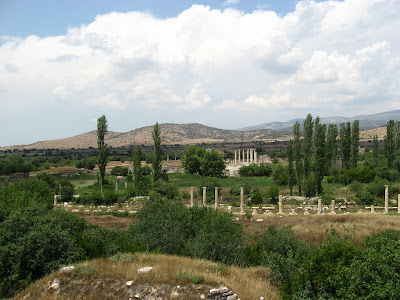 If you are looking for spectacular Roman ruins, Aphrodisias is a great place to visit. The Lonely Planet guide describes it as "one of Turkey's finest archaeological sites....Because Afrodisias is so isolated and so much of it still survives, here more than in most other places you can get a real sense of the grandeur and extent of the lost classical cities." (Troels Myrup on Iconoclasm rated Aphrodisias at #6 on his list of top ten archaeological sites on the Mediterranean.)

According to the 6th century Byzantine chronicler, Stephanus, Aphrodisias was first named "after Ninus, the legendary founder of the Assyrian Empire" (Blue Guide, 262). Ninus already featured in a post (here) on the Byzantine chronicler Cedrenus. I never expected him to come up again!

The city apparently began as a shrine to a mother-goddess (perhaps Ishtar), later identified with Aphrodite (hence the name Aphrodisias). The city's allegiance to Rome during unrest in Asia in the first century BCE paid off in subsequent and significant Roman support. The emperor Augustus granted the city independence from the province of Asia as an ally of Rome. "Under the empire Aphrodisias was an important intellectual and cultural centre. Its schools attracted students not only from Asia Minor but from other parts of the Roman Empire" (Blue Guide). I was especially interested in the Aphrodisian school of Architecture:

"Production on a large scale was facilitated by the existence of quarries of fine white marble two kilometres...away....Eclectic in style and highly proficient technically, the sculpture makes much use of polish and drill, and also of coloured marble for pictorial effect. Not only were the finished products widely exported, but Aphrodisian sculptors were much in demand in the cities of the eastern Mediterranean" (Oxford Classical Dictionary, 120; there are pictures and a fine discussion on the Iconoclasm blog here).

The Blue Guide assured us that "[m]ost of the finds are in a well-arranged museum at the site." Unfortunately, we learned that a major museum expansion project was underway, as a result of which the museum was closed. Fortunately, many fine sculptures, such as this sarcophagus, are scattered like lawn ornaments on the grounds around the museum: 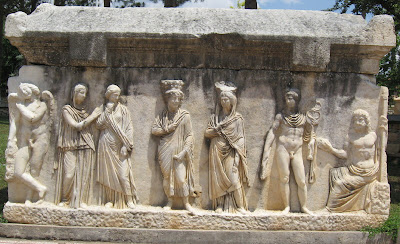 (For a taste of the museum holdings see the pictures on Phil Harland's site here.)

A large number of inscriptions have also been discovered at Aphrodisias, including the following warning against littering: "Whoever throws rubbish here shall incur the curse of the 318 fathers [of the Council of Nicaea]" (Blue Guide). More important, perhaps (!), is a 3rd century inscription that has been at the center of a debate whether or not there existed a recognized group of Gentile worshipers of the God of Israel known as "god-fearers" (cf. Acts 10:2; 13:26; 17:4). The relevant part of the inscription reads as follows:

"God our help. (Givers to) the soup kitchen. Below (are) listed the (members) of the dekany [association] of the (students) of the law, also known as those who (fervently) praise God, (who) erected, for the relief of suffering in the community, at their personal expense, (this) memorial (building)" (Cambridge History of Judaism 3.1009).

The Blue Guide advises to leave "at least three hours" for the ruins alone. With our driver, who gave us a generous 2.5 hours, waiting for us in the parking lot I felt rather too much pressure to see everything. Before we were done, we discovered a useful path designed for tourists (but not marked on the Blue Guide map) and realized that we should have followed it.

We ended up at the Martyrium (below) after trekking for 10-15 minutes through a plowed field around the outer edge of the site. (We thought we were following D&D along a short cut, but they apparently circled back to the tourist path.) Once we got to the Martyrium we had to stop and figure out what it was and how to get back to the main part of the site: 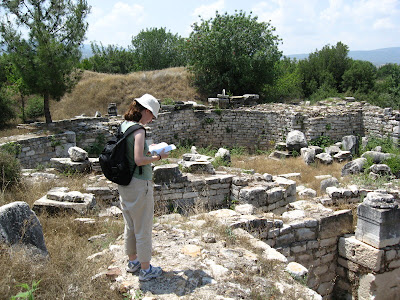 Notice the similarity with the Martyrium in Hierapolis.
Despite the detour, we still managed to see almost everything in Aphrodisias, and, thanks to a closed museum, we had time to stop for a picnic lunch near the Tetrapylon, which "appears to have marked the junction of a north-south street with, perhaps, a processional way to the temple" (Blue Guide): 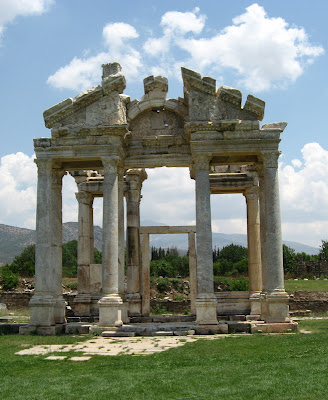 Click here for the Turkey Travelogue Index.
Posted by d. miller at 6:28 PM

Hi iam wanting to vist Aphrodisias next summer (july) i am going to be based in Bodrum how can i get to Aphrodisias from Bodrum is it a site on the tourist trail? will i be able to book it as a excursion? or can i get a dolmus there from a town etc I would appreciate any advice as looks amazing. Sadly i dont drive either Please email me any advice on how to get there i would really appreciate it Thxs Stevejb4u@aol.com.