Turkey Travelogue 8a - Aphrodisias, but not Laodicea or Colossae (June 11)

If we had been on a package tour of biblical sites, our itinerary would no doubt have included a brief stop in Laodicea, across the valley from Hierapolis. But our trusty guide books assured us there is really not much to see in this former home of the "lukewarm" church of Revelation (3:14-22). So instead of Laodicea, we decided to explore Aphrodisias, a Roman city known for its fine sculptures and extensive remains. After all, while a pilgrimage to a biblical site may be nice for "been-there-done-that" tourists, well-preserved ruins are more likely to leave a stronger impression of what life was really like. That, at least, is my excuse for returning from Turkey with only one picture of the region around Laodicea (taken on a cloudy day from Hierapolis): 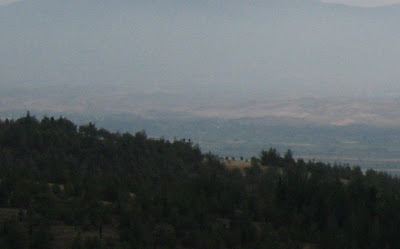 Another reason for choosing Aphrodisias over Laodicea is that it was supposed to be easier to get to, as pensions in Pamukkale often arrange trips to Aphrodisias for a reasonable price. In the end, the four of us were the only passengers, and our driver offered to stop in Laodicea. We declined, partly because I was hoping for a chance to visit the unexcavated mound of Colossae after we were finished with Aphrodisias. (This will be my third year in a row teaching the book of Colossians in Greek Exegesis I, and I thought it would be fun to show some pictures of the site, excavated or not.)

The trip to Aphrodisias, which must have taken over an hour along winding roads, through grain fields, villages, and mountain forests, was an excellent chance to sample rural Turkish life. I discovered after checking the Barrington Atlas that our route also followed closely an ancient road from Laodicea to Aphrodisias: 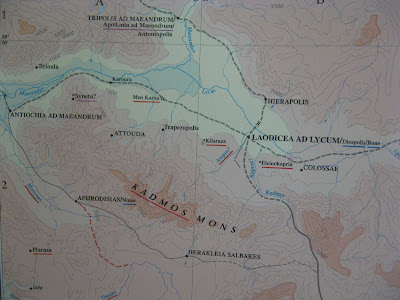 And no wonder--we had to circle a mountain to get there! Here's a satelite shot with modern roads highlighted: 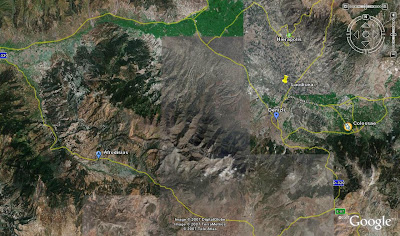 Unfortunately, when we raised the idea of stopping at the site of ancient Colossae after we were finished at Aphrodisias, our driver wanted another 40 YTL to take us there, which seemed exorbitant, especially as it was not entirely clear that he knew where it was we wanted to go. Once we made it back to the major city of Denizli, we were in no mood to set out through city traffic again.

Oh well, it is good to have a reason to go back!

Click here for the Turkey Travelogue Index.
Posted by d. miller at 9:11 PM