Update: See discussion of the mikveh "immersion pools" below. 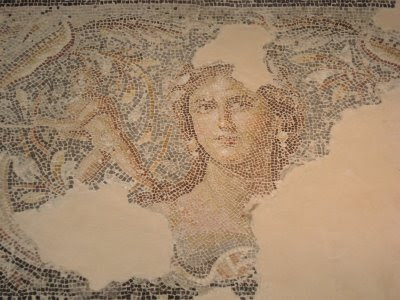 Zippori (Sepphoris) is best known today for the "Mona Lisa of the Galilee," part of an amazingly detailed mosaic that once lined the floor of a triclinium dining room in a 3rd CE mansion: 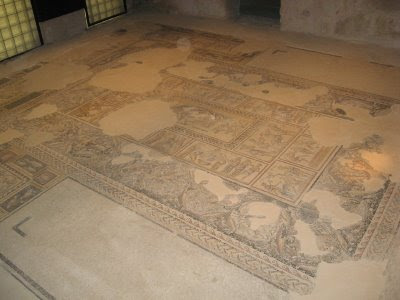 At one end of the mosaic is the "Mona Lisa": 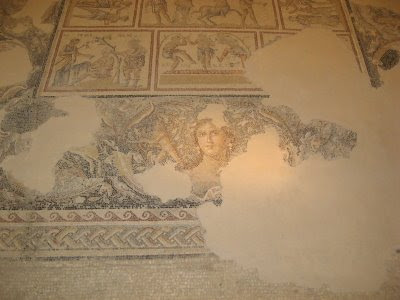 Near the other is the final scene from a drinking contest between Dionysus and Hercules: 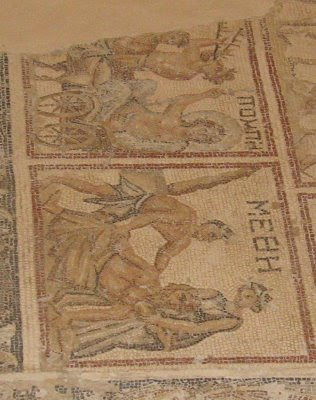 The beautiful mosaic associated with the worship of Dionysus is intriguing because Zippori was at this time a center of Jewish religious life: Rabbi Judah the Prince moved the rabbinic Sanhedrin to Zippori at the end of the 2nd century, and the Mishnah was codified here around 200 CE. 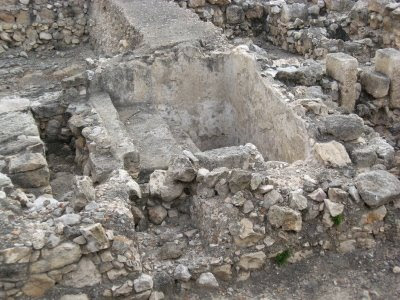 (A miqveh immersion pool,* a sign of Jewish presence in Zippori)

"The city . . . was considered by Theodoret the church history to be entirely Jewish in the reign of Valens (364-78)" (Murphy-O'Connor 468). No doubt the city had a mixed Jewish and pagan population in the 3rd century (a 2nd CE Roman temple was recently discovered), but it is instructive to imagine the rabbis carry on their work in such a cosmopolitan setting.

*Update: That is, if the archaeologists are right in identifying the pools as immersion pools (miqva'ot). Consider Seth Schwartz in his excellent book, Imperialism and Jewish Society: 200 B.C.E. to 640 C.E.

[O]ver twenty small bathtubs were discovered in a residential district of the city, which excavators have identified, with what justification is unclear, as miqva'ot. If this is correct, then the population of Sepphoris in approximately the third century was either radically diverse, consisting of a mixture of paganizers and the purity-obsessed or mind-bogglingly eclectic in their Jewish observance. While both options seem probable on other grounds, it is unclear why the bathtubs should not be considered simply bathtubs. (144)

Also interesting, giving the rabbinic prohibition of images, is the 5th century synagogue that we didn't take time to see: It has a colourful mosaic that contains the signs of the zodiac and depicts biblical figures such as Abraham, Isaac, and Aaron (see the pictures at the bottom of this page). 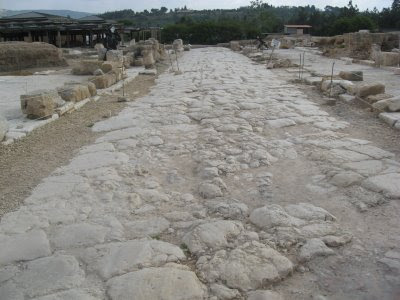 Sepphoris was made the capital of Galilee when the Romans took over in the first century BCE. It was destroyed by the Romans after a revolt in connection with Herod the Great's death (4 BCE). Herod Antipas, Herod the Great's son and successor in Galilee, rebuilt Sepphoris and made it his capital. Murphy-O'Connor speuclates that this "probably drew the artisan Joseph and his family to settle in nearby Nazareth (Matt. 2: 21-3); the project would provide work for many years" (468).

There is much more to see in Zippori--the national park pamphlet recommends 3-4 hours to view the whole 16 square kilometer site--but we were short on time, I was tired, and took few pictures.

If you want more, check out Bibleplaces.com for always excellent photos, a few of which are free to view; the Wikipedia article, and especially Biblewalks.com.