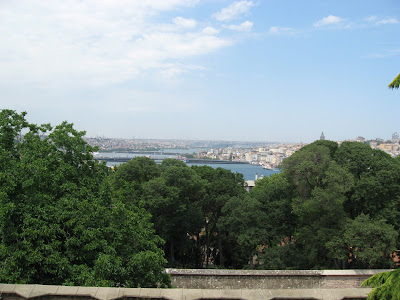 We reserved a final day in Istanbul to see more of the city. First on our list was Topkapi palace, home to the Ottoman sultans from 1453 until 1839. The guide books play to their reader's Orientalist assumptions, highlighting all that was exotic and extravagant in Ottoman rule. The palace, they say, is a tourist must see. Evidently the tourists believe them, because the site was overrun. For the record, the guidebooks have a point--especially if you admire intricate tile decorations: 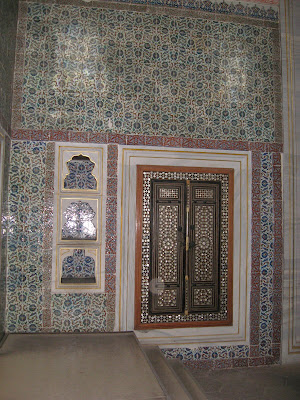 I didn't take a lot of pictures as there were not many Greco-Roman antiquities to be seen, but as we wandered through the royal Harem, which was restored to look like it did in the 17th century, I couldn't help being struck by similarities to court life under king Herod the Great. I overheard a guide commenting that the Ottoman's ruled from between their belly and their knees. Only too happy to illustrate, the guidebooks tell of "Selim the Sot, who drowned in the bath after drinking too much champagne" (Lonely Guide), of Sultan Murat III (1574-95) who sired 326 children, of younger princes who spent their lives in the Harem "where nothing was denied them but their freedom", and of one such prince, Crazy Ibrahim, who was raised in the Harem by powerful women and eunuchs, and eventually elevated to the throne. Crazy Ibrahim, so the story goes, drowned all 280 of his concubines in response to a "slight to his honour" (Blue Guide).

Book 17 of Josephus's Jewish Antiquities, which I was reading at the time, tells of the court intrigue among Herod the Great's rather extensive family. (He had 10 wives.) Given to jealousy and paranoia, Herod murdered his beloved wife Mariamme. He eventually executed her two sons, Alexander and Aristobulus, along with another son, Antipater. Shortly before his own death, Herod had the leading men of Judaea imprisoned in the hippodrome, and instructed his sister Salome to have them executed when he died so that "he would...have a grand funeral such as no other king had ever had, and there would be mourning throughout the entire nation, which would be lamenting from its very soul instead of mocking and ridiculing him" (Ant. 17.177). Fortunately, his sister didn't follow his instructions. 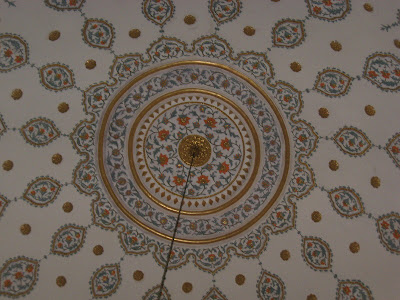 I was also impressed by the royal kitchens, where "cooks prepared food for more than 4000 people each day" (Blue Guide). Western visitors at the Sultan's court were impressed too, when they were invited to banquets where 40 different kinds of meat were served.

Stunning. Extravagant...And apparently typical, though you won't find this in the guide books: t. pointed out that what I reacted to was actually typical of the contemporary ruling courts of Europe. The Ottoman's were different in that they were more successful in their opulence. Unlike their Western European counterparts, they also believed in bathing regularly. (It helps to have an early modernist as your traveling companion.) 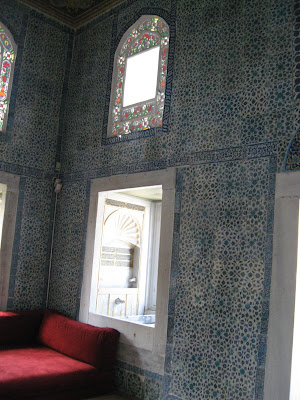 Just outside the Harem is the Tower of Justice, which adjoins the Ministry of Truth: 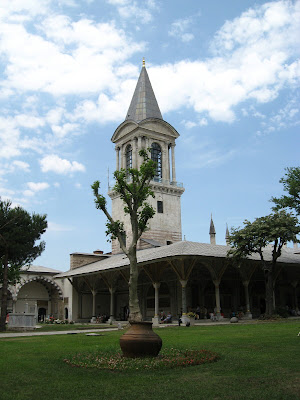