The Obedience of Faith in Luke-Acts

John Hobbins at Ancient Hebrew Poetry posted a fascinating excerpt from the Babylonian Talmud this morning in which Rabbi Simlai works through a series of passages from the Psalms and prophets that R. Simlai says sum up the 613 commandments of Torah in fewer words. R. Simlai finally settles on Habakkuk 2:4: "The righteous person will live by his faithfulness." (Hobbins's translation: "And the just person will live steady as she goes.")

When it is mapped onto Luke's covenant language (including explicit statements as well as indirect allusions), the result is something like this: 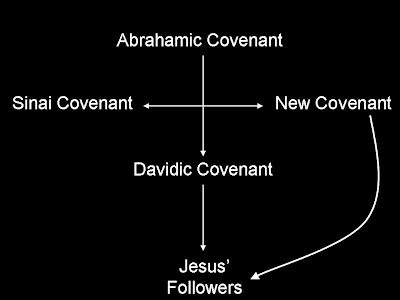 The arrows linking the Abrahamic and Davidic covenants to Jesus' followers show that, for Luke, the unconditional promises to Abraham and David are inherited by the church in the New Covenant. As scholars like to exclude it from Luke's understanding of "covenant," the Sinai Covenant with its covenant stipulations stands off on its own in the diagram. It is, however, contrasted with, and ultimately replaced by, the New Covenant.

As I suggested in an earlier post, I suspect Luke included the Sinai covenant as part and parcel of the covenants with Abraham and David. But however much we see the Sinai covenant as designed to achieve the same goal as the Abrahamic covenant (i.e., worship; cf. Luke 1:74; Acts 7:17), I now think something like the diagram must be correct. At Sinai, the people were instructed to hear the law as mediated by Moses. In Acts, the proper response to hearing the message about the risen Jesus is faith (e.g., Acts 4:4). The interpretation of the parable of the sower in Luke 8:11-15, which--unlike Mark and Matthew--emphasizes belief/faith, confirms that Luke's typical way of talking about the process of becoming a Christ-follower includes "faith."

The problem comes when one takes a flying leap off the Mount of Transfiguration into Post-Pentecost Acts, skipping over the immediate context with its emphasis on carrying one's cross, losing one's life, and following Jesus. Once again, faith, for Luke, cannot be separated from fidelity to Jesus, which issues in a life of faithful obedience.

In the end this is not so different from Paul, whose comment about the "obedience of faith" in Romans 1:5 (cf. 15:18) indicates that the obedience God calls for is faith and that this faith will be marked by obedience.
Posted by d. miller at 1:55 AM