Turkey Travelogue 6a - Paul the Traveler

Of all our Turkey experiences, our attempt at the Priene-Miletus-Didyma tour contributed most to our understanding of, and empathy for, the apostle Paul.

The Lonely Planet guide advises an early start if one wishes to see all three sites by public transport; it also warns the trip will likely involve considerable backtracking, and waiting for rides in the hot sun. We determined to minimize wait times when possible by letting the availability of dolmuşes determine our itinerary.

Our day began early enough, but to fully enjoy a Turkish breakfast (and to consume the full basket of bread provided) requires time. 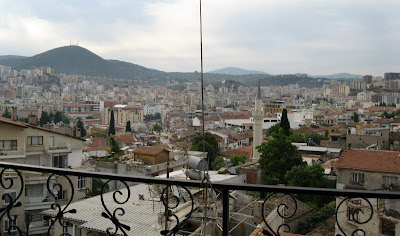 I'm pretty sure it was close to 10 a.m. by the time we arrived at the dolmuş stop, and another 15 minutes before our white Japanese mini-van set out for Söke, a regional market town and dolmuş transport hub. Söke is only 20 km away from Kuşadasi, but it must have been close to half an hour before we crossed the intervening mountain range and stopped at the Söke bus station (click on the map to see a larger picture): 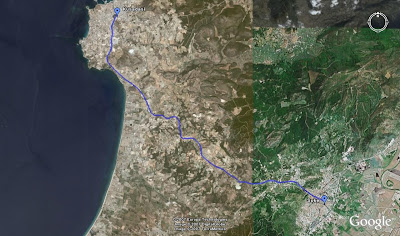 Fortunately, we didn't have to wait long for a Dolmuş bound for Priene, another 17 km (about 20 min) away: 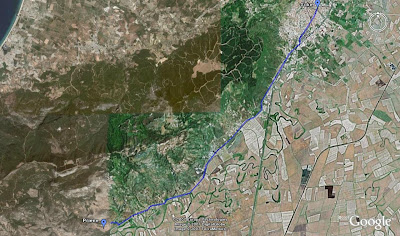 After viewing Priene we managed to flag down an empty dolmuş headed back to Söke. We decided to tackle Didyma next since it was farthest away, and because bus service to and from Miletus was reputedly less reliable. An hour after setting out from Söke, we arrived in Didyma: 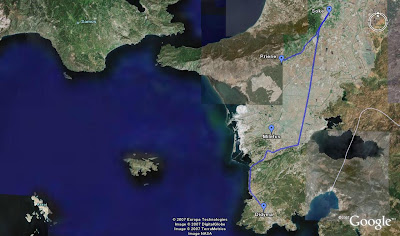 By the time we caught a ride back to Söke we were too tired and it was too late to make yet another trip to Miletus--the only one of the sites actually mentioned in the New Testament.

We made it back to Kuşadasi overheated and rather jostled, but in time for our dinner appointment with D&D, who had spent the day sailing on the Aegean. t., unfortunately, had lost her appetite.

If four hours on a mini-bus was bad enough, what was it like for Paul, who traveled this area on foot?
Click here for the Turkey Travelogue Index.
Posted by d. miller at 8:21 PM