The city of Hierapolis was most likely founded by the Seleucids during the 3rd century BCE, before being taken over by the Attalid kings of Pergamum (2nd century BCE), and then by Rome (129 BCE), and finally by the Selçuk Turks in the late 12th century CE. All the surviving ruins are Roman, perhaps because the original city was destroyed by the same earthquake that destroyed nearby Laodicea and (most likely) Colossae in 60 (or 64) CE. Hierapolis was home to Epictetus, a famous stoic philosopher; Papias, whose five volumes on the Interpretations of the Sayings of the Lord we all wish had survived, was bishop here in the early 2nd century.

The city had the usual assortment of monumental Roman buildings, including a 15,000 person theatre (our 5th) which is dated to the 2nd century CE: 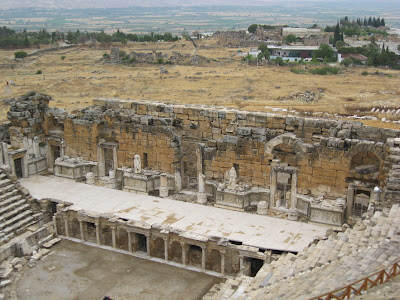 (This theatre was nice because archaeologists left the stage pieces in place instead of moving them to nearby or faraway museums. It also affords a great view of the rest of the site and, on good days, of the Lycus river valley.)

There is also the 3rd CE remains of a temple to Apollo, the city's patron diety. The next picture is what we thought must be the temple after our experience viewing the massive temple of Apollo in Didyma: 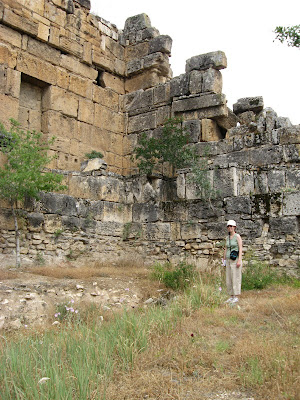 After several minutes close inspection, we realized it was just a monumental fountain. The real temple seems rather small by comparison:

We were especially interested in the temple because the Blue Guide reports that "During the excavation, work was impeded considerably by noxious gas which seeped from the foundations. It was found that this gas originated in the Plutonium...a sanctuary dedicated to Pluto, the god of the underworld." The poisonous gas emanating from the Plutonium was well-known in antiquity. In the late 2nd or early 3rd century the Roman historian, Dio Cassius, "tested its lethal properties on birds" and "remarked also on the apparent immunity enjoyed by eunuchs" (Blue Guide 277).

After what the guide books had to say, I imagined the Plutonium would be quite the tourist attraction, but the site is now overgrown with grass and is not exactly well-marked. The Lonely Guide comments that the gas "is still deadly poisonous. Before the grate was installed there were several fatalities among those with more curiosity than sense." Suitably warned, I took this picture using my camera's telephoto lens. 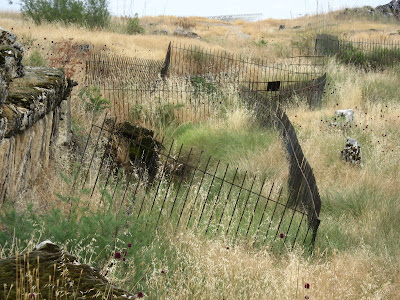 Another highlight of our trek through Hierapolis is the 5th CE Martyrium of St. Philip, up the hill to the north of the ruined city, whose octagonal design is much more striking in person than it is in the next picture: 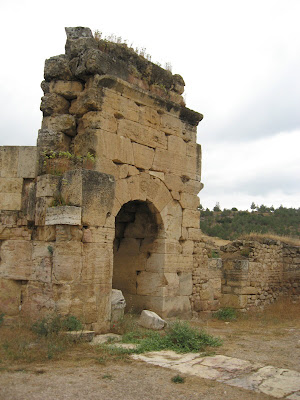 The Chi-Rho in the top right corner of this blog was on one of the Martyrium's arches. Click on the next picture for a description in Turkish, Italian or English: 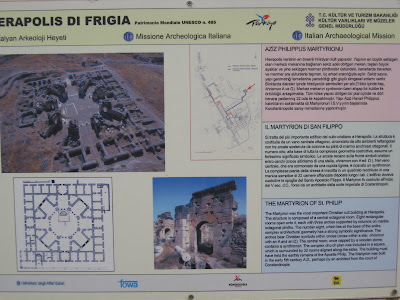 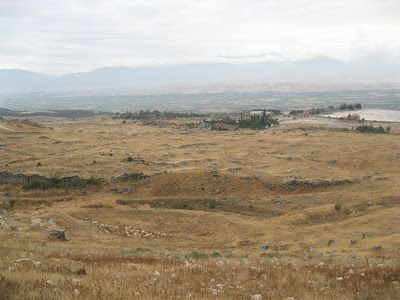 Just before we left for Turkey I finished an article in the Journal of Jewish Studies by Philip Harland (available here) about what we can learn about the Jews of Hierapolis from the many inscriptions discovered in the city's extensive necropolis. Since we made it to Hierapolis, I thought it would be fun to find the tomb of Glykon featured in the article--a scavenger hunt, if you will. Unfortunately, I forgot to write down the description of the tomb's location and I was entirely unprepared for the sheer number of sarcophagi. Once you pass through the monumental arch of Domitian... 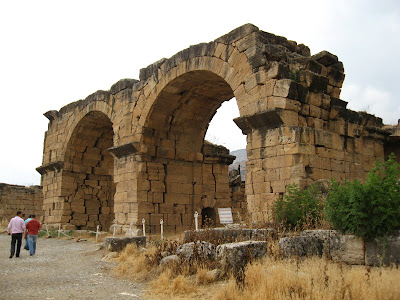 the city's north necropolis extends for another 2 km on both sides of the street. t. wisely decided to wait at the entrance to one of the tombs... 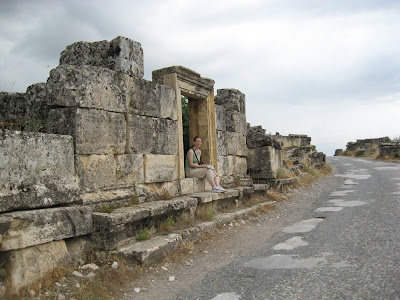 while I continued on my quest for Glykon or any other of the 23/360 published Jewish tomb inscriptions: 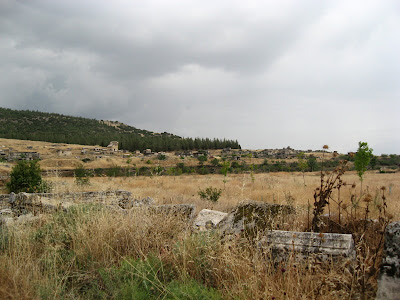 No luck. By the time we arrived back at the main part of the city the "excellent" museum had closed for the afternoon. Back in Canada I discovered the tomb is actually located by the Martyrium of St. Philip.

Click here for the Turkey Travelogue Index.
Posted by d. miller at 11:45 PM