Turkey Travelogue 6b - From Miletus to Ephesus

I suspect another reason why we didn't make the extra effort to stop in Miletus was because of the Blue Guide's less than ecstatic description:

Miletus is not one of the most attractive sites in Turkey. During late autumn, winter, and early spring much of the area is a quaking morass. In summer this becomes a drab, brown wilderness covered with low thorny scrub. A sense of profound melancholy broods over the ancient city, a feeling of abandonment and decay which is accentuated by the sight of an occasional tall, isolated clump of reeds or the jagged stump of a ruined building.

My guess is that the author let his high-falutin' prose get away on him. The glimpse we caught of the ruins on our return from Didyma certainly looked interesting, and the Lonely Guide claims that the 15,000 seat theatre in Miletus is "still in good condition and exciting to explore."

The ruins of Miletus are now 14.5 km (9 miles) from the Aegean sea, thanks to the silting effect of the Meander river (the blue dot is Miletus): 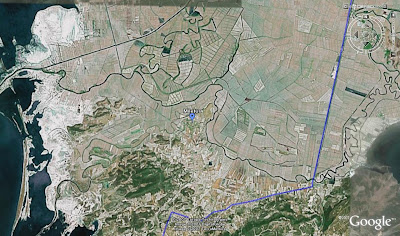 But ancient Miletus was once an important harbour: 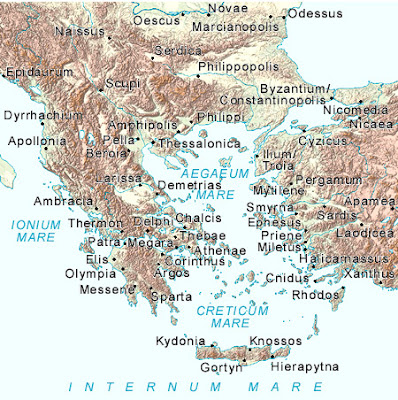 Although there is no direct evidence that the bumpy drive between Kuşadasi, Priene and Didyma followed in Paul's footsteps, we were reminded of Luke's earlier travelogue chronicling Paul's voyage to Jerusalem at the end of his third missionary journey:

15 The next day we set sail from there and arrived off Kios. The day after that we crossed over to Samos, and on the following day arrived at Miletus. 16 Paul had decided to sail past Ephesus to avoid spending time in the province of Asia, for he was in a hurry to reach Jerusalem, if possible, by the day of Pentecost. 17 From Miletus, Paul sent to Ephesus for the elders of the church. (Acts 20:15-17 NIV)

Earlier, I wondered how the Ephesian elders got to Miletus, and imagined an unlikely scenario involving traffic delays due to dredging efforts in the Ephesian harbour. Despite spending far too much time looking for information on the topic, I still have no idea how much it would cost for a group of "elders" to travel by boat from Ephesus to Miletus. Judging from the itinerary in Acts 20:15, it would have taken about two days to travel by sea from Ephesus to Miletus.

But let's suppose it was more economical for a group of people to travel by land. When you glance at a Bible atlas, the trip does not seem long, and it is easy to overlook the mountain range along the Dilek Peninsula that would have forced travelers to jut inland to the pass near modern-day Söke: 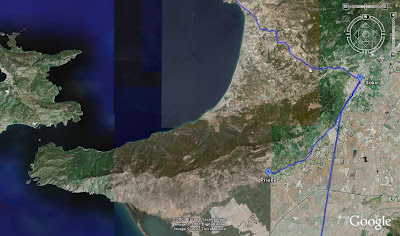 (The island to the left of the picture is Samos mentioned in Acts 20:15.)

Based on our own experience traveling by Dolmuş, I expect it would take at least an hour to drive by car from Ephesus to Miletus, several days (4 or 5??) to travel on foot: 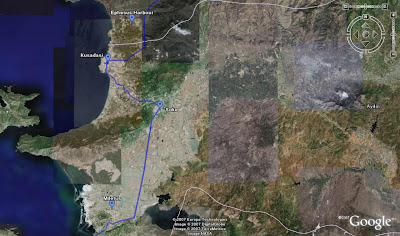 Luke, of course, was more interested in reporting what Paul had to say to the Ephesian elders "when they came to him", but notice the "foot" imagery:

18 "You yourselves know how I lived among you the entire time from the first day that I set foot in Asia, 19 serving the Lord with all humility and with tears, enduring the trials that came to me through the plots of the Jews. 20 I did not shrink from doing anything helpful, proclaiming the message to you and teaching you publicly and from house to house, 21 as I testified to both Jews and Greeks about repentance toward God and faith toward our Lord Jesus. 22 And now, as a captive to the Spirit, I am on my way to Jerusalem, not knowing what will happen to me there, 23 except that the Holy Spirit testifies to me in every city that imprisonment and persecutions are waiting for me. 24 But I do not count my life of any value to myself, if only I may finish my course and the ministry that I received from the Lord Jesus, to testify to the good news of God's grace." (Acts 20:18-24 NRSV)

Click here for the Turkey Travelogue Index.
Posted by d. miller at 12:30 PM