Click here for the Turkey Travelogue Index.
If you should wander from the theatre... 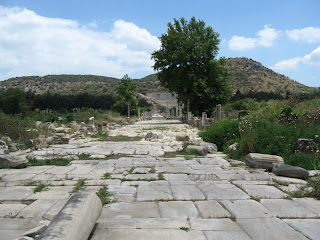 ...down the long length of the Arcadian way, 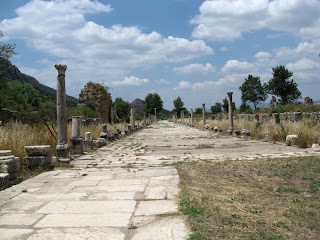 you will find yourself staring into a shimmering hedge of dense green undergrowth. Viewed from above, the undergrowth takes the shape of the harbour of ancient Ephesus: 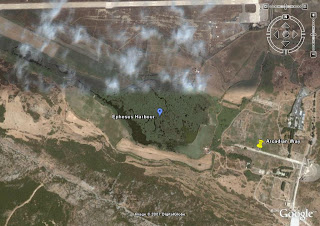 (The blue marker indicates the harbour, the yellow marker the Arcadian way.)

Ephesus was originally built at the mouth of the Caÿster river, on the coast of the Aegean sea, but the river kept silting up. According to the Lonely Planet guide, Attalus II of Pergamum (160-138 BCE) rebuilt the harbour, a proconsul of Nero dredged it (ca. 54-68 CE), and the Emperor Hadrian (117-138 CE) attempted to divert the river itself, but to no avail. Today the river is a tiny stream and the sea, a good 5 kilometers away: 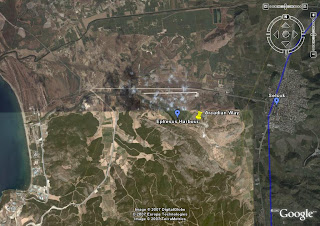 So what was the harbour like in Paul's day?

According to Acts 18:19, Paul stopped in Ephesus at the end of his second missionary journey en route from Corinth to Jerusalem. At the end of his third missionary journey, however, he landed at the "nearby" port of Miletus and sent a message requesting the Ephesian elders to meet him in Miletus "so that he would not have to spend time in Asia; for he was hurrying to be in Jerusalem, if possible, on the day of Pentecost" (Acts 20:16 NASB). Presumably he was concerned about being held up by the church in Ephesus, although I am tempted to imagine traffic delays because of construction in the Ephesian harbour early in Nero's reign.