Turkey Travelogue 5e - The Great Artemis of the Ephesians

Click here for the Turkey Travelogue Index.
After an exhausting trek up, down and around Ephesus, we set out along a nicely paved, Mulberry fruit-stained path to the modern city of Selçuk. About 45 minutes later, on the outskirts of the city, we stopped to see the ruins of the great Temple of Artemis: 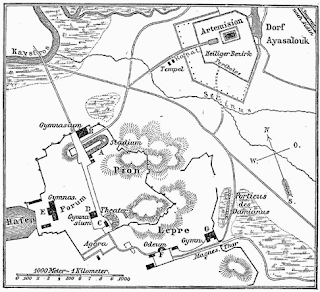 (Click here for a bigger map.)
Once one of the seven wonders of the world, all that now remains of the Artemision is a couple pillars (the one on the left had a stork's nest on top), and the foundation of a Hellenistic altar: 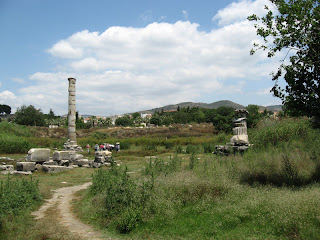 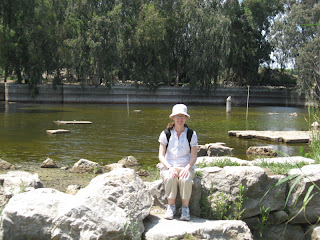 According to Acts 19, Paul ran into trouble with one Demetrius, a tourist salesman silversmith "who made silver shrines of Artemis." Gathering together his fellow artisans, Demetrius declared: "You also see and hear that not only in Ephesus but in almost the whole of Asia this Paul has persuaded and drawn away a considerable number of people by saying that gods made with hands are not gods. And there is danger not only that this trade of ours may come into disrepute but also that the temple of the great goddess Artemis will be scorned, and she will be deprived of her majesty that brought all Asia and the world to worship her" (Acts 19:26-27 NRSV).

Two statues of Artemis were discovered in the Pyrtaneion of nearby Ephesus, the first is large (2.92m high) and dates from the first century A.D.: 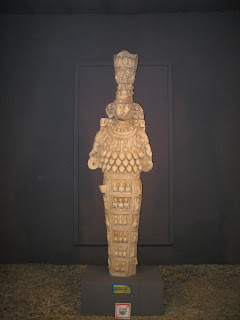 The second is much smaller, and dates from the second century A.D.: 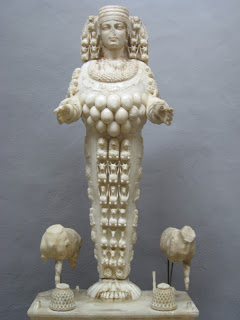 Both statues are now in the air-conditioned (!) Archaeological Museum in Selçuk, where there is also a reconstruction of the Temple: 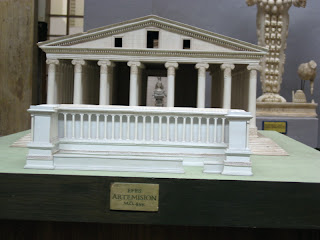 Outside the museum you can still purchase statues of Artemis, though we didn't notice any silver shrines.

Suggestions about the round objects on her chest range from "bulls' testicles" (Blue Guide) to "egg-like breasts" (Lonely Planet Guide). Scholars believe that Artemis of the Ephesians was originally worshipped as Cybele, the Anatolian mother goddess. She reminded us of Ungit, the (imaginary) goddess in C.S. Lewis's Till We Have Faces. If you've read the book, you'll know what we mean. Greco-Roman religion was not the tame and neutered rational religion one might expect from studying "classics", where the literature of Greek mythology is kept separate from imagining the practice of daily life. N.B. This comment is directed at the "classics" not the Classics. No offense intended toward the latter.
Posted by d. miller at 7:41 AM

The crossed out "tourist salesman" comment just brought the Scriptures to light in a whole new way.....