When the Aya Sofya was transformed into a mosque after the Ottoman conquest in 1453, most of its wall decorations were plastered over and replaced by geometric patterns. (Thankfully, the building itself was not destroyed.) Several of the Byzantine mosaics have been restored since its conversion into a museum. The "wise men" on either side of this 12th century madonna and child are the emperor "John II Commenus (1118-43) and his wife Eirene." John, it seems, was a good emperor (Blue Guide): 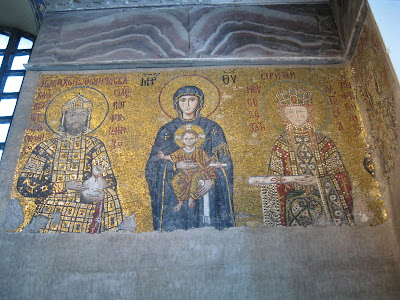 We know this mosaic was completed in the 11th century because it depicts the Empress Zoe and her third husband, Constantine IX who reigned between 1042-55 CE: 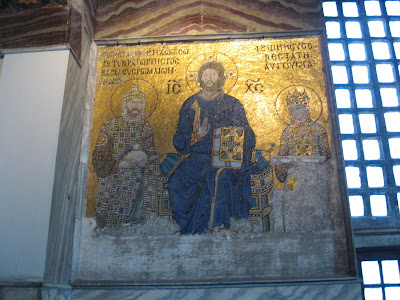 The mosaic was actually completed earlier during the lifetime of Zoe's first husband. It underwent repeated head upgrades when she remarried (in dubious circumstances).

Finally, this is a beautiful 13th century mosaic of the "Deisis"--Christ at the judgement with Mary petitioning for the world's salvation on his right, and John the Baptist on his left: 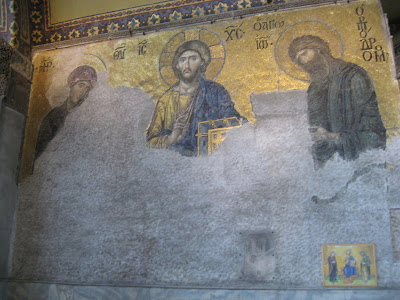 Click here for the Turkey Travelogue Index.
Posted by d. miller at 9:44 PM