Turkey Travelogue 11c - What does Istanbul have to do with Jerusalem?

From the Aya Sofya, we wandered downhill in the general direction of the Istanbul Archaeological Museum, hoping to find some cheap eats along the way. We eventually gave up, fortified ourselves with the remaining snacks in our backpacks, and ventured into the main museum building. Hungry and exhausted as we were from the previous night's journey, we still managed to stay until the staff asked us to leave.

The prize display in the museum is a collection of magnificent sarcophagi "excavated" from Sidon by the great Ottoman archaeologist and tomb raider, Osman Hamdi Bey. (I note that Hamdi Bey was by all accounts a model archaeologist of the 19th century variety, and that Sidon was part of the Ottoman empire at the time; his Western European contemporaries had the unfortunate habit of retrieving artifacts from outside their respective empires.) There are some excellent pictures of the Sidon sarcophagi, as well as artifacts in the rest of the museum here. Update (28 June 2009): There is a nice article about the "Alexander" sarcophagus here.

The bear (?) in this picture is part of a hunting scene on one of the less prominent sarcophagi: 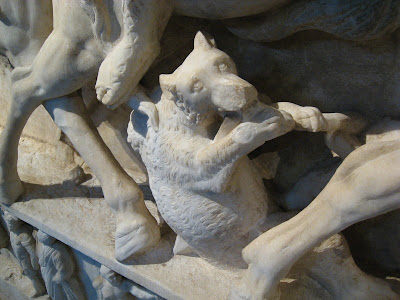 Though there was still too much for us to absorb in one visit, large sections of the main building were undergoing needed renovations. This was a relief in a way, because it put limits on my compulsion to see everything. Still, I took a few pictures of items that seemed more relevant to my research interests. This is a fine statue of the emperor Hadrian: 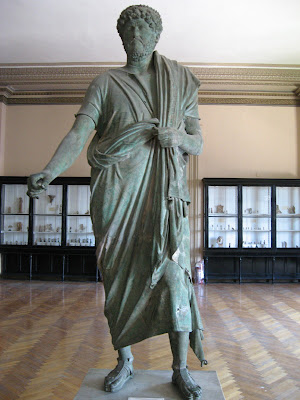 And here's a bust of the emperor Tiberius: 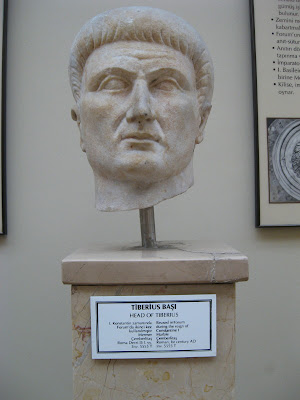 I was disappointed not to see signs that they were installing air-conditioners. Even with open windows the air was hot, humid and stuffy--especially on the third floor, where we noticed several displays related to Syria-Palestine...

Click here for the Turkey Travelogue Index.
Posted by d. miller at 7:45 AM