Note: I will keep adding to the bottom of this post links to the ongoing saga of Israel's request for the return of the Siloam inscription.

Sometimes, it is more exciting not to read the guide books before visiting a site--or at least that's the excuse I make for not doing my research in advance. This time, however, the guide books would not have prepared me for what we stumbled upon as we made our way through the exhibits on the tomb-like third floor of the Istanbul Archaeological Museum. Neither the Blue Guide nor the Lonely Planet Guide, nor the brochure we picked up at the front gate mention what in Israel would be considered a national treasure--the Siloam inscription: 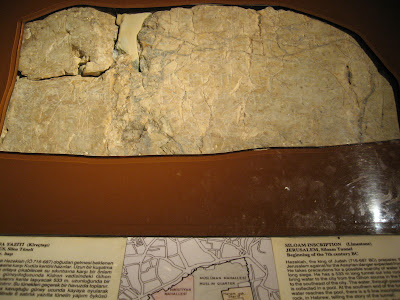 The Siloam inscription was discovered in 1880 by a youth who was wading up from the pool of Siloam in Jerusalem toward the Gihon spring. The six line inscription is in the Paleo-Hebrew script and dated to the 8th century BCE. It describes how two construction crews, working from opposite ends, dug a tunnel through 500 meters of bedrock to channel water from the Gihon spring into the city of David. The inscription is famous not only because it is one of the oldest Paleo-Hebrew inscriptions ever discovered and because it describes an ancient engineering marvel, but also because of its connection to 2 Kings 20:20:

The rest of the deeds of Hezekiah, all his power, how he made the pool and the conduit and brought water into the city, are they not written in the Book of the Annals of the Kings of Judah?

According to R.B. Coote in the Anchor Bible Dictionary, "It is the nearly unanimous view of historians that the Siloam tunnel is Hezekiah's conduit, and that the inscription in it was written shortly before 701 B.C.E." The conduit is also mentioned in 2 Chr 32:30; Isa 22:11 and Sir 48:17. Isaiah's perspective is a salutary reminder: "You made a reservoir between the two walls for the water of the old pool. But you did not look to him who did it, or have regard for him who planned it long ago."

Here's the text of the inscription (following Coote's translation):

1 [ ] the tunneling, and this was how the tunneling was completed: as [the stonecutters wielded] 2 their picks, each crew toward the other, and while there were still three cubits to g[o], the voices of the men calling 3 each other [could be hear]d, since there was an increase (in sound) on the right [and lef]t. The day the 4 breach was made, the stonecutters hacked toward each other, pick against pick, and the water 5 flowed from the source to the pool [twel]ve hundred cubits, even though the 6 height of the rock above the heads of the stonecutte[rs] was a hundred cubits! (Click here for a transcription of the original Hebrew text.)

As Jerusalem was still under the control of the Ottoman empire at the time, the inscription was moved to Constantinople (now Istanbul) around 1890 and added to the collection of the Istanbul Archaeological Museum, which opened in 1891.

The inscription is behind a protective covering, but unlike the statue of Artemis at the Selçuk Archaeological Museum, where no-flash signs are prominently displayed, the nearest museum guard was happy to let me photograph the inscription however I liked. 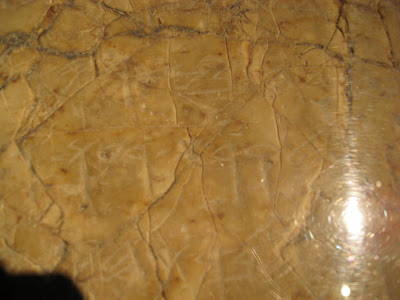 I hoped the guard was bemused rather than offended at my delight in photographing a non-Turkish artifact.

Obviously, we remarked as we walked away, Israel would like to have the inscription back. But it seemed hopeless. If you have to go to Berlin to see the great altar of Pergamum or to the Ephesus Museum in Vienna to see many of the artifacts from Ephesus, what hope does Israel have of acquiring the Siloam inscription? Everyone wants their own antiquities returned to the country where they were excavated, but beginning the process would set a dangerous precedent, because it would mean that the country requesting the antiquities would have to consider returning the antiquities in their possession that originate in other countries. In the case of popular exhibits, they would also run the risk of losing revenue--though that doesn't seem to be an issue in Istanbul.

My ears perked up this summer when I heard that Israel has been negotiating with Turkey for the return of the Siloam inscription. Various media reports made it sound as though negotiations are moving ahead. Back in September, in fact, Jim Davila noted a Washington Times article that announced a deal had been reached. Since I have heard nothing further since then, Todd Bolen's response--"Don't believe it"--seems correct. Negotiations to return the inscription have been underway for the last 20 years.

The saga continues:
Click here for the Turkey Travelogue Index.
Posted by d. miller at 11:30 PM